Critical art from Tunisia, created before and after the revolution. Virtual group exhibition. 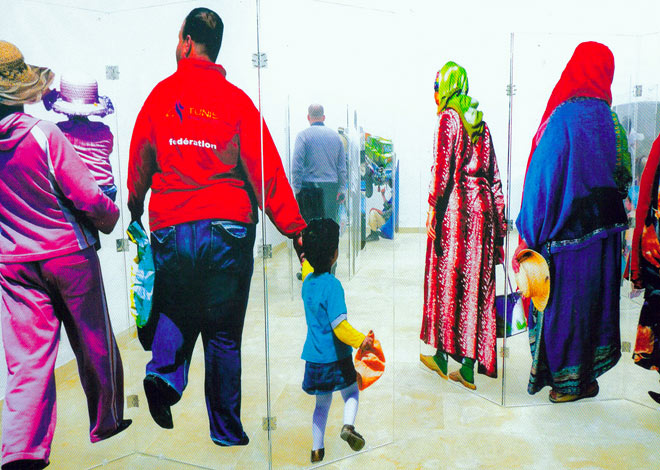 The Tunisian artists in this virtual exhibition belong to different generations. What unites them is their dignified attitude and the courage that they had during the period that preceded the Revolution, a period in which oppression was at its height. These artists fought in a difficult local artistic context. Several of them pursued multi-faceted cultural actions that included artistic creation, teaching art, art criticism, organization of exhibitions, etc.

For the majority of them, working inside the country was of capital importance. It was necessary to work first to reinforce the foundations of the local artistic scene before seeking international visibility. The majority of the artists presented here are not those Tunisian artists whose names come up the most on the international contemporary art scene. However, their talent is immense. There are numerous reasons for this anomaly and these reasons are internal as well as external.

The internal reasons include a lack of professionalism for many of our artists and our artistic structures in an artworld that is hyper-professionalized. The absence of museums or foundations, whether public or private, for modern and contemporary art in the country, as well as the absence of a cultural politics worthy of its name, are the internal reasons for this invisibility.

As for the external reasons, they are relative to an international art system that maintains a certain hegemony in which the voices from Southern countries are not sufficiently heard. The decision-makers in the Northern countries are more interested in an artistic production from the Southern countries that would comfort them with what they think is "good" contemporary Arab art.

This production corresponds to stereotypes that have found a new skin following postcolonial history. Indeed, the Islamic veil, the Arab woman depicted as oppressed, Islamic terrorism, and war constitute the subjects that facilitate access to international visibility for artists from the region. Many of the artists who have obtained a certain notoriety complain about this phenomenon which excludes part of their artistic production. The Moroccan artist Mounir Fatmi even speaks of a hidden demand when he evokes the attempts by Western decision-makers who invite him to prepare an artwork.

Today, thanks to the Revolution led by the Tunisian people and which spread throughout the Arab world, as well as the declared desire to finally let them speak, another part of artistic production has found the means for greater visibility. This could permit a greater illumination of artistic creation today so that the image that emerges of it comes closer to reality.

Aïcha Filali is one of the rare Tunisian artists who has never stopped reinventing herself. What characterizes her artistic work the most is her critical and non-reverential critique regarding the art world, whether Tunisian or international.

The question of elitism, of distinction according to Bourdieu’s formulation, constitutes a reoccurring problematic in her artistic proposals. In the work presented here, taken from her installation, L’angle Mort (The Dead Angle) at Galerie Ammam Farhat, March 2010, we see photographs of "simple people," affixed onto Plexiglas panels, which the artist "installs" in the gallery space. These people, who are not usually part of the "very select" public of art galleries, appropriate a space from which they are socially excluded. A few months later, in January 2011 and this time in reality, they would appropriate the political space at the front lines of those who chased the deposed president from the country.

Mohamed Ali Belkadhi, more commonly called Dali, is one of the most gifted artists of his generation. His work is multiform and has a real sociological foundation. He alternates between photography, installation, painting, and text in order to accomplish his reflections. At the end of 1998, he presented an artwork, which caused him a lot of problems with the previous regime. It was a series of 60 cans that bore the inscription, "A drink to make the Revolution," with the effigy of Che Guevara printed on each can and with the text, "Potable and stimulating solution for any person seeking revolution." Presented in the windows of the Gallery-Bookstore Millefeuilles, the cans were quickly spotted and seven police officers turned up at the artist’s house one night and took him to the police station where he was interrogated for several hours.

Fakhri El Ghezal received his degree from Tunis’s Institute for Fine Arts in 2004. He was trained in engraving and photography and was selected for Bamako’s Rencontres photographiques in 2007, where he presented a photographic project entitled, The Abdel Basset Patchwork.

The series Otages (Hostages) was made in 2007. The theoretical basis of this work is media manipulation and the media’s lies about the image of that which led the United States to invade Iraq in 2003. With his work, the artist tells us that we are all the "hostages" of this global system that manipulates us.

Halim Karabibene is one of the few Tunisian artists to have achieved international notoriety. He became known in the 1990s due to the caustic humor of his collages. For the last few years, he has pursued multidisciplinary action in order to prompt the public authorities to inaugurate Tunisia’s first National Museum of Modern and Contemporary Art (MNAMC). Halim, using social networks, conferences, Happenings, and exhibitions virtually animates this museum while waiting for it to appear. The Cocotte (Pressure cooker) is the symbol of the MNAMC, a pressure cooker ready to explode.

ismaël (written in lowercase) is a video artist and a cinema lover. His oeuvre has not yet received the honors in Tunisia that it merits, as video art does not yet receive significant attention. Without making political or aesthetic compromises, this artist distinguishes himself with his sharp critical sense that he develops in his written reflections and his videos. The video entitled TV01, from which screenshots are exhibited here, is a mix of two television shows, one religious and the other culinary, that are very popular in Tunisia during Ramadan. In his video, ismaël mixes the sound of the culinary program while we see the images from the religious program and vice versa. TV01 critiques both the prevailing poor taste and the religious program, which was subsidized by a relative of the deposed president who sought to take power.

Mehdi Bouanani is a young Tunisian artist who works in France and who exhibits regularly in Tunisia. He has made a number of series of paintings that present controversial political figures. Portraits from the Bey’s dynasty mix with those of the first Tunisian president, Habib Bourguiba, or even the Iraqi dictator, Saddam Hussein. These last two portraits were blocked by Tunisian customs when the artist tried to exhibit them in Tunisian in 2010. The artist had to submit to a police interrogation and his exhibition could not take place.

Mohamed Ben Slama is a tireless painter. He has always found ways to titillate the authorities with humor and flippancy, without ever being caught. In his paintings, the Islamic veil and bearded characters mix with sexy and nude figures. Ben Slama comes from a pictorial current with decidedly Tunisian roots. His predecessors include the artists Guider Triki, Habib Bouabana, and Lamine Sassi. In one of the series that he presented in Tunisia a few years ago, these people hold a sign that reads "RIEN (NOTHING)." This "nothing" wanted to say many things, among them the lack of freedom and the repression exerted by the previous regime against those who dared to critique it.

Nabil Saouabi's &nbsp;Le Salut de la peinture (The Painting’s Salute) is a Happening that occurred on 21 May 2009 at the Abdellia Palace during the 7th Spring for the Fine Arts in La Marsa. In the video that documents this Happening, Nabil Saouabi attacks the Tunisian Ministry of Culture’s Purchasing Commission head-on. This commission, which purchases artworks for the State, is much criticized by artists because of its opaque operations, its questionable management, and its vague objectives. The artworks it purchases are stockpiled in inappropriate places and hence are at risk of being ruined. The State remained deaf to demands by the artists to reform this obsolete structure. It was when the artist learned that the so-called commission had decided to purchase his work that he decided to destroy it and to divide up the pieces of this painting among the exhibition’s visitors.

Nadia Jelassi's work Vista lil 9albèn (Retourner Sa Veste/To Switch Sides) [1] comes from the solo exhibition, "En rupture d’assise (Breaking with the Seat)," at the Kanvas Art Gallery in October 2010. The exhibition’s theme was the chair, which could symbolize power. The artist removed the chair’s seat and then played with its back. The artwork presented here warns of the behavior of certain Tunisians who collaborated with the previous regime and who hurried to "switch sides" after the revolution.

Wassim Ghozlani’s photographs are part of the series Tunisia 140111, corresponding to the date of the Tunisian Revolution’s culmination, which sent the former president into exile. Many young Tunisian photographers made interesting work during the disruptions that the country experienced in December 2010 and January 2011 and Wassim Ghozlani is one of these photographers. He is a photographer with an eye that is sharp, funny, and poetic. Here, he delivers three images that say much more than a long speech about the Revolution for Liberty and Dignity in Tunisia. Indeed, the Tunisian Revolution was greatly aided by videos taken with mobile phones and posted on social networks. This is what one of Wassim’s photographs shows us. The anger of the Tunisians, known for being pacifists, was also encourages by the extreme violence and the premeditated murder that Ben Ali’s regime exerted over the Tunisian people. The image of the graffiti tag speaks of this repression with modesty and humor. Finally, the explosion of the 14 January 2011 revolt on Avenue Habib Bourguiba is materialized in a photograph that is emblematic of the scream of a free woman.

Ymen Berhouma is a young, self-taught artist. She was introduced to the artistic world because of her vibrant painting that deploys a certain naïveté in the positive sense of the word. The characters that she creates invite us to dream and are close to children’s stories. Little by little, as she established her technique, the painting by this young Tunisian darkened and became charged with tension. Ymen does not stop experimenting and she moves across media as diverse as sculpture, drawing, and installation.

Ahl Al Kahf (People of the Cave) is an anonymous collective that defines itself on its Facebook page as "a movement of young people from Tunisia, anti-Globalization and anti-Orientalism, born in Revolution". This movement was particularly active during the sit-in held in the Tunis Casbah in order to bring down the first post-revolution government, which was comprised of members of the previous regime. The movement then continued and distinguished itself with graffiti works in the major arteries of the Tunisian capital. Ahl Al Kahf’s work pays homage to global figures of resistance and playfully attacks those dictators remaining in the Arab countries in the image of the bloodthirsty Gaddafi.

This virtual exhibition was initiated and commissioned by:
Nafas Art Magazine.

Critical art from Tunisia, created before and after the revolution.

Initiated and commissioned by: