Her "Passage" photographs, taken in Jordan, are part of an exploration of light markings on paradoxical landscapes. 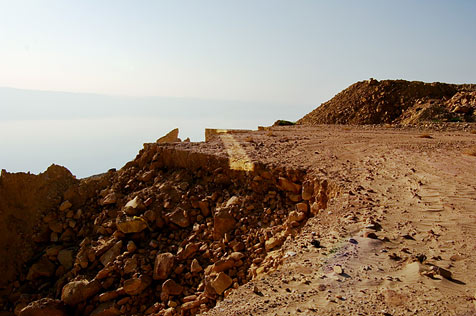 The photographs configuring the "Passage" series are part of a continuing exploration of light markings on paradoxical landscapes made in collaboration with landscape architect Lara Zureikat. As open horizons often symbolize hope and wonder to the onlooker, in this series of images natural or man-made barriers, such as historic ruins or bodies of water, disrupt the visual plain and thereby deny passage through the land. The light markings on the landscape not only point to the implied physical obstac¬les but also offer themselves as a metaphorical gateway through the territory.

The project began at the Dead Sea in Jordan in 2006. Here, the photos show a rocky desert terrain, which abruptly ends, overlooking a sea and a hazy mountainous horizon. Rather than symbolizing open territory and possibility, the political reality of the sea serves as a border between two lands where passage across the sea is restricted. In this project, the projected light acts as transgressing gesture, bridging the two landscapes.

The images from the Dead Sea inspired a second installment in the "Passage" series that took place at the Citadel ruins in Amman, Jordan 2007. Here the obstacles in the landscape are the ruins of a wall built to protect an ancient Roman castle. While the ruins stand proud overlooking the sea of a densely populated stone city, the crumbling in the stone structures implies an increasing gap between the symbols of historic greatness and modern reality. The light markings that point to the ruins also place a decaying past between the viewer and horizon, suggesting a need to confront the past along one’s forward journey.

In all cases, the vulnerability of the obstacles and the defined presence of the light passages in the foreground challenge the perception of what is material and what is immaterial. In this paradox, the integrity of the material world and its socio-political consequences come into question, as spiritual solutions to these barriers are considered.