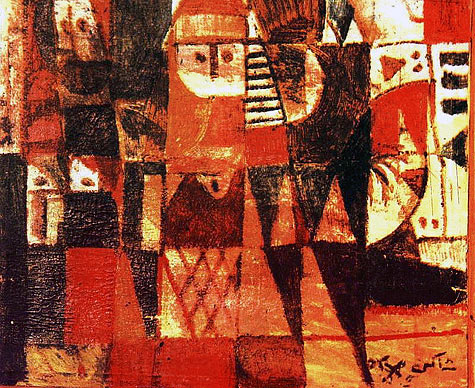 Shakir Hassan Al Said (1925-2004) was one of Iraq's most influential and prolific artists. A theorist, teacher and historian, he personified a remarkable synthesis of modernity, Islam and Arabness. His philosophy of art was rooted intellectually in both Islamic Sufism and Western modern thought: structuralism, semiotics, deconstructionist, phenomenology and existentialist thought. His work exemplifies "Iraqi" negotiations of modernist and postmodernist conditions. His theories charted a unique contemporary "Arabo-Islamic" aesthetic, and thus initiated a possible alternative for valuating local and regional art based on categories other than those allowed through the exclusionary Western canon of art history.

Along with Jawad Salim, Al Said co-founded the Baghdad Modern Art Group in 1951, and wrote the first manifesto of the group. His work of the 1950s and 1960s, expressed the ideals promoted by the group in their quest for a distinctive local style, synthesizing both indigenous and international trends and expressive of individuality and independence: "We wanted to clarify to Iraqi artists in general, and to ourselves as an art group in particular, that istilham al-turath, (seeking inspiration from tradition) is the basic point of departure, to achieve through modern styles, a cultural vision." [1]

Nevertheless, under the influence of Sufism Al Said's work morphed into a search for the spiritual in art through abstraction. His search for the spiritual, however, was aimed at more than the content and format of the work, but rather at the epistemological meaning of art itself. In fact his notion of "making art" is a form of a neo-Islamic aesthetic in its principles, advocating an annihilation of individuality. Art to Al Said was not a "creation" but a "contemplation." It is of course a contemplation of the glory of God, where the personal self disintegrates into the eternal one. Al Said explained the concept of "art as contemplation" in his Contemplative Manifesto, published in 1966. [2] Contemplation, he wrote, is the artist's true vocation. Contemplative art accepts the world as a creation where humanity as a whole, artists included, can merely express opinions. Contemplative art becomes an abstract description of existence and a positive force that unifies humanity with the universe. This description is only possible through ascension from the self to the universal and descension from the human to the embryo.

Al Said, however, identified two types of contemplation: negative and positive. He saw negative contemplation as only a testimony to a "truth" found in the universe. It becomes positive when it explores "universal truths" through the work of art. [3] To Al Said, thus, art was another form of worship. Contemplation "is not an expression of the spirit as in Abstraction, or the visual as in representational trends, nor is it an expression of the unconscious and the world of dreams as in Surrealism, or of time and space as in Cubism. Thus, I shall describe the world through realization of my being by raising it to the level of phenomenological contemplation." [4] Contemplative art is a spiritual art that merges its exoteric, al-zahir, with its esoteric, al-batin (i.e. both are expressive of each other). Abstraction is only a beginning.

Al Said, thus, gradually abandoned figurative expressions and adopted the Arabic letter as a point of convergence for his compositions. During the period between 1958 and 1965, the letter was Al Said's transition from figurative to abstract; i.e. letters or words as mediators were woven in the composition or appeared as part of the human anatomy ( Vagabond Family, 1961). His oeuvre presented unique and significant experiments with the Arabic letter in modern Arab art and can alone summarize the entire history of Hurufiyah. His fascination with line, which was evident in his earlier work as well, is a unique experiment in contemplating and negotiating time and space. Al Said's negotiations and understanding of time through its collapse into space is exemplified in the various stages of his artistic development. Moreover, it was to be a major influence in the understanding of time in Iraqi contemporary art as well.

Al Said search into notions of and relationships between time and space began early in his experiments as part of the Baghdad Modern Art Group and their ideals of istilham al-turath; a theme itself predicated on the notion of collapsing time and space. Nevertheless, the "One-Dimension," al-Bua'd al-Wahid, Al Said's complex theory embodying a philosophy, a technique, and a style, was the beginning and the height of his exploration of the Arabic letter. [5] It expressed the reciprocal relationship between time and space, between the visual and non-visual; a relationship Al Said contended as similar to that of body and spirit. [6] Following Merleau-Ponty's discussion of the visible and invisible, [7] Al Said located the one-dimension between the metonymy of the visible and the invisible. From a philosophical point of view, according to Al Said, the One-Dimension is eternity, or an extension of the past to the time before the existence of pictorial surface; to the non-surface. To Al Said our consciousness of the world is a relative presence. It is our self-existence while our absence is our eternal presence. [8]

Achieving the One-Dimension depends on transforming the cultural consciousness through dimensions from the level of al-azal (eternity) to the now, then to the eternal level of al-abad (forever). [9] Thus, going beyond the surface transforms its relative existence into an eternal one. The "One-Dimension," as a method of contemplating the visual world, presupposes that a two-dimensional pictorial surface is also its existence before becoming a surface. Thus, a work of art does not end or begin on the surface, but penetrates through it to its beyond. Line, in its true meaning as a continuous series of points devoid of visual or material dimensions, is the eternity of the surface. Al Said's definition of line was rooted in Islamic thought. According to al-Khawarizmi (d. 846), line is the quality of the one-dimension, it is a length only and could not be seen except with a surface (length and width). [10] Ikhwan al-Safa (The Pure Brethren, end of tenth century) added, that the visual line's origin is a point, if regulated the line will appear visually. [11] Thus, line is the formal interpretation of the one-dimension.

Nevertheless, it was "Spatial Reduction," al-Tajathur al-Makani that Al Said was seeking to achieve through his concept of the "One-Dimension." He defined "Spatial Reduction" as a retractive study into the essence of under-structure. It was a form of an "archeological methodology," which included the reduction of time as well. It was the realization of the intersection of ideology (of art thought centered on representation through three dimensions) and utopia (experiments of post-abstraction); of merger and destruction. Al Said's definitions of ideology and utopia drew from Paul Ricour's writings, and they are both achieved through steps that negotiate a specific collapse of time and space. The "temporal now" is thus expressed through spatial means.

Technically Al Said sought spatial reduction through transcending the pictorial surface. By piercing through it, decollage, he connected the two-dimensional world of art with that of non-dimensional space through slashes, cuts, openings and cracks. The surface's existence is only represented through dimensions: space is transformed to dimension and then dimension to non-dimension (Letters of Time and People and Nature and Intellect). To Al Said, nevertheless, "spatial reduction" remained an art vision based on dimensions. He saw space as the real property of plastic arts not time; time was only a secondary element; i.e. an opening in the pictorial surface is a temporal void. Another technique he experimented with was the double-surface painting: painting on both sides. In this technique, time as an art element is personified in the painting's reception in the round incorporating motion in the movement of the viewer around the painting.

Al Said's fascination with the conception of the One-Dimension was rooted in its ability to realize form's evolution from the ancient Near East to the Middle Ages (the Islamic age) through modern methods. It thus allowed for historical continuity without denying rupture. It was, thus, the ultimate manifestation of istilham al-turath. To Al Said, it also became synonymous to istilham al-harf (seeking inspiration from the letter); "taking the letter or the number as a point of departure to arrive at the meaning of line: as pure plastic value." [12]

In Al Said's studies of the One-Dimension through the letter, and his objective of realizing the notion of al-zamam, the meeting point between the beginning and the end, he experimented with the science of al-jafr, the numerical symbolism of letters. Al-jafr, a science established during the Islamic age, is based on the letter as a representation of space and qualities, and on an existence of a relationship between letters and numbers: "Letters express qualities of materials and numbers reveal secretes they contain." [13]

Ultimately Al Said's experiments in time and space led to what he termed "the experience of environmental truth in art." As a new form of realizing the One-Dimension, istilham al-sahnah al-jidariyah, seeking inspiration from or integrating "the wall" in art, became Al Said's last obsession with expressing the collapse of time into space until his death in 2004, as the result of his second clinical depression that left him debilitated during the last year of his life. Al Said's work is a testimony to the depth of theoretical and historical difference (localness) despite of surface "global" visual similarities.