The politicized art scene in Palestine. Project on the topic of waste, Transmediale Berlin 2008. 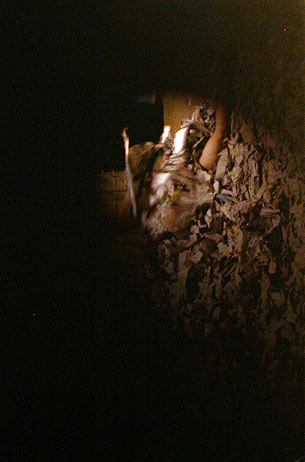 Checkpoint Kalandia is reminiscent of a border crossing in divided Berlin. Massive concrete blocks on the sides of the roads channel the traffic. Buses, trucks, and private cars wait to be processed. On either side, the massive, gray border wall extends to the horizon, where it disappears in the dusty haze. On the Palestinian side, travelers wait in long lines in front of the barred turnstiles until a brusque voice calls them to the proper window.

Diana Mardi holds a microphone through the grate, recording the sounds and conducting interviews. A woman from Ramallah says she wants to visit her son in the hospital in Jerusalem. Every morning, she stands in line here in Kalandia to enter Israel; but she is not permitted to stay overnight there.

Diana Mardi is in her mid-thirties. She is an artist and collects material. In Fall 2007, almost two dozen painters, photographers, and visual artists from the West Bank and Gaza came together with the German artists’ group Blackhole Factory to work on an interactive installation of videos and sounds – and of trash collected at waste dumps. The exhibition, titled Trans4m Orchestra, has already been shown in Gaza and Jerusalem and will be on display in the framework of the art exhibition Transmediale.08, which begins today in Berlin.

Waste was also Diana Mardi’s assignment this dusty October day. "Waste of Time" is her theme. Since the Oslo peace agreement divided the West Bank into three zones separated by checkpoints, travel has become a devourer of time for Palestinians. "No one can say when he’ll arrive anywhere," says Diana Mardi. "Appointments cannot be kept; one spends much of one’s life waiting." She lifts a piece of plastic. It is the cover of a Palestinian passport.

Diana Mardi is a Palestinian, but also a citizen of Israel. She grew up near Tel Aviv. Her husband is a Palestinian from Ramallah, but the Israeli authorities do not recognize the marriage. Diana lives with her two children in Israel, because the health and school systems are better. Her husband has never been to her home; he cannot get an entry permit. Here too: Waste of Time. The years pass and the Mardi family cannot come together.

Being an artist in the Palestinian territories is a particular challenge. Ramallah, the seat of the Palestinian Autonomy Authority and something like the capital of the West Bank, has a population of just under 60,000. Here there are at least a theater, a conservatory, and a culture palace. But the artists’ scene is easily surveyed.

What motivates an artist in the face of these existential problems? "It is the attempt to live an everyday life in this country," explains Majdi Hadid, a 32-year-old photographer. "Palestine has more to offer than political crises." A lofty ambition in the middle of hopelessness. The peace negotiations draw only a shrug of the shoulders from many Palestinians.

Disappointments have accompanied Majdi Hadid all his life, as well. He comes from one of the families that once founded Ramallah; he grew up here, with hope for peace. Later he studied Graphic Design in Canada. But he has returned, with hope for peace. Like most of his colleagues, he cannot live from his exhibitions alone. He earns his money in an advertising agency. A few years ago, Majdi Hadid came to Berlin for two weeks with an artist’s stipend. He had ideas about making a comparison between Ramallah and Berlin – he was thinking about the Berlin Wall. But 15 years after its fall, he could find hardly any traces of it. "While for you two countries are growing together, for us one is being divided," he muses. His art is bound up with yearning. For what is distant. For childhood.

Majdi Hadid drives out of Ramallah in his small car, going back 20 years. He stops at a river valley that furrows the plain. The slender watercourse flows through a sea of fragrant mint plants. But the water is rust-red; trash lies everywhere. In his childhood, he explains, families in Ramallah made this a goal for outings. Then the Israelis built a settlement on the mountain facing it. Since then, a heavily guarded road divides the fertile valley from Ramallah. The valley can be reached only by a long detour. Since then, the valley is orphaned and has deteriorated into a trash heap. Majdi Hadid takes photos. Art is politics. Even in this remote valley.

Watercolors hang in the rooms of the Young Artist Forum, Ramallah. The further to the back one goes, the stronger the odor becomes. Here the artists work on their objects, in the midst of trash. Mohammed Harb and Sharif Sarhan from Gaza are present via telephone conference. The Palestinian painters are also working on this project. But Gaza is sealed off; neither of the two participants received a permit to traverse Israel to come to the West Bank. The telephone connection is interrupted by a rushing sound and ringing; it is repeatedly cut off completely. As if one were speaking with the occupants of a space ship.

"For months it has not been possible to bring artists from Gaza to Ramallah," says Farid Majari. The head of the Goethe Institute, who supports the project, cannot conceal his indignation. "Palestine is de facto divided. There is hardly any communication and practically no freedom of travel between the parts." Even a German cultural organization has unpleasant difficulties every day, depending on the current military and political situation. When the artists wanted to collect materials from a waste dump in Nablus, the Israeli border guards did not let them through.

The German artists, too, are surprised at the political dimension of their work. "Whatever we speak to people about: they all bring the political background into the conversation," says Elke Utermöhlen from the artists’ group Blackhole Factory. She felt this very strongly when she was visiting waste dumps in the West Bank with Palestinian colleagues. The result welded the group together. The artists looked for material for their installations, conducted interviews with the dump workers, and documented the latter’s work

Baschar Zarour and Imam al Hasnya thought the idea of visiting a waste dump sounded completely insane. But they went along. Like many of their colleagues, they had no idea that children work at many of the unauthorized dumps in Ramallah, Nablus, and Hebron. The children sort out recyclable materials and burn mattresses to recover the metal springs – hard work in a stinking, contaminated environment. Tears fill Imam al Hasnya’s eyes when he recounts it.

These dumps are an environmental disaster: gasoline, oil, acids – it all trickles into the groundwater. The group found pharmaceutical waste from hospitals that had been thoughtlessly discarded. And patients’ files with complete names, diagnoses, and X-ray photos.

Baschar Zarour used the material from the waste dump in Nablus to build a man who hangs head down from one leg in the air. An old soccer ball is the head, wooden poles the legs. For Baschar Zarour, this is a tarot card figure symbolizing the helpless situation in which the Palestinians find themselves. "For me, the world is upside down," he says.

trans4m orchestra
Art project by Palestinian and German artists, dealing with the topic of waste in Palestine.

Presented in the framework of the Transmediale Festival
29 Jan. - 3 Feb. 2008