Audiovisual project with photos and interviews done in an orphanage in Kabul. By Farzana Wahidy & Shikiba Babori. 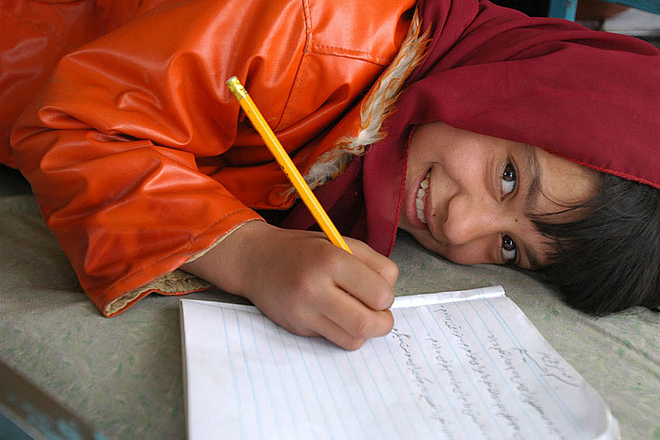 The orphans of Afghanistan – who are they? They don’t know the date of their birth, have no birth certificate, have lost every thread of any family network, and celebrate no holidays. Some of them were forced to watch as their parents, relatives, or friends were manhandled, raped, or killed. These children are unprotected and are exploited for the goals of diverse political and religious groups – first as Koran pupils and later sometimes as fighters.

We are presenting these children, because my, your, our responsibility is to look, understand, and think about them, because these fates ultimately also have consequences for our lives. For three decades, war ruled in Afghanistan, and we experience the country in connection with the conflicts of world power politics and international terrorism. But in the country, the war leaves not only ruins, poverty, and unemployment, but also countless orphans. UNICEF estimates the number of orphans around the world at 143 million. Afghanistan alone has 1.6 million. We are only marginally aware of their fates. That’s why there is this exhibition.

What do we know about these children? Where do they find refuge today? Who takes care of them? The audiovisual exhibition aims to create access to the world of the orphans. A direct glimpse of their daily lives permits differentiated perception. Through the exhibition, the orphans can send a message and thereby shed their anonymity. Here they are the center of attention and let us know their wishes and needs. Access to public attention is the prerequisite for dialogue.

The pictures and interviews were created in February and March 2007 in an orphanage in Kabul. The children there have the possibility to eat, sleep, and attend school. A total of 15 children aged seven to fourteen were portrayed. The exhibition shows three photographs of each of them and accompanying text plaques summarizing what each child says about himself or herself. In parallel, the exhibition room is filled with ambient sounds: the children’s voices, their statements, their favorite songs, and poems. The result is a dense atmospheric impression that presents the children as authentically as possible. The pictures and the personal stories enable the visitor to enter a world that until now has been foreign.

The exhibition’s ambition is to stimulate discussions, provide impetus for viewers’ own thinking about the topic, and, not least, open up perspectives. But most of all, it aims to be a mouthpiece for those who otherwise are never heard: the orphans.

Farzana Wahidy
Born in 1984 in Khandahar. Lives and works as a photojournalist in Kabul. She was not able leave Afghanistan during the war years. Her mother died very young and her father was long held in a prisoner-of-war camp, where he was tortured; so at the age of 13 she had to raise and feed her three younger siblings. For her, working as a journalist means being free and independent. Because of the high rate of illiteracy in Afghanistan, she uses pictures to try to convey her surroundings and thereby her daily life. She declined a call to work in the Afghan President’s press office in Kabul so that she could develop in her work, free of censorship and political directives.

Shikiba Babori
Born in 1966 in Kabul. Lives and works as an ethnologist and freelance journalist in Cologne. On her numerous journeys to Afghanistan, she put together not only diverse reports, but also a short documentary film on a school project near Kabul and a radio play for station WDR. In 2004, she headed a training course for female Afghan journalists in Herat. Since 2006, she has worked on developing of the network of female journalists in Afghanistan, KALIMA – a news agency devoted to fostering a constructive dialogue by disseminating background information on socio-cultural topics.

As a traveling exhibition, the project is available to other event organizers, as well. If you are interested, please contact Shikiba Babori: babori(at)kalima-news.com

As a traveling exhibition, the project is available to other event organizers, as well. If you are interested, please contact Shikiba Babori: babori@kalima-news.com