From "My Brother - My Enemy" to "Centauromachy". The polemic artworks of the Kazakh artist. 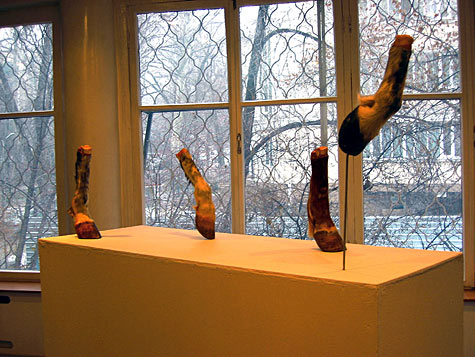 The Yerbossyn Meldibekov’s photographic work "My Brother - My Enemy" (2000) has become a kind of trademark of contemporary art from Central Asia. Exhibition curators in Mexico, Italy, and Poland have put it on the covers of magazines, catalogs, and art guides and on posters and invitation cards. At first sight, this testifies to the fact that this powerful work corresponds fairly exactly to the general ideas about the region; i.e., it confirms a certain stereotype that has emerged from the tangle of florid concepts of European Orientalism - namely the aggressiveness, exoticism, and the "mystery" of the East.

On the other hand, it is obvious that merely exploiting an idea is not enough to make one famous. That would require that one cause an explosion in the subway or draw caricatures, confirming theory by means of practice. But one doesn’t go as far as to conduct a thorough anti-Orientalistic discourse with references to Edward Saïd or Tarik Ali. Yet Yerbossyn Meldibekov clearly belongs to those who take part in polemics: he sincerely tries to come to terms with the situation and he confirms the conclusions of those who oppose European prejudice. In point of fact, Asian reality is difficult to modernize, because people cling to values, some of which have petrified into strict dogmas. But that is the specific quality of the region: it tends to Isolationism and thereby underscores the priority of the local over the general human mentality. Archaism is conspicuous in the current discourse, but the defensive line is visibly crumbling, and not only in theory.

The original impulse behind "My Brother - My Enemy" is a regional problem of Kazakhstan: the existence of a system of competing clans and tribes competing for political influence and control of financial flows. The work of art is structured like a report based on a traditional ornamental motif: a heavy module, laconicism, and the use of a negative-positive composition from a Kazakh felt carpet. The work is many-faceted and takes up the problematical relationship between the neighbors in the region, which in the Soviet period was propagated as "brotherly" and was seen as a definition of human relations in themselves. After September 11, 2001, the work "My Brother - My Enemy" took on more explosive power, because it seems to confirm conflicts of humanity that have now become more visible in the wars in Afghanistan and Iraq, as well as in the caricature dispute, the "collapse of civilization", etc.

The phenomenon of this photo work’s lightning rise from local to global significance is confirmed by a formula of "artistic anticipation" that is banal but important in characterizing Meldibekov: everything he expresses seems to come true. No less significant than "My Brother - My Enemy" is the video work "Pastan" (2003), in which a man with an Uzbek cap, a tjubeteika, is defenselessly exposed for hours to a hail of slaps. This recalls the quietude of the population of Uzbekistan in 2005 when government troops in Andijan carried out a massacre. The version "Pastan 2", shot in Bishkek and shown on the display of a cell phone, anticipated the unending Kyrgyz revolution and the abhorrent execution of Saddam Hussein.

The artist is masterfully able to create a strong, precise, and passionate oeuvre, whereby his directness arouses associations of cruelty and "Aziatchina" [1]. His works are like a great mirror that immediately casts back upon the viewer splinters of metaphors, thoughts, and allusions. After one has recovered from the shock of viewing "Pol Pot" (video, 2000; living people are crushed by a pile of stones), one is riveted by references to history (Genghis Khan, Tamerlane, the "pyramid of Isfahan") and to cultural stereotypes (verses by Michelangelo, pictures by Vereshtshagin, the Soviet film "White Sun of the Desert" (beloe solnce pustyni), and Terminator and by anticipations of the future: photographs from Abu Ghraib and even computer games like "Snood". The return from catharsis makes the personality’s lack of freedom understandable in principle: we are all somehow buried by cobblestones consisting of rushes to judgment, prejudices, traditions, religious limitations, or norms of behavior that are part of what is called good manners.

Since the author has sufficiently tried out postmodern practices, he consciously exploits his own ethnic traits by deepening and playing with stereotypes of the Orientalist discourse; it is no coincidence that self-portraits are included in many of his works ("Pastan", "My Brother..."). In the installation "…baj batyry" (2007), five otherwise identical busts are distinguished solely by the decorations on their warrior’s helmets. Here is an obvious parallel to the uniformity of Kazakh monuments, which display only a single heroic figure. But since the cult of personality around President Nasarbayev has not yet completely blanketed Kazakhstan, the artist once again uses traits from his own portrait. In this sequence, which could be continued, and in this kind of depiction, the unchanging portrait becomes the impersonal type of a kind of ruler’s monument, which could appear in this or a similar way in any of the authoritarian systems of Central Asia’s oil- and gas-producing countries.

In the photo series "Centauromachy" (2007), the artist plays with his favorite material, the pelts and bones of animals. The "Portrait of an Anti-Terrorist", a camouflage with a horse’s skull instead of a face, ridicules the efforts of the Central Asian rulers to suppress every form of protest and independent thinking using the excuse of the "struggle against international terrorism". "Winnie the Pooh", a teddy bear sewn from the bloody pelt of a horse turned inside-out, is an extremely barbaric invention. The television images of children killed in Iraq or Palestine look less shocking. Another shocking work from the series "Centauromachy" shows the pelt of a horse, from which extends the lower body of a man standing on his head, with a feebly dangling genital exposed for all the world to view.

Destitute Asia, torn by wars, corruption, and intrigues and divided up among a powerful few for access to its raw materials, is nonetheless in a position to evaluate itself in the global context and thereby not only to become aware of its situation, but also to bring forth powerful works of art and ideas. The East truly remains the East. Its "mystery" and its "exoticism" are displayed in the fact that vibrant people live here, people consisting of bones, flesh, and nerves and who - often - have keen minds.