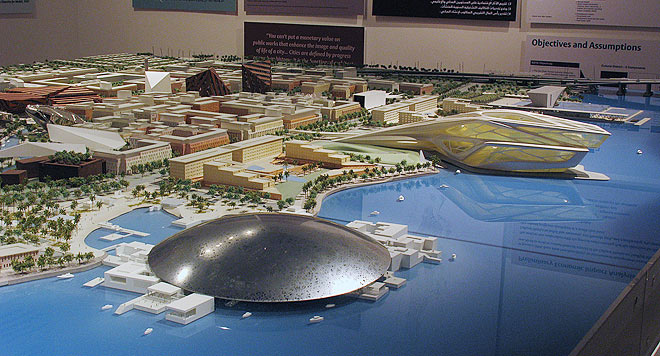 Key dates:
21 June 2005 - Sheikh Sultan bin Tahnoon Al Nahyan, Abu Dhabi Tourism Authority Chairman, visits the Louvre and expresses the wish of a partnership with the perspective of constructing a museum in Abu Dhabi.
6 March 2007 - signature of the agreement between the Government of the Republic of France and the Government of the United Arab Emirates.
The opening is expected to be in 2012.

About the concept of architect Jean Nouvel:
"We have covered it with a large dome, a form common to all civilizations. Made of a web of different patterns interlaced into a translucent ceiling, the dome lets a diffuse magical light enter the space in the tradition of great Arabian architecture." Quote from Ateliers Jean Nouvel.
Agreement with the Louvre:

The museum of Abu Dhabi is granted to use the name Louvre for the duration of the agreement, which is 30 years.

For 10 years up from the museum's opening it will present artworks from French collections, specially from the Louvre, of comparable quality of those in usual display, in form of rotating loans for a length between six months to two years. From 300 artworks at the beginning, the loans will be reduced to 250 after 4 years and to 200 after 7 years.

The agreement represents a sum in the order of 1 billion EUR over thirty years, from which 425 millions go to the Louvre (with 150 millions EUR right after the signature of the agreement), and 550 million EUR for the Agence France-Museums (for the mobilization of the artworks, and for temporary exhibitions). Abu Dhabi will reserve for the progressive constitution of the own collection an annual budget of 40 million EUR. Moreover, Abu Dhabi agreed to pay 25 million EUR as patronage of the Louvre to refurbish a wing of the Pavillon de Flore, which will then carry the name of a distinguished personality of the Emirates.

The opening of the galleries will take place in successive stages: 2,000 sqm at the museum's inauguration, increased to 4,000 sqm after the 4th year, and to 6,000 from the 7th year on.

The galleries of the museum will leave room for confrontations between artworks of different periods and geographical regions, emphasizing the dialogue between civilizations in the field of the arts. A small part will be devoted to contemporary art which will be presented in response to ancient artworks, to highlight the continuity between epochs and to show how the perspective on older artworks is ruled by contemporary perceptions.
The Museum will also include an auditorium, a center of pedagogic, scientific resources and research, education areas for adults and children, conservation and restoration studios, café and restaurant.
Print version
all the texts, including sources