Here as the Centre of the World: Khartoum

Artists from various countries worked together with the neighbours of El Diem in Khartoum, Sudan. 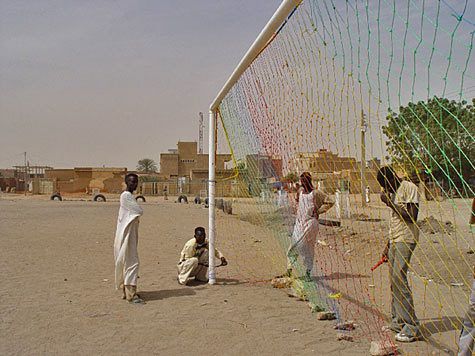 Presenting a workshop in Khartoum raises all kinds of complex questions and the most obvious one is, of course, if it is appropriate to initiate an art project in the capital of a country involved in a civil war. The participating Sudanese artists convinced us that it is of great importance to them and to the cultural environment and also of momentous significance to civil society in Khartoum to be connected to ongoing discourses and the flow of information that comes along with international art projects. Participating artists Abdelmoniem Abdiella Hamza, Duha Mustafa Mohamed and Rofyda Nour Aldyn played an important role in the preparation and organisation of the workshop.

During the past decades the artists in Sudan have been working in relative isolation because of the political situation. Artistic networks within the region and abroad are limited. The generation that had been educated directly after the country gained independence, still has strong ties with Europe and the Arab world. But for the younger generation such opportunities are unreachable for various reasons.

All Sudanese artists participating in "Here as the Centre of the World" have received their education at the department of Fine Arts of the Sudan University in Khartoum. The curriculum of this and other art institutions in Khartoum is largely informed by 19th century occidental academism with an Arab and African touch. Sudan University is the main 'gate' to reflection on contemporary art in Sudan.

The workshop as a "common project"

Using "Here as the centre of the world" as a starting point, the participating artists are asked to challenge their own place of origin as the centre of their world. By providing an alternative point of reference, the temporary residency within a new cultural matrix calls for a refraction of the artists knowledge of the world at large through the prism of the ‘new’ city. In order to experience the various facets of that prism beyond the more familiar setting of the studio or art centre, one street has been chosen in each city as a locus for artistic research. Artists are encouraged to work directly in the street, to talk to people whose daily life intersects with the street’s activities and to see how those site-specific interactions shed light on the wider socio-cultural context.

In each city the approach to the project largely depends on the merger of working methods and artistic languages used by visiting and local participants and the focus of the artistic leader.

Projects developed by the artists

The workshop took place in El Diem Street in the middle of El Diem quarter, a very lively popular district. This quarter on the outskirts of the former British colonial city centre was originally built for lower ranking civil servants. The typical round brick stone houses from this period are still a vital part of the image of El Diem, as are markets, sandy football fields and charcoal depots. Quite a few famous Sudanese musicians and football players grew up in El Diem. With its ever-changing population the quarter is a true mirror of recent developments in the region.

Although efforts were made to explain the project to the inhabitants of El Diem Street, the 'purpose' of the workshop stayed something of a mystery to the local population, especially during the first days. Everyone was wondering, if the artists were scientists investigating possibilities to regenerate the area. The older merchants were especially worried because they could still remember how they were forced to move from Khartoum 2, the city centre of El Diem, in 1949. To introduce the concept of a public-space art project to a curious Sudanese audience outside the art context proved to be both an adventure as well as an overwhelming experience.

For Emily Williams (UK) the story one of the older shop owners of El Diem market told her on the first day, was the starting point for her project. She began to dig a hole at El Diem market, trying to reach an older layer and collecting the soil in bottles to visualize the different layers. The bottles became part of an installation called "The Office," a cupboard like the ones used by many tea-ladies in the street. Finally, Emily filled the hole she had excavated in El Diem with soil from Khartoum 2. To quote Mohamed Mohamed - a journalist who wrote an article on the workshop in the Sunday newspaper - "Digging and filling is like a poem for El Diem, for this town floats on sand and shifts like sand".

The Sudanese artist Omeima Hasab el Rasoul portrayed inhabitants of El Diem with hazy mist surrounding their images. She printed the images on transparent paper. These photographs were presented in the window of an internet café together with x-ray photos. She wanted to emphasise that the problems with which the inhabitants of El Diem are confronted need to be looked at much more closely by society.

The starting point for the project jointly realised by Rofaida Nour Aldyn (Sudan), Julien Grossmann (France), Harair Sarkissian (Syria) and Baris Seyitvan (Turkey) was the almost symbiotic relationship that "story" and "history" seem to have in the place. Using retouched photographs, they created plausible past events and situations that might have taken place in El Diem. A local storyteller was asked to narrate these stories and to react to the pictures in public. In a poetic way, the artists were questioning the absolute value of images in an environment where oral language appears to be the main source of truth.

Dagmar Kriegesmann (Germany) acquired a discarded chair, which she repaired with the help of a local craftsman. She asked the local instrument builder to put strings on the chair so that this found object became a musical instrument. Together they performed a sound piece in El Diem Street: he playing on his guitar and she on her chair.

Waste material and garbage in El Diem Street are the ingredients of the work of Duha Mustafa Mohamed (Sudan). Together with the inhabitants of El Diem, she collected waste materials and changed this colourful garbage into an invitation to pay more attention to the environment.

Abu Baker Alkadro (Sudan) was intrigued by the representation of feet in relation to corporeal expression and the social environment. As the lowest parts of the body, they are often neglected. A mirror of society?

Several artists were intrigued by the large number of football fields in El Diem Street. Tatia Skirtladze (Georgia) made a rainbow-netting for one of the goals. The football players of Khartoum Talathah dissolved the patterns made Nikos Doulos (Greece). The artists had become acquainted with this professional football team while sharing accommodations in Khartoum. Reine Mahfouz (Lebanon) invited the players to El Diem and portrayed them on one of the many football fields in honour of the cooperation between the neighborhood, the team, and the artists.

Reine Mahfouz also gathered the 'tobe' (the traditional Sudanese dress) from several women she had met in El Diem during the project. She washed a number of different colourful tobes and hung them out in the street as an invitation for the women to tell their personal stories. The tobe represents the courage of Sudanese women, especially that of the tea ladies (preparing and selling tea in the street), who sometimes work under semi-illegal conditions in order to earn an income for their families.

You only have to visit one of the many barbershops in El Diem to become aware of its multicultural make-up. To celebrate cultural diversity, Abdel Moniem Hamza (Sudan) collected hair in one of the barbershops. All the different hairstyles came together in the word Diem – made from a mixture of hair that was glued onto a piece of fabric. He invited one of the famous singers from El Diem to perform in this costume.

Rana Hamadeh (Lebanon) was fascinated by the 'nomadic' nature of the spaces in El Diem. Spaces are always being constructed and deconstructed and change functions all the time. She gathered bricks from different parts of the street and with the help of children she had met in El Diem she created an imaginary space and documented the changes their construction underwent during a process in which it eventually disappeared.

Nisreen Absher (Sudan), Danielle Davidson (the Netherlands) and Jae Min (South-Korea) won the hearts of the inhabitants of El Diem by organising an event for the celebration of donkeys on Valentine’s Day. In close collaboration with the owners of the donkeys they organized a contest for the best-decorated donkey. By giving special attention to the donkey, they wanted to reappraise the animal, which also had an effect on the social esteem of the owners and their surroundings.

Gabrielle Schleijpen: Artist, educator and curator. Head of the Studium Generale Program of the Rietveld Academie in Amsterdam, and course director of the Dutch Art Institute in Enschede. Alite Thijsen: Artist, curator and lawyer. Founder of ZET Foundation, Amsterdam. Project coordinator of "Here as the Centre of the World".

Special thanks from the authors go to Mohamed Ahmed Mohamed Fadlalmola, journalist of Sudany Newspaper, and the Prince Claus Fund.

Here as the Centre of the World

Curators:
Here as the Centre of the World was conceptualized by Lucy Cotter, Gabriëlle Schleijpen and Alite Thijsen.