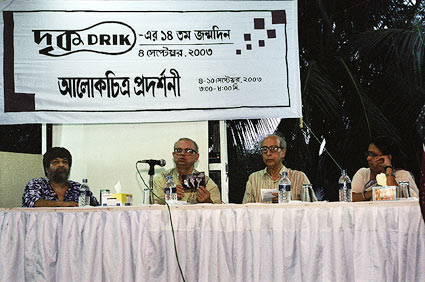 Considering the boom of the political in large exhibitions of the last years (i.e. Documenta11 and 50th Venice Biennale), with many works using photojournalism or documentary media, and – in the context of these events – of the celebrated discourse on the state of the world, one wonders why Drik has not attracted more attention in the international art world. Certainly, this is not absolutely necessary for an organization that meets with large recognition in other circles. Whoever takes the intentions of socially committed contemporary art seriously will find them in many ways more consistently fulfilled in Drik’s work than elsewhere. Drik’s motto, "images for change" is not just a smart publicity slogan, it is far more an ethos taken to heart by its members.

When in 1989, a small circle of professionals surrounding Shahidul Alam founded an agency for local media journalists in Dhaka, their "vision" (that is the meaning of the word Drik in Sanskrit) reached far beyond a representation of pure business interests. The initiators of Drik wanted to act on an international scale against the unilateral and sensation-hungry image assigned to their home country, reducing it to flooded regions, ferry disasters, famines, and other catastrophes, by producing and distributing their own differentiated images. Quite rapidly, a considerable number of photographers principally from Asia, Africa, and Latin America joined the agency. Drik’s Website states that all members share the common vision of a majority world, not as "fodder for disaster reporting", but far more as "a vibrant source of human energy and a challenge to an exploitative global economic system".

In Bangladesh itself, Drik starts from the understanding that a population, which is 50 % analphabet, can best be reached through the power of images. It is part of Drik’s self-image that not only the circle of qualified image producers be continuously enlarged, but that the organization lastingly takes up action against social injustice and the plight of education.

In general, it is interesting to observe how Drik achieves to combine artistic and cultural activities with journalistic, political, educational, and other pursuits. The comprehensive profile of the website offers a fair insight into the resulting synergetic effects. The following aspects of the organization’s activities seemed to us to be worth particular mention:

Image production and distribution
The professional representation of members or associates of Drik enables these photographers to contribute images that correspond to their personal criteria to the national and international media and thus find large distribution.
The collection of the photo-archive, started in 1989, follows the same goal; it is planned that it will be accessible online via the "Majorityworld"[1] database .

Use of new media
As first public provider in Bangladesh, Drik is an Internet pioneer and email communication was rapidly introduced. Later on, the media was also used for educational projects and for independent online publications, such as banglarights.net [2], for instance, the first web portal in Bangladesh for human rights, and Meghbarta [3], the nation's first webzine.

Networking
Drik is part of a worldwide network committed to the use of photography, information technologies, and media activism for human rights, democracy, and social change and devoted to the creation of alternatives to the hegemony of global media giants.

Art and cultural program
Not only does Drik present national and international photographic exhibitions such as the yearly World Press Photo Exhibition (since 1993) in its own gallery, it also, for example, stages exhibitions on painting, works on paper, and caricatures as well as further cultural events. Starting with the year 2000, Drik launched "Chobi Mela" [4], the first major festival of photography in Asia.

Educational work
In 1998, Drik founded in Dhaka "Pathshala - The South Asian Institute of Photography" [5], a training centre for photojournalism. In addition, Drik organizes workshops and special educational projects for children and youths such as "Out of Focus" [6], a long-term collaboration with children from working class families, who learn to tell their own stories through photographs. 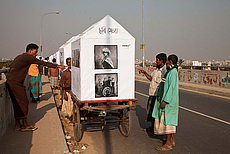 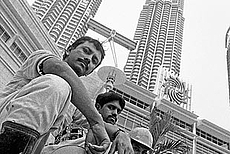 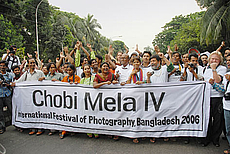 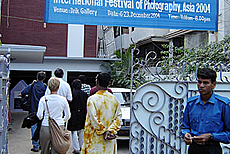