Around 20 of his "biospheres", presented for the first time together at Hamburger Bahnhof - Museum für Gegenwart, Berlin. 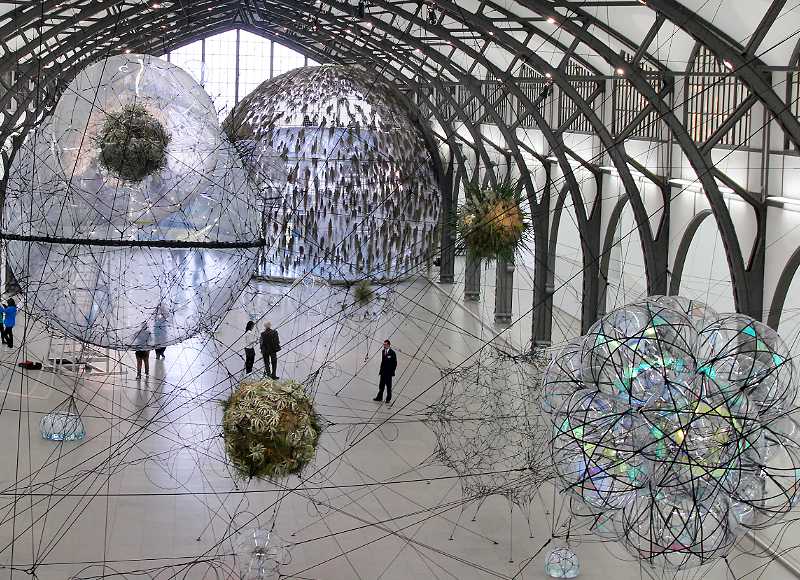 Spider webs, the consistency of soap bubbles, astrophysics, and legendary visionaries like Richard Buckminster Fuller (1895–1983) are some of the most important sources of inspiration to the artist Tomás Saraceno, who was born in 1973 in San Miguel de Tucumán, Argentina. He calls his balloon-like objects "biospheres," that is, "spaces containing life"; held by black rope nets and suspended in the air, some of them are accessible to viewers and some of them are inhabited by plants. The exhibition Tomás Saraceno. Cloud Cities at the Hamburger Bahnhof – Museum für Gegenwart, Berlin presents a large installation by the artist that occupies the entire space of the historical gallery.

Around twenty of Saraceno’s biosphere works are presented together for the first time, revealing a variety of forms of artistic expression throughout the artist’s previous work. Along with viewer-accessible environments such as Observatory, Air-Port-City (2008), visitors can experience sculptural modules including Biosphere 05 and Biosphere 06, which resemble flying gardens, as well as Large Iridescent Planet (2009), an object covered in iridescent foil. Saraceno’s works enthusiastically pursue the notion of an "realizable utopia." In this respect, the experimental approach of Air-Port-City, which the artist has continually developed over a period of several years, is exemplary. The concept is inspired by the eponymous Airport City in Frankfurt, where the artist lives and works. In this work, Tomás Saraceno proposes cell-like flying cities as possible architectonic living spaces in direct reference to Buckminster Fuller’s Cloud Nine (circa 1960). The fantastic architectural utopia Cloud Nine consists of a freely floating sphere measuring one mile in diameter that offers living space to several autonomous communities encompassing thousands of inhabitants each.

… The notion of the cloud is essential to the artist’s work. The cloud as metaphor stands for artistic intention, for the meaning of territory and border in today’s (urban) society, and for exploring possibilities for the sustainable development of the human living environment. In Saraceno’s work … this environment is not limited to the earth, but is explicitly conceived to reach into outer space. …

The artist’s works, which incorporate tendencies in science and architecture and, as works of art, explicitly implement natural principles in order to address immediate problems in our globalized world such as overpopulation, environmental pollution, and diminishing resources, are highly contemporary visions that embody current and potential discourses on the relationship between nature and society.

In his exhibition Cloud Cities at the Hamburger Bahnhof – Museum für Gegenwart, Berlin, Tomás Saraceno sketches the three-dimensional vision of a future world that visitors can enter to experience how, in a manner analogous to nature, a system of individual modules can create its own new galaxy.