Exhibition of his “Zeppelin Swarms” at the Zeppelin Museum Friedrichshafen, Germany. 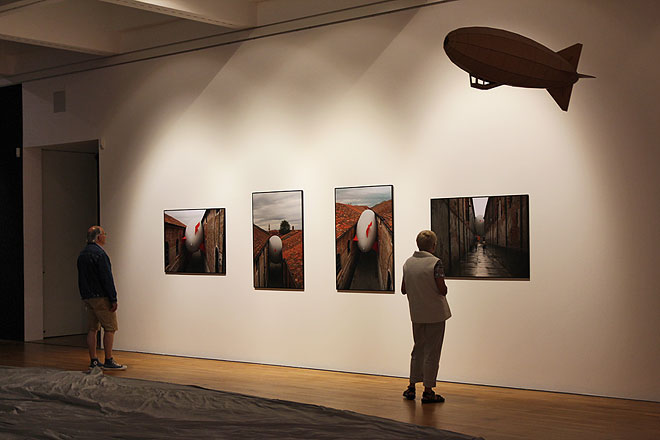 Following a swarm of small Zeppelins, visitors make their way from the technology department up into the art department and the Sciame di dirigibili / Zeppelin Swarms of the Mexican artist Héctor Zamora. With his work, created for the 53rd Venice Biennial and now adapted for the museum context, he is the first artist to exhibit in the large transit room between technology and art in the Zeppelin Museum. The visitors become witnesses to an event in the history of Venice that never happened in reality. To this purpose and with the aid of various artistic disciplines, Héctor Zamora tries to bring the Zeppelin invasion into the visitors’ heads. Postcards, drawings and paintings by Venetian street artists, advertisements in the press, and an animated video that spread via the Internet make the event seem as if it „really happened“. The only visible element in Venice’s cityscape remains a dirigible, stuck between two buildings like a relic of an invasion.

The installation in the museum suggests that Zamora’s Zeppelins have returned to Friedrichshafen from Venice to report on the lagoon city. The hull takes up the greater part of the exhibition space. But at the same time, the Zeppelins testify to the fascination their mythical standing still exerts today. The Zeppelin Swarms eliminate the seeming opposition between technology and art, restoring the unified vision of the world and its wonders that has been lost in modernity – by means of the Zeppelin as the marveled wonder of the modern world.

Héctor Zamora’s work thereby has a central function in the Zeppelin Museum in connecting the technological and art departments. For the Zeppelin Museum Friedrichshafen, located directly on the shore of Lake Constance, holds the world’s largest collection on the history and technology of airship travel and is the only major German museum devoted to the connection between technology and art.

A wealth of original items, models, and photos provide information on all aspects of the fascinating topic of dirigible travel, current today as it was 100 years ago. The heart of the exhibition is the partial reconstruction of the Zeppelin LZ 129 Hindenburg, true to the original and authentically furnished, which conveys the Zeppelin enthusiasm of the 1930s and gives the viewer a vibrant taste of a trip across the Atlantic. The art department spans a broad arc of five centuries, making it possible to encounter paintings, sculptures, and installations from the Middle Ages to the present: from views of the Lake Constance landscape to works by Otto Dix and contemporary artists like Res Ingold and Héctor Zamora.

The connection between technology and art in the Zeppelin Museum Friedrichshafen harks back to a time when museums were still „chambers of wonders“ that presented objects of diverse origin – art, crafts, nature – in a common collection context. They thus conveyed a unified view of the world in which art, history, nature, and science were not yet separated. This ended in the 19th century when the individual disciplines specialized and founded their own collection institutions. A few houses were able to rescue something of this original universal presentation aim, for example the Hessian State Museum in Darmstadt with its rich stocks of natural objects and artifacts and the Zeppelin Museum with its dedication to technology and art.

And intensive mediation is needed to awaken the visitor’s understanding of these two themes, seemingly so far apart. Otherwise he can’t understand what the works of art have to do with the Zeppelin collection and might even think that the exhibited works were part of Count Zeppelin’s collection. The starting point for this understanding is knowledge of the greatest technological feats of the beginning of the 20th century, which were not only technological, but also creative feats – as suggested by the fact that the term „technique“ (Gr. techné=art) always comprised technology and art, without separation.

What connects the two themes is the human being, who produces both technical and artistic artifacts. He must become visible in the collection’s narrative, behind both the great achievements of airship travel and of art. At the center, therefore, are those who provided the ideas, the engineers, technicians, and tradesmen who created the dirigibles, but also the crews who manned the ships and catered to the passengers. In art, too, the human being must move into the foreground. With the underlying idea Man and Technology, this makes art into a level of critical reflection about technology. In the thematic unit Man and Nature, images of nature can be experienced as a reaction to contemporary technological optimism and anxiety about technology. <emphasize>Man and Faith</emphasize> explores the entire spectrum between human hopes of salvation and utopian fantasies. In such a cultural-historical tour, art can illuminate aspects of the history of technology and other issues. Questions and thoughts already emerging as one walks through the Zeppelin collection find different, if not entirely new answers in the cultural-historical presentation.

The strict separation between technology and art previously maintained in the Zeppelin Museum prevented the visitor from exploring the mental connection between the two realms. That’s why in its new shape the museum must effect a substantive and in part even spatial overlapping. Art projects are already integrated in the exterior space, in the entrance area, and in the Zeppelin collection. But the works shouldn’t simply stand beside each other without substantive connection, as up till now; rather, the art should be employed to comment upon, support, and emotionally intensify the themes of the technology exhibition.

Decisive in this context is the design of the transition from the technology rooms to the art collection. For this is where the visitor who is still concentrated on the history of dirigible travel is attuned to the art exhibition and notes the substantive connections between the two areas. This can succeed only with themes that include both technology and art. Today, many artistic approaches are concerned with questions of natural science, even with airships or fantastic creations of flying – like Héctor Zamora’s.

The Museum’s focus in the art collection is on pioneering approaches, like those in Héctor Zamora’s art. The Zeppelin Museum is developing into a site where the discourse between the natural sciences and the humanities, between technology and art, is understood as a promising opportunity. And so it should help answer questions that have lost none of their urgency today. Considering the multifaceted problems in the world, utopias must be dared, without forgetting the risks that progress entails. The Zeppelin Museum sharpens its visitors’ senses for and knowledge of this.

Since 2008 director of Zeppelin Museum Friedrichshafen. She published intensively on contemporary art and organized conferences on biennials.