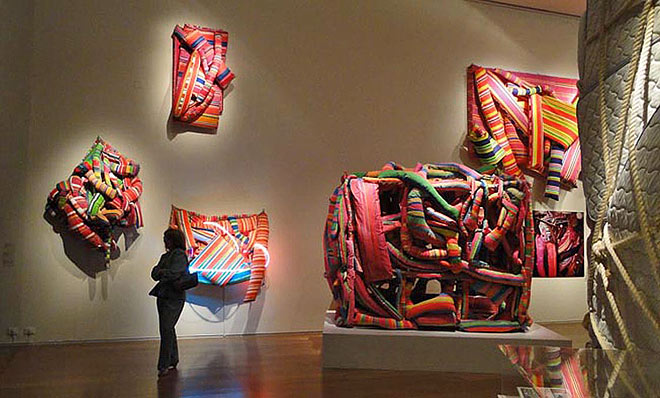 The Museum of Latin American Art Buenos Aires, MALBA, ends this year with a retrospective of the famous Argentine artist Marta Minujín, with more than 100 works, focused on her artistic production of the 1960s, 70s, and 80s.

Curated by Victoria Noorthoorn, the exhibition presents the artist in dialogue with her time, with the national and international events, and the artistic communities she was associated with, both in Argentina and in the world. The show explores the ways in which the always provocative production of Minujín responded, from the very beginning, to a decade of continuous transformations - the 1960s - which saw the birth and development of new realisms, pop, conceptual art, performance and happening, video and media art, psychedelic and action art, a decade that moved through periods of dictatorship and violence on a national level, as well as international situations as paradigmatic as the Vietnam War or the landing on the Moon. To all these circumstances Minujín found her own answers, again and again.

As Victoria Noorthoorn underlines in the exhibition publication: "Three variables enter into dialogue, Minujín's capacity to propose a constant redefinition of the categories of art, the possibility of imagining a fate for herself on a global scale, and her need to assert, at every step, a freedom of body and mind. Or, said differently, Marta is and isn't all that what we think she is: freedom, whirlwind, excess, egocentrism, celebration, pure creativity and madness, and at the same time - contrary to what we would imagine -, method, precision, rigor, resistance, generosity, a critical mind, as well as initiator and manager of artistic projects never seen before in Argentina. The retrospective intends to bring closer the critical thought of the work of Marta Minujín to a larger audience that knows little of the complex fabric of investigations, partly due to the extremely scarce exhibitions of the artist organized in Argentina."

Accompanying the exhibition, MALBA has edited an important English/Spanish publication (300 pages), with color reproductions of the presented artworks.