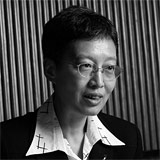 Ms. Sun Ge was conferred the PhD degree of Politics by the Law School of Tokyo Metropolitan University. Now she is Researcher (Professor) at the Institute of Literature, Chinese Academy of Social Sciences.

In the late 1990s, together with Mr. Mizoguchi Yuuzou, a famous Japanese Sinologist, she organized an extensive dialogue between Chinese and Japanese intellectuals entitled Chinese-Japanese Knowledge Community, which lasted six years, and triggered response and discussion in China, Japan and even Korea.

She is currently a member of the editorial committee of Inter-Asia Cultural Studies and Traces, two intercultural magazines. Publications include: Paradox of Takeuchi Yoshimi, Peking University Publishing House, 2005; Space Dotted with Subjects, Jiangxi Education Publishing House, 2002; and The Reasons for Us to Talk About East Asia, SDX Joint Publishing Company in 2011.