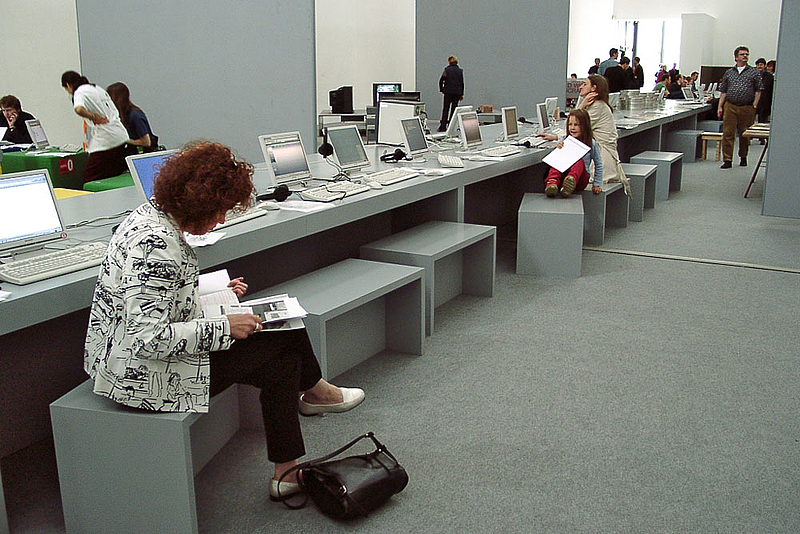 "Entry Permitted. Access Denied", declares a sticker on the streets and underpasses of Kassel. This sticker, along with many others (in four languages - Hindi, English, Turkish and German - bearing cryptic texts that suggest a tension between contemporary city spaces and how we inhabit them) leave a trace that points to the installation 28f28" N / 77f15" E :: 2001/02 by the Raqs Media Collective (New Delhi) at Documenta 11.

The installation is an assemblage of video, text, sound, print and signage - and works with documentary and found material to create a matrix of meanings around urban dispossession and the mark of the law in the city. It frames legal texts and official orders against the images of a city that regularly destroys its own spaces of habitation by depleting the fragile commons that exist in urban spaces. It connects the way the city is embedded in a world full of transmitting signs to the daily acts of labour that ensure survival. It maps the daily tussle between legality and illegality, between security and survival, between the masterplan and the moment. Visitors to the installation can take away with them a broadsheet that connects legal prohibitions, public inscriptions, private signs, and the search for questions and doubts about the ways in which we inhabit space.

Adjacent to the space of the installation, the Raqs collective exhibit OPUS a software and online space for a shared digital creativity. Visitors to Opus can view, share, download, transform and upload digital objects from and onto the virtual domain of Opus, thereby creating and re-generating a 'digital commons' that is as much about creating works, as it is about sharing the 'space' of each other's works. Opus is an attempt to translate the principles of co-habitation and sharing on to the fact of authorship, a software that is designed expressly to reconcile the imperative of authorship with the demands of a community of creation.

The relationship between the installation and the software is based on an understanding of space. While the installation articulates the consequences of what happens to cities when the spaces in them become cordoned off and gated, the software on the other hand expresses the possibilities of generating open protocols of sharing the 'space' of creativity in a virtual realm.