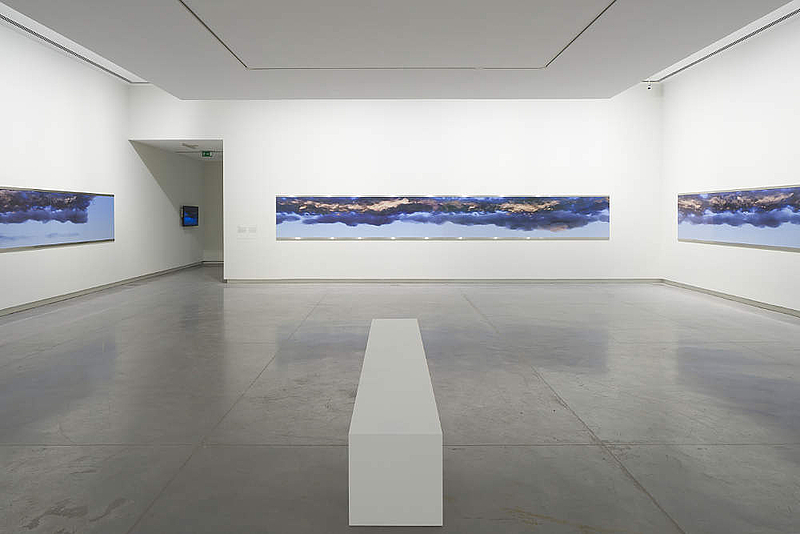 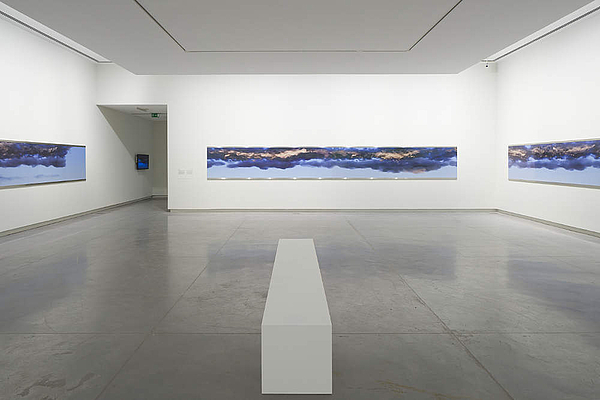 Placed on the four walls of Gallery 4 is a major new commission by Lawrence Abu Hamdan, titled Air Conditioning (2022). Linking the ocular and the auditory, Air Conditioning distills the artist’s concept of the ‘sonic image’ through a textured visual rendering of what he has dubbed, ‘atmospheric violence’.

The evolving graduated image maps the Israeli army’s sonic occupation of the Lebanese airspace over a 15-year period, from 2006 to the present. Following the 2006 July War between Israel and Lebanon, and the subsequent United Nation Security Council ‘resolution’ in August 2006, Israel commenced with a different form of warfare—an invisible, auditory conditioning of the Lebanese airspace, initially with F-35s, Unmanned Aerial Vehicles (UAVs) and drones.

Air Conditioning aggregates data from hundreds of individual documents dispersed across multiple locations in the United Nations’ digital library. which will be made publicly available online. This data is the basis from which these images were produced, using the animation software Houdini for Unreal Engine. In the image, every cm represents one day. For example, on 26 July 2020, there were a total of 51 violations; 6 fighter jets, 44 UAVs and a drone. On that day, each of those 44 UAVs were in the air for nine hours while the F-35s flew for more than four hours. The duration in the sky determines the thickness or depth of the plume in the image. Each type of aircraft is organised in terms of the altitude it occupies, with the F-35 at the top as it usually flies above 9000 m. The visual texture of the cloud assigned to each aircraft is illustrative of a specific sonic experience. In the lower half of the image, we see the small drones depicted by translucent clouds because they are barely heard, unless they malfunction or someone knocks one out of the sky. The F-35 is the loudest and the most intimidating sound to punctuate the day as it has an almost 500 km audible radius and its roar is the loudest of all jet engines, so its plume is sharper. Its dark colour is indicative of the F-35 being a more potent pollutant of the soundscape.

The visceral ‘aerial subjugation’ of Lebanon’s residents comes to life in Air Conditioning. While in Lebanon each of these violations is short-lived and no two residents could hear it in the same way or at the same time, Abu Hamdan presents these violations as an accumulated event, like the aftermath of a singular 15-year explosion.

The embodied violence of these flights emerges in painterly backdrops that reveal the density of aural pollution wrought by Israel on Lebanon in recent history. As one war ends between the two nations, another begins. This time, the traumatic after-effects remain withheld from the recognisable juridical, military and sensorial facets of everyday life, instead occupying a new-found sphere—one that Abu Hamdan claims can only be decoded through an examination of sight and sound.