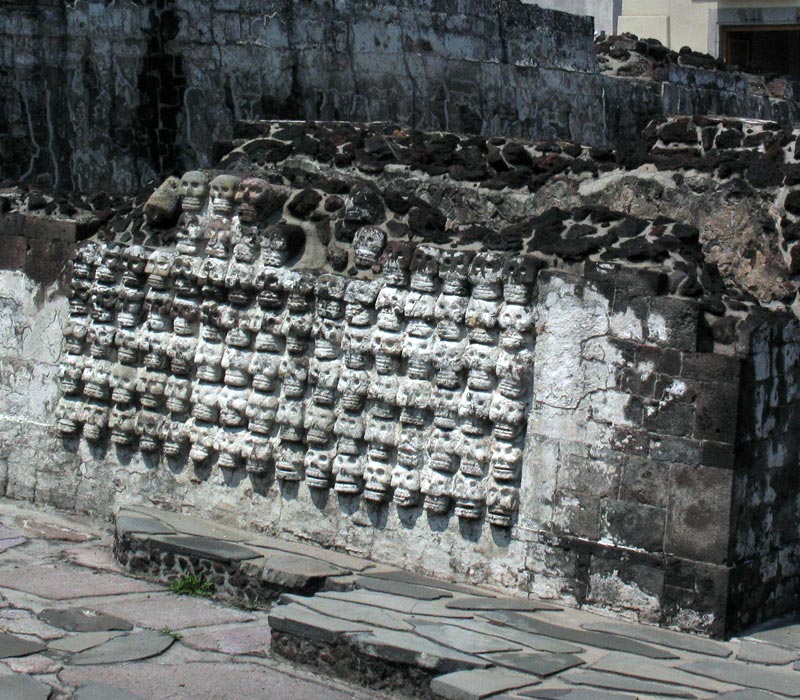 The Templo Mayor of the Aztecs in Mexico City

Sporadic excavations since the end of the 19th century / beginning of the 20th century, brought to light only some remnants of the Templo Mayor. But when in 1978 construction workers discovered the large stone relief with the representation of Coyolxauhqui, this caused a sensation. The finding was the impulse for the undertaking of a complete excavation of the ruins of the Templo Mayor, for what several buildings on the area needed to be demolished first.

The Aztecs, who called themselves Mexica, located their original provenance at a mythical, never found place Aztlan. From there, it is said that they started their long migration in the year "one flint stone" (1116 A.D.), which brought them to the Mexican high valley in the middle of the 13th century, where they had to struggle against the long-time residents. In the year 1325 they finally established their capital Tenochtitlan on an island of the Texcoco lake, according to the legend, on the place where they saw an eagle devouring a snake while perched on top of a cactus. This was the sign predicted by their god Huitzilopochtli.

Seven construction phases can be verified at the Templo Mayor, whereas each new one covered the old like a shell. The last one, of about 30 m height, consisted of a double pyramid, with two large staircases on the front leading to a huge platform. The stacked platform pyramid symbolizes two sacred mountains: the Northern (left) called Tonacatepetl, which for the Aztecs was the place where the gods stored the corn (associated with the rain god Tlaloc), and the right one, the Coatepec (mountain of the serpents) where the war god Huitzilopochtli fought against his sister Coyolxauhqui (see the explanation on the photo page), and four hundred brothers. On the double pyramid, each temple is dedicated to one of these gods. 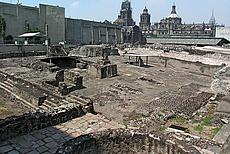 The area of the Main Temple 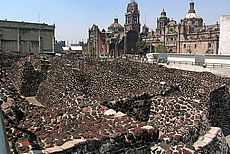 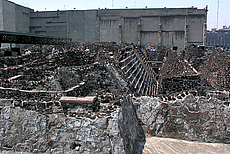 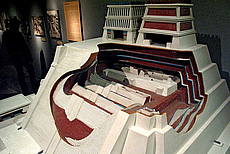 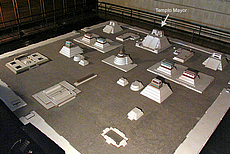 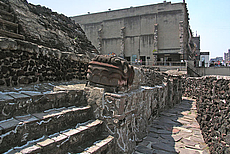 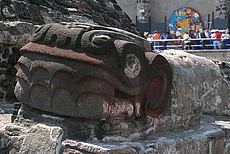 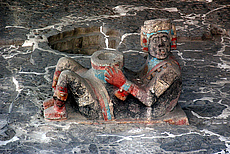 From information in the catalogue of the Aztec exhibition in Berlin 2003, and other sources.
© Copyright: All the texts, translations and photos are protected by copyright. Any further use requires explicit permission.