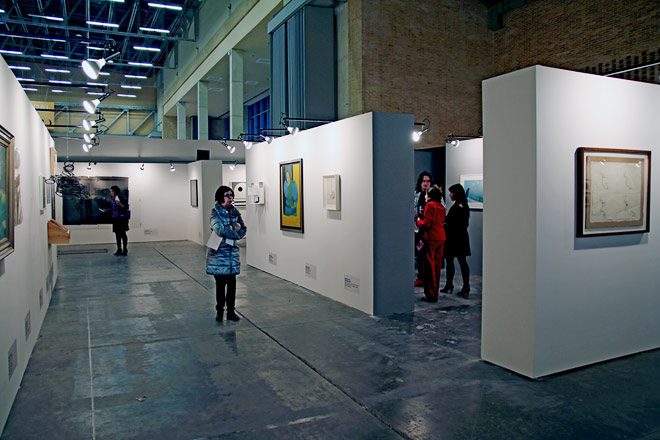 Referentes is a new exhibition space devoted to works of art generally from the period 1950-1980 selected from the collection of the 25 galleries that exhibited at ARTBO. These works serve as historical references to understand today’s art and allow a wide interpretation of the past.

Given the multiple possibilities of addressing a very diverse artistic production over such a long period of time, the work selection has been structured establishing interconnected sensitive areas where historical times and different aesthetic attitudes converge, without restricting them to accepted historical categories. Rather, the international art arena is considered as a sum of symptoms and attitudes, whether they are independent, coincident, opposing and/or superimposed.

The works in this section emphasize the relationship of photography and video with the conceptual trends. Used to face conventions and biases for the sake of clarity of communication between artists and their public, photography and video have served, among other things, to record bodily processes and symbolic actions through performances staged for the camera in which art and life are brought together, as it can be seen in the works of Elías Adasme, Nacho Criado, Gastão de Maghalaes, Leticia Parente, Regina Vater, and Liliana Porter.

The abstract and geometric trends that marked the ‘50s and ‘60s as a manifestation of intellectual refinement, with artistic values such as visual order and harmony, led to formal questions and experiments that are still being developed today. These tendencies are represented here in the works of artists as geographically and generationally diverse as Antonio Asís, Martha Boto, Feliza Bursztyn, John Castles, Carlos Cruz-Díez, Ana Mercedes Hoyos, Julio Le Parc, Eduardo Ramírez Villamizar, Jorge Riveros, and Jesús Rafael Soto.

The questioning of the language of conceptual art becomes more apparent in the calligraphic fictions and asemic writing of several artists, of which Irma Blank, Mirtha Dermisache, León Ferrari, Bernardo Salcedo, Goran Trbuljak, and Horacio Zabala are included here.

Experimental film, which was a vehicle to impart movement to sculpture, painting, drawing and photography, and was used by surrealism to reveal the science of our dreams, is another path followed in Referentes. The short films of Luis Ernesto Arocha are made from and in collaboration with Colombian artists Norman Mejía, Feliza Bursztyn, Enrique Grau, and Bernardo Salcedo.
.
Appropriations and Variations

Both in the carefully worked line of Carlos Rojas’ and Andy Warhol’s drawings and in Beatriz González’s art history based paintings, the spirit of modern art engages in a dialog with tradition, even when attempting to deny it.

The possibilities open to photography in modern times, thanks to its incredible power as a visual reality capturing device, enabled a dialog with different trends and languages. Thus, in artists as diverse as León Ferrari, Reynaldo Luza, and Leo Matiz, direct black and white photography is used to create images with a predominance of geometric values and constructive patterns, typical of non-figurative painting.

Informative photo tour through all the sections of the 10th International Art Fair of Bogotá, 24 - 27 October 2014.