Playing with a Loaded Gun 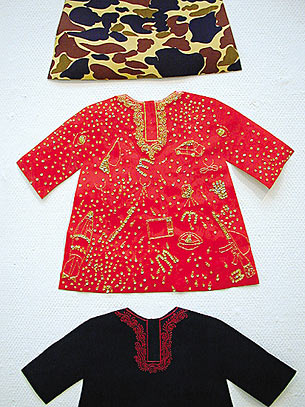 Take for example Saira Wasim’s series of miniature paintings Honor Killings. The artist examines the practice of murdering a daughter, sister, or wife who is perceived to be promiscuous in order to preserve the family’s honor. Her paintings charm the viewer even as they allegorize slain victims who are represented as delicate and beautiful flowers. In her art, Wasim draws attention to a subject that she believes many people in the country ignore. In fact all of the artists in Playing with a Loaded Gun use their artwork for political means, yet they do so in nuanced ways. By creating works that pose more questions than provide answers, the artists present current Pakistani issues in a manner that engages viewers in a dialogue, rather than submitting them to a soapbox speech.

Like Wasim, Adeela Suleman also highlights a hazard women experience in Pakistan, but her approach is quite different. She creates an installation about the dangers women face riding motorcycles. For the sake of modesty, women risk riding sidesaddle behind men, even though the smallest bump can jar them from their precarious position. Suleman displays practical accessories, such as helmets in a rainbow of colors and a variety of styles; these items make it possible to ride safely while, most importantly, maintaining a fashionable hairdo.

Masooma Syed also comments on the strict conventions of female beauty and propriety. In her minimalist sculptures, Syed collects and manipulates the remains left in a comb or brush and nail clippings. In Pakistan, a woman without long hair and well-groomed nails is said to be without beauty. Syed restores radiance by transforming abject materials into elegant objects.

By merging seemingly divergent sentiments - grim and pleasing - artists in Pakistan push the envelope on propriety by publicizing private, ugly truths in unexpected ways. Reeta Saeed opens the door to examining domestic violence in contemporary Pakistan, yet she does so with a delicate palette. Drawing mainly with graphite on a white or beige surface, Saeed lifts imagery from older miniatures and transplants these pictorial elements onto items found in the marketplace such as shirts, bags, and fabric. She uses graceful images from the past that depict the age-old theme of the lovelorn in order to look at the terrible subject of abuse today.

Finding some humor in tragic situations is essential for life in Pakistan, where even the founding of the nation combined the joyous celebration of independence from British rule with the violent events that ensued when it partitioned from India. As they celebrate Pakistan’s fifty-sixth anniversary, people continue to face the tragic consequences of the nation’s beginnings. For example, the nuclearization of both Pakistan and India and the struggle over Kashmir still threaten life in both countries today. Humorously and problematically, Imran Qureshi comments on these political tensions. The artist robes and displays nuclear weapons as Mughal emperors, the powerful Islamic rulers of South Asia from the 16th to the 19th Century. In his miniatures made from recycled book pages, bombs receive the full regalia and respect typically bestowed on a king. The nuclear bomb is shown as the most important ruler and protector of the nation; yet this king has the potential to destroy the country as well.

Similarly Ambreen Butt alludes to current conflicts in her pristine paintings. Although Butt is now living in the United States, she mirrors the imagery of the artists working in her native country. She draws on the miniature painting tradition, which has a complicated history in Pakistan where it relates to the nation’s Islamic heritage because of its extensive use in Mughal court workshops. A simurgh, a legendary bird depicted in older miniatures, finds its way into her contemporary images defecating bombs. In mythology, the simurgh is defined at times as a protector, while it is also described as a destroyer. Perhaps this dual interpretation can also be applied to bombs.

Like Butt, Alia Hasan-Khan lives in the United States and also comments on the potential devastation of bombs in unexpected ways. For this exhibition she created dessert boxes that poke fun at the humanitarian food packages that the U.S. military dropped in Afghanistan in October 2001. In her version, Hasan-Khan included a ludo, a sweet Pakistani cake, prepared with wires and instructions for how to eat it. The artist comments on the ongoing miscommunication and misunderstanding between countries and cultures and reflects on the American campaign that probably caused more damage than good. The food packages were the same color as yellow cluster bombs also being dropped by the United States during its war against the Taliban. As a result, when starving civilians saw yellow objects falling from the sky, they believed that they represented the rations that would save their lives. Instead they faced injury and death upon retrieving them. While fought in the neighboring country, this war had a great effect on life in Pakistan.

Many artists realize the significance of looking beyond Pakistan’s borders to better understand the nation. Among other topics, they explore the influences of the West on Pakistan. Rashid Rana considers the function of Western television, newspapers, and magazines during wartime. In This Picture Is Not at Rest he manipulates mass-produced posters that Pakistanis use to decorate their homes cheaply. These represent tranquil scenes in European urban areas. He disrupts the peace by inserting images of military actions taken from different news media, pictures of dead victims of war, and also corporate logos of multinational companies that reap the benefits of battle when they swoop in to rebuild devastated nations. Both the idyllic posters and the disturbing images are imported from the West, even as the battles are waged in the East.

Although they face external pressures along with internal instabilities, Pakistan’s citizens enjoy the pleasures of life including everyday rituals of eating culinary delights and the more significant festivities such as the birth of a child. After becoming a mother, Risham Syed began to include references to babies in her work and in Evolution Threads she incorporates three baby-sized kurtas, traditional shirts worn in Pakistan. Fully aware of the dangers of growing up in this region, she has made the shirts not out of the typical white fabric; instead she uses army camouflage and Rexene, a plastic-like material used on parts of rickshaws and bus seats. On them she embroiders missiles. Stitching and embroidering, brought to South Asia by the colonizers, reflects the Victorian English values instilled into the upper class of Pakistan today.

Hasnat Mehmood goes further back in history and refers to the legacy of the Mughal Empire in Pakistan. He appropriates the Mughal miniature painting tradition in works that he creates in the same manner he would approach writing a letter. His is a stream-of-consciousness technique in which he jumps from one subject to the next - from personal stories to the horrors of war. In the end he includes a postage stamp that he designs as a profile bust of a turbaned man sometimes colored black, other times painted in a camouflage print. The stamp, used in countless mailed items, is an ideal way to convey messages to a large and vast public.

What do these artists want to tell, and to which public? Together, the works in Playing with a Loaded Gun offer a critique of Pakistani politics and society. Even though the audience in New York may not appreciate what certain images mean for people in Pakistan, recurrent symbols such as guns and bombs will convey the impression of violence. But then the dazzling beauty of some of the works and the playful techniques of others will serve to complicate a one-sided reading of Pakistani society. In the end viewers from anywhere will be left with a multidimensional appreciation of life today in Pakistan.