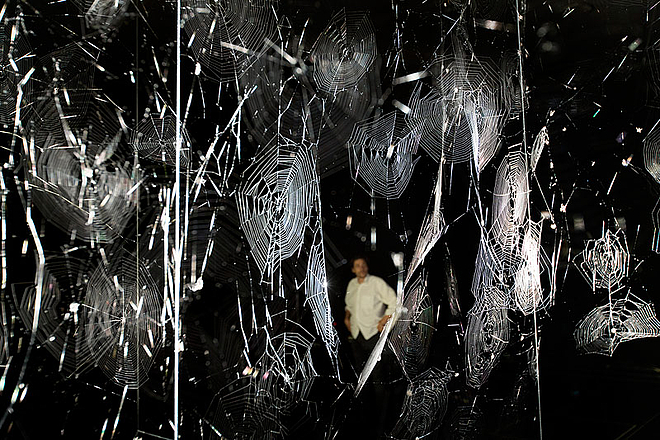 The Museo de Arte Moderno de Buenos Aires presents the first exhibition at an Argentine museum by Tomás Saraceno. Curated by Victoria Noorthoorn and her team, How to Entangle the Universe in a Spider Web spans two galleries of the museum with two immersive installations as the result of a decade’s worth of interdisciplinary artistic research. In both artworks, the visitor experiences the universe as represented by a network of interconnections in which each element expands and transforms the others, reconfiguring their material and social boundaries.

Combining Saraceno’s interest in arachnology and astrophysics with sound and the visual arts, the project introduces museum visitors to a collective ‘cosmic concert’ that envelops the two spaces. When visitors enter each of the installations, they will initially only be able to perceive faint details. Suspended filaments of webs and swirling formations of dust foreground a floating journey through the ‘cosmic web’ where endless connections that would otherwise be overlooked are made tangible. 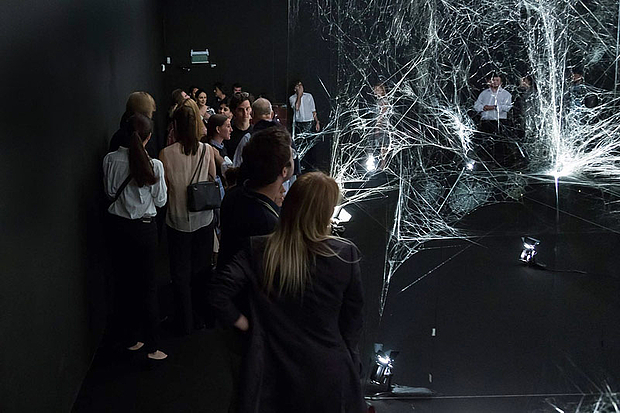 In the installation The Cosmic Dust Spider Web Orchestra visitors find themselves part of a rhythmic ensemble. A light beam makes cosmic dust visible in a dimly lit room. Through a live three-dimensional video recording, the floating dust particles are tracked and sonified. Their sound, determined by their position and the speed at which they travel through space, is amplified and spatialized over a set of over 25 loudspeakers. Reminiscent of Aerocene — a concept with which the artist has speculated on possible cloud cities for more than a decade — the particles move through space and time: “A shimmering section of the Milky Way... everything begins with a cloud of dust... in cosmocoustic resonance,” notes Saraceno.

As visitors wander through the gallery, their own movements become audible through the dust they displace. Every particle resonates at a different tone: when they collide, each tone is multiplied. The interplay between the sound of the dust floating in the gallery, the visitors wandering, the rhythm of a living spider (Nephila clavipes) plucking its web, the air moved by the speakers, contribute to a low frequency collective composition —a jam session for a more-than-human world. Like an autonomous entity that is constantly in dialogue with humans and their breathing and movements, the dust particles lend voice to the museum space, deposit on the threads of collective webs and invite visitors to trace their paths through the air. As though waiting for a shooting star, visitors partake of a loop of light and sound that reveals the hidden sonorousness of the cosmos. Between five and three hundred tons of cosmic dust falls to Earth from the atmosphere every day. Sometimes as old as the known Universe, these particles are past and present, cosmic and earthly. Sonic filaments vibrate as an interplanetary composition, resonating with the formation of nebulous, unidentifiable cosmic bodies millions of light years away. 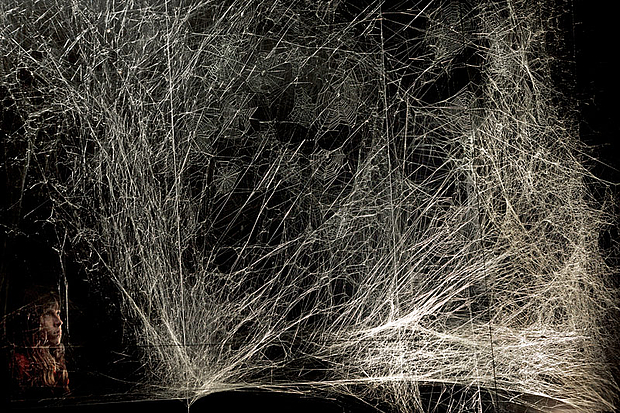 On the second floor of the Moderno, the installation Quasi-Social Musical Instrument IC 342 built by 7000 Parawixia bistriata spiders over a period of six months, features the largest three-dimensional spider web ever exhibited. Here, as visitors wander through shiny filaments, galactic clouds and clusters appear as extended ripples of a micro- and macrocosmos of cooperation. Interconnected threads woven by thousands of quasi-social spiders from the Argentinian Parawixia bistriata species surround the visitor. These drawings in the air, made by an estimated 40 million threads, reveal the trajectory of cosmic dust particles. Whilst traversing these multiverses, visitors are invited to attune to the rhythms of the cosmos and the slow cadence of the arachnids. These spiders wove a remarkable texture that challenges visitors’ perceptions of the very nature of ‘being’ and ‘becoming’ in the cosmos.

As though acting on the instructions of Julio Cortázar, Saraceno cites William Eberhard: “To start, you must first blindfold yourself: the spider’s eyesight is very poor, her eyes are on the wrong side of her body to see the web’s lines as she hangs below them, and in any case she often works at night. (...) The air is highly viscous at the scale of the spider; for a human, an analogous situation would be building a web of elastic ropes under water. You must instead depend on the vagaries of the wind; you will have to launch new lines, allowing their tips to float away on irregular air currents.” 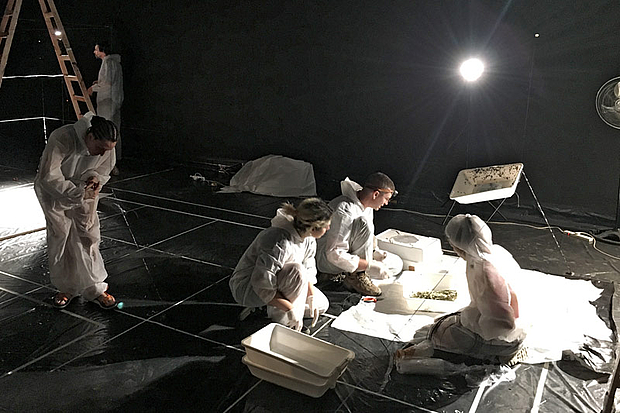 For the past six months, Moderno has housed specimens of the species Parawixia bistriata and witnessed how spiders inhabit a space. This species, hailing from Copo National Park located in the northeast of Santiago de Estero and from the Buenos Aires Province, generally weaves longer threads than other species – up to 15 metres long – and is one of the twenty-five species that demonstrate social, cooperative behaviour among the over 43.000 known species of arachnids across the world.

The team at Moderno has adapted to and learned from the temporalities of the Parawixia: from the way it weaves to the way it groups and expands; the spiders wove exceptional long silk sails, bridging from, and anchoring onto the architecture of the gallery. Spiders are known to patiently await a breath of air to propel them across the empty skies. Ballooning, a method by which spiders use the air as a means of dispersal, has long inspired the artist who is fascinated by the collective interweaving of thousands of threads that allow the spiders to propel upwards. This communal structure, silhouetted in the exhibition space, presents us with phenomena that far exceed the human scale: the 140 million years old presence of arachnids on the Earth. Immersed in an infinitely complex and interconnected web, visitors become a part of the social construction of the arachnids, the artist, the curator, the professionals from different museums, the scientists and the thinkers from different disciplines who have worked on this project. 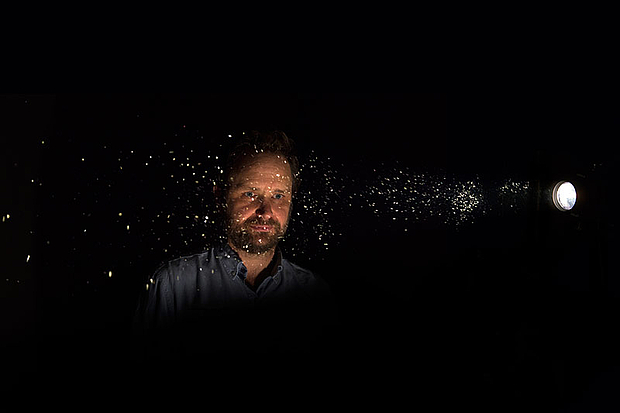 Alluding to the spiders’ silk, the movement of the cosmic dust draws trails in the air, which are set before the dark infinitude of the known universe, perhaps one of infinitely many. This evokes the artist’s vision of Cloud Cities, a floating urban vision, a new way of moving and living on Earth. Aerocene, Saraceno’s open source project manifests as a series of air-fuelled sculptures that end our dependence on fossil fuels by embarking on aero-solar journeys around the planet. The Aerocene sculptures make use of the thermodynamic energy of the Sun and the Earth to float freely by way of jet streams in the upper stratosphere. Like Aerocene, the exhibition How To Entangle the Universe in a Spider Web makes the air tangible and invites visitors to wander through a vast sonic expanse, encouraging different ways of moving, like the way spiders do when they cast a line of silk against a skyscape of clouds.

This exhibition by Tomás Saraceno is the result of a long-term research project into spider webs, expressing the artist’s idea of the universe as an extensive realm of interconnections. It also reconsiders the affinities that exist beyond the human realm, like flows on the atmospheric wind and journeys through the ‘cosmic web’, an analogy commonly used by astrophysicists to describe the universe as a set of discrete galaxies joined together by gravity. Multiple forms are created as a sequence of trails, traces and constellations that reveal the microscopic, the global and the cosmic.

Over the last decade, Saraceno and his team have pioneered the study of spider webs for which they have developed innovative methods that have expanded the horizons of scientific research, for example by developing a laser system that can digitally reconstruct complex three-dimensional webs. Several research institutes such as the Massachusetts Institute of Technology and the Department of Collective Behaviour at the Max Planck Institute have worked with the artist to further their research and development, making real contributions to both the sciences and the arts and establishing a unique exchange between the two. The Studio Tomás Saraceno in Berlin houses the largest collection of three-dimensional spider webs in the world and Saraceno is regularly sought by to collaborate with different universities and institutes on the preservation, digitalization and research into the properties of spider webs.

The exhibition will be accompanied by a comprehensive catalogue featuring images of the exhibition and the artwork creation process as well as a selection of essays by prestigious authors: a text by Caroline Jones, an art historian at MIT; a document that provides an astrophysical perspective on the artist’s work; an essay by Carlos Gamerro that explores the relationship between spider webs, labyrinths and metaphor, and a fictional short story by Pola Oloixarac about spiders and their webs. In addition, the publication will include a choral text that provides an account of the conversations of the team at Studio Tomás Saraceno and a set of short polyphonic texts by different authors – including writers, art historians, arachnologists, physicists and architects – that will invite the visitor on a journey through the different universes at Moderno.

The exhibition is jointly organized by the Museo de Arte Moderno de Buenos Aires and Studio Tomás Saraceno, with the collaboration of the Museo Nacional de Ciencias Naturales Bernardino Rivadavia. It was made possible by the support of the Council of Cultural Promotion of the City of Buenos Aires.