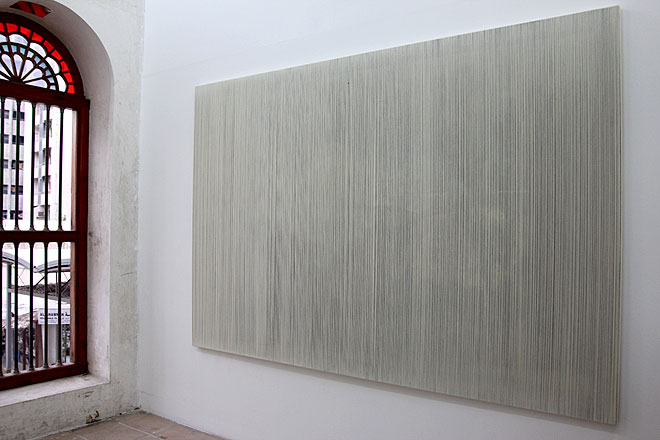 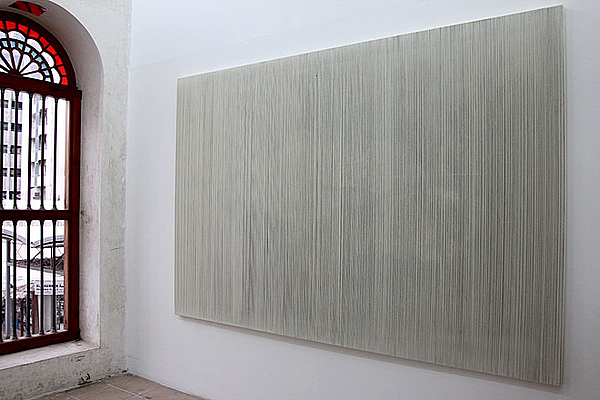 Wolle, gefundenes Gemälde
168,9 x 246,4 x 5,1 cm
Courtesy Künstlerin und Galleria Franco Noero, Turin
Beginning in 1998, Favaretto has procured one piece of baggage each year from venues like flea markets and auctions of unclaimed luggage, where she can obtain anonymous suitcases containing personal effects from their one-time owners. She then locks each bag, ensuring that its contents remain both inaccessible and unknown.

More recently, Favaretto has also been collecting paintings from thrift stores, estate sales, and other places where they have been discarded by their owners. She then completely entombs each of these anonymous paintings in a single thread of wool yarn, adopting the Pantone color code of the material as the title of the resulting work. The visibility of the scene concealed beneath the yarn depends upon a variety of factors, including the level of contrast in the painting and the color and gauge of the wool Favaretto chooses. Recuperating these abandoned pictures only to obscure them, the artist subjects them to a further kind of partial disappearance, turning them into monuments to their own invisibility.