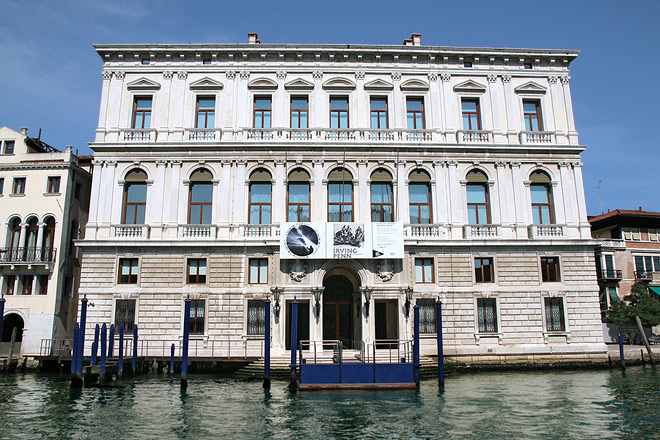 Palazzo Grassi presents major temporary exhibitions, some of which are based in whole or in part on the art collection of François Pinault.

This last palazzo built on the Grand Canal before the collapse of the Republic of Venice in 1797, was commissioned by the Grassi family, originally from Chioggia. The design is attributed to Giorgio Massari (1687-1766). It is believed that the work began in 1740 or 1748, possibly being completed by 1758 or, more probably, in 1772.

The loss of the Grassi family fortune forced them to sell the palazzo in 1840. The different changes of ownership in the following decades resulted in a number of modifications in the building’s layout.

In 1983 Palazzo Grassi was bought by the Fiat group, which commissioned the Milanese architect Gae Aulenti to refurbish it as an exhibition space. From 1983 to 2005 Palazzo Grassi, administered by a FIAT management team personally selected by Gianni Agnelli, was internationally renowned for its art exhibitions. Under the aegis of a series of exceptional directors (Pontus Hulten, Paolo Viti and others), Palazzo Grassi presented ambitious and well-attended shows, notably those devoted to great civilizations of the past (for example, the Etruscans, the Mayans, and the Celts).

Following the death of Gianni Agnelli, FIAT chose to terminate its involvement. In May 2005 François Pinault decided to take over Palazzo Grassi, and he commissioned architect Tadao Ando to carry out the remodeling of the building.

In April 2006, Palazzo Grassi reopened to the public with the exhibition "Where Are We Going? A Selection of Works from the François Pinault Collection", curated by Alison M. Gingeras.

(From information on the official website and other sources.)