Director General of the Yokohama Triennale 2011 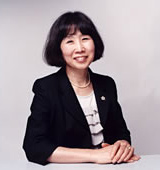 OSAKA Eriko - biographical data:
Director General, Yokohama Triennale 2011 / Director, Yokohama Museum of Art OSAKA has organized and curated many international exhibitions of contemporary art while at the Japan Foundation and ICA, Nagoya. She was senior curator (1994-1997) and artistic director (1997-2006) at the Contemporary Art Center, Art Tower Mito, artistic director at Mori Art Museum (2007-2009) before assuming her current position as director of Yokohama Art Museum of Art. She received BFA in Aesthetics/Art History from Department of Philosophy, Faculty of Letters, Gakushuin University.

© Greeting by OSAKA Eriko, Director General of the Yokohama Triennale 2011
Press information, 26 May 2011

Title:
Our Magic Hour: How Much of the World Can We Know?