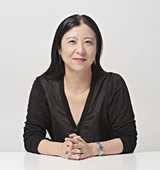 MIKI Akiko - biographical data:
MIKI has worked as independent curator, co-director of Dentsu Art Project, before working as chief curator at Palais de Tokyo in 2000. She has a wide experience of curating exhibitions in an international context, including 1998 Taipei Biennial and shows at the Barbican Art Gallery in London and National Museum of Contemporary Art, Korea. She has received BA in Art History, University of Washington, Seattle, USA, then completed MA in Art History, Université de Paris IV, Sorbonne, France.

Title:
Our Magic Hour: How Much of the World Can We Know?