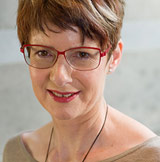 Principal Curator and Head of Programmes at Auckland Art Gallery Toi o Tāmaki, New Zealand, where she leads exhibitions, publishing, visitor engagement, learning, outreach, volunteer guides and a public research library. She is a curator, researcher and writer with interests in public and social engagement, among other areas of contemporary art.

Stanhope is an Adjunct Professor in the School of Art and Design at AUT University, Auckland and holds a PhD from the School of Arts and Social Sciences at the Australian National University, Canberra. Her institutional roles have included Deputy Director and Senior Curator at Heide Museum of Modern Art, Melbourne (2002–08); inaugural Director of the Adam Art Gallery, Victoria University of Wellington, (1999–2002) and Assistant Director, Monash University Gallery, Melbourne (1993–99). She is also an advisor for Port Journeys, an international artist exchange network based in Yokohama, Japan. Stanhope is on the boards of Headland Sculpture on the Gulf, Auckland, Art Monthly and St PAUL St Gallery, AUT University.