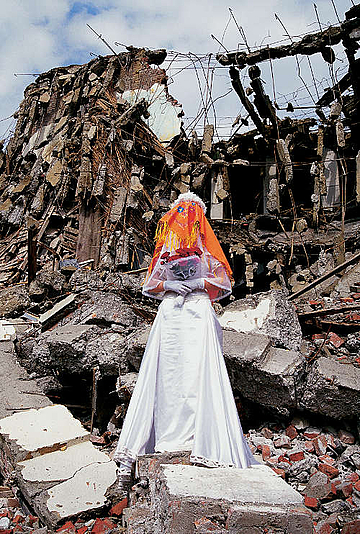 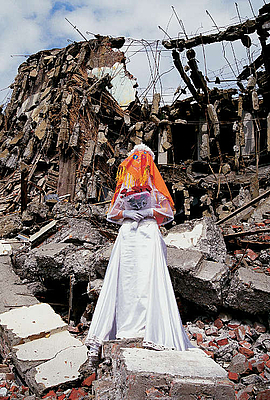 Erzen Shkololli - one of the youngest and most interesting artists still active in Kosova - works with the local rituals and folklore. His pieces are built with wool and fabrics taken from national costumes and flags and then reassembled in patchworks and installations, Shkololli acts as a sort of instinctive and biased anthropologist: he re-enacts traditional ceremonies, while insinuating contemporary symbols and disillusions. It's this indecision between pas and present that makes Shkololli's work a typical example of what it means to work in the Balkans today: we suffer from a tragic form of ideological strabismus, and we are lost between tradition and modernity, remembrance and hope, freedom and death. (...)

On his ... project, "The Bride", he behaves toward bridal subject matter. The traditional white wedding gown and the veil covering the bride's face, as with the diadem over the veil. The "crowning" of the mysterious bride with Kosova's postwar reality, originates an effect of surreal and strangeness. Being alone, coming into view as a heavenly apparition at the crime spots, but also in other surroundings, this bride sends out two messages. One is on purity (innocence), and the other is about the improbability of communicating between the past and the future, since "the chosen one" is missing along with her "destiny".

From the catalogue text to the exhibition "Beautiful Strangers", Albanian Art, ifa-Gallery Berlin, 2001.

Denkzeichen 4. November 1989
on Alexanderplatz in Berlin

The memorial art project, run by Pat Binder and Gerhard Haupt from 1999 to 2003, commemorated the largest rally of the democracy movement in the GDR (German Democratic Republic - Eastern Germany). In an illuminated billboard on Alexanderplatz in Berlin, the project presented works by artists from different countries who deal with the individual and collective effort to establish and protect democratic conditions, as well as with the conflicts of the individual between adaptation and resistance, resignation and civil courage.

Website of the Projects ►
static pages, not optimized for mobiles