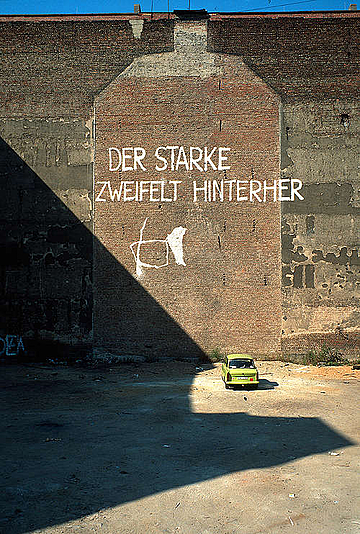 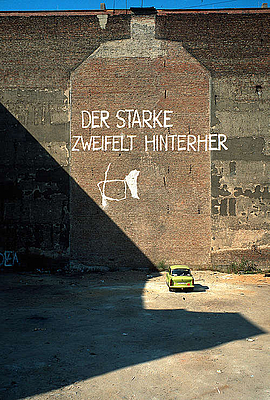 Der Starke zweifelt hinterher
[The strong doubts after]
UV silk screen print, 118 cm x 175 cm
The photograph by Ludwig Rauch on which the silkscreen is based documents a joint action in Berlin/Prenzlauer Berg on August 8, 1991.

Produced for the Commemorative sign 4th November 1989, a lightbox gallery by Pat Binder and Gerhard Haupt on Berlin's Alexanderplatz, modeled on the Foto/Graphik Galerie Käthe Kollwitz, in which several works from the Alexanderplatz project were "guests" from November 7, 2001 to February 6, 2002.

The action about the doubt took place on August 8th, 1991 in Berlin-Prenzlauer Berg. Preceding it were several talks about the first cover of a newly founded magazine. In the years following 1990, an extraordinary amount of magazines were started. Almost all of them have stopped their presses. One could see that coming.

The painter Michael Diller (1950 - 1993) wrote the sentence on the firewall of the courtyard in which the editorial offices were located. An amusing portent, no more. Ludwig Rauch photographed it, the image appeared in October on the cover of the magazine in question. Soon after, the firewall was plastered and painted a friendly grey. The empty site which opened the courtyard to Marienburger Strasse has not been filled. It has been fenced off. Beyond, nature exhibits inner city capriciousness, allowing grass and herbs to flower. Today the question of doubt requires another answer.

Denkzeichen 4. November 1989
on Alexanderplatz in Berlin

The memorial art project, run by Pat Binder and Gerhard Haupt from 1999 to 2003, commemorated the largest rally of the democracy movement in the GDR (German Democratic Republic - Eastern Germany). In an illuminated billboard on Alexanderplatz in Berlin, the project presented works by artists from different countries who deal with the individual and collective effort to establish and protect democratic conditions, as well as with the conflicts of the individual between adaptation and resistance, resignation and civil courage.

Website of the Projects ►
static pages, not optimized for mobiles