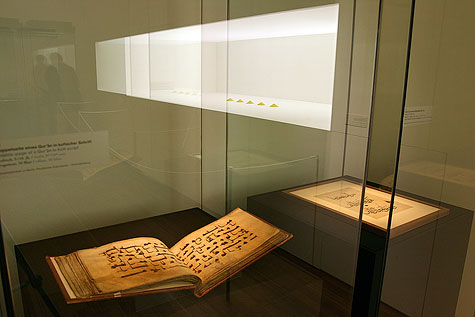 Extract from the press release:

Taswir - Pictorial Mappings of Islam and Modernity is an exhibition organized by the Berliner Festspiele at the Martin-Gropius-Bau that takes a contemporary look at Islamic forms of visual expression. The exhibition focuses on three major themes: Calligraphy, Ornament and Miniatures. It places specimens of classical Islamic art in the context of modern and contemporary practice in the fields of graphics, drawing, painting, photography, video art, installation, sound and sculpture. The exhibition examines the visual and performative aspects of writing as an art form in its own right, addressing the structural and political aspects of ornamentation and presenting figurative forms of Persian and Mogul miniature painting from a narrative and poetic perspective.

In 18 thematically distinct rooms the exhibition creates a kaleidoscope of visual and acoustic references, different forms of artistic expression, and historical allusions. This juxtaposition was inspired by Aby Warburg’s Mnemosyne Atlas. Thus Persian, Arabic and Ottoman pictorial traditions, for example, are viewed in the light of contemporary artistic activities.

The exhibition invites visitors to look at the artificial distinctions between "Orient" and "Occident" with a fresh eye, while subjecting the roots of the traditional European view of the "West" to critical scrutiny.

Important national and international libraries and museums - such as the Hermitage in Saint Petersburg, the British Museum and British Library in London, the Bibliothèque nationale de France, or the Calouste Gulbenkian Museum in Lisbon and the Museum of Islamic Art (in the Pergamon Museum) - have made precious objects of Islamic art available as loans.

Over thirty artists from the international art scene take part in the exhibition by showing important works, some of them for the first time in Germany.