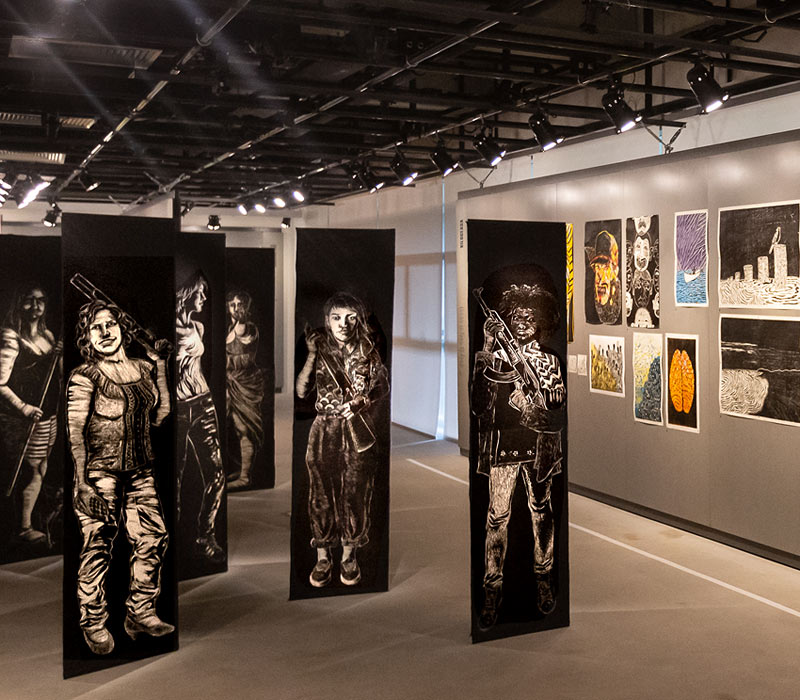 The curatorship’s conceptual and historical approach considers a relevant moment in the local context: the emergence and organization of independent studios and workshops, apart from any institution, where printmaking production is conceived, shared and discussed in a more spontaneous way, often on the fringe of the art spaces and taking part in the public sphere. It is a social and artistic phenomenon that has taken shape over the last decades. With a certain public character, this production in woodcut has retained the value of artisanal work and resistance in times of the unbridled spread of digital devices, even while also making use of technological apparatuses itself. Far from the purism of printmaking in the first years of the 20th century, this production is anchored in the recent urban reality, stimulating “a diachronic and synchronic coexistence between the processes for constructing images through the use of a matrix.” The exhibition also includes educational activities, integrated with the show’s context and conceived together with the participating artists during the course of its production. There are guided visits, lectures, workshops and courses scheduled for these first months of Sesc Guarulhos’s operations. Designed by the Dal Pian Arquitetos Associados architectural firm, the 34.2-thousand-square-meter constructed space of this cultural sports and leisure center includes ample settings for the public to make contact with art and engage in dialogue about it, including in areas outside of its exhibition spaces strictly speaking. These new facilities will also provide the general public with access to the artworks in Sesc São Paulo’s permanent collection. In its spaces and public leisure areas, visitors to this new Sesc can see works by renowned Brazilian artists such as Adriana Varejão, Anna Bella Geiger, Carlito Carvalhosa, Claudia Andujar, Eduardo Frota, Janaina Tschäpe, Leonilson, Sérvulo Esmeraldo, Sidney Amaral, and others. In this sense, the Greater São Paulo metropolitan region has gained a new place dedicated to the visual arts, promoting and disseminating Brazilian art to both local and foreign audiences.