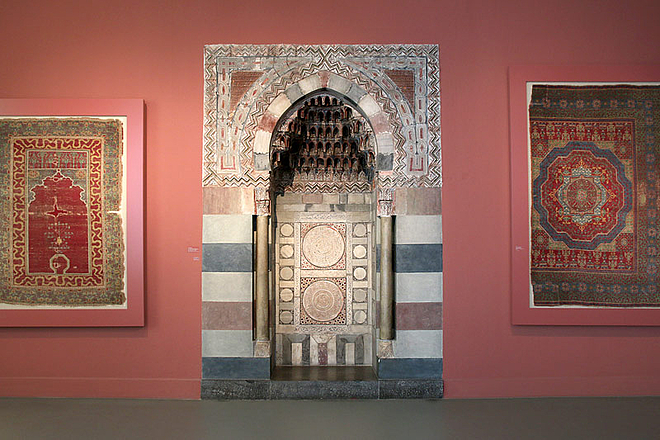 Even before I started with Multaka, every time I visited the Museum for Islamic Art I went to this niche, which by the way is not a prayer niche. Not only do I think it’s very beautiful; I associate personal memories with it. My school was in a building from Mameluk or Ottoman times in the old city of Damascus. As a child, I saw the marble, the frescoes, and the cupola room with a niche there every day. It was like a second home. Now when I stand in front of this niche in Berlin, it’s as if a little piece of the school of my childhood were before my eyes. I remember the colors, the material, and the sun on the marble, whose coolness I can almost smell.

I don’t really talk about such feelings during my tours, which focus on art-historical and societal aspects. But individual objects unavoidably rouse memories of their homeland among many who take part in the tours. When they see this niche, those coming from Syria often think of the Azim Palace in Damascus, whose coloration and materials are similar, or of the architecture of the famous Umayyad Mosque. This sparks conversation, and personal stories are told. Their sadness over losing the earlier, often pleasant way of living they were forced to leave behind is palpable again and again. In this way, we from Multaka experience very intensely the dramatically changed reality of these people, their experience of fleeing, and their fear of an uncertain future in exile.

An essential aim of our tours in the Islamic Museum is to use concrete exhibits to fortify awareness of mutual tolerance and peaceful coexistence among adherents of different religions. This Damascus niche is well suited to this. It was created under Islamic rule, but the building belonged to Samaritans, members of a Jewish ethnic group that lived in Syria from Late Antiquity into the early 17th century. Their quarter in Damascus was on a major street with very beautiful houses, very close to mosques and churches. This niche is a wonderful testimony to that tolerant period in which people of different faiths dealt peacefully with each other.

Samaritan Niche (Damascus Niche)
15th – 16th century, Damascus, Syria, from a no longer existing private house in the Malik az-Zahir quarter. Marble and colored stone, in part painted.
Height 302 cm, width 245 cm, depth ca. 70 cm
Although inspired by the Mihrāb architecture of mosques, this is not a prayer niche. The wall niche is from the bourgeois home of Samaritans lived – a religious community related to Judaism. The Samaritan inscriptions in the groins of the arch and on the rosettes on the rear wall are quotations from the Old Testament (Genesis and Exodus).
The marble facing, the stalactite vault, and the relief are typical decorative elements from the Mameluk period (in Damascus, 1250 - 1516). Several characteristics indicate the beginning Ottoman period, when this building tradition was initially still cultivated in the Arab provincial cities. At the beginning of the 17th century, the Samaritans were driven out of Damascus.
(From information and texts from the Museum for Islamic Art Berlin)

Razan Nassreddine
M.A., culture manager; coordinator of intercultural projects; co-curator of an international platform for art research in Berlin. From November 2015 to January 2017, part of project management team of Multaka: Treffpunkt Museum (Multaka: meeting place museum); museum guide in the Museum for Islamic Art in the framework of the Multaka project.