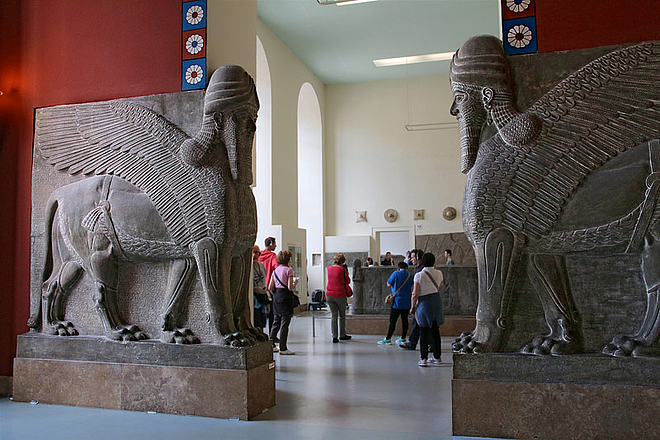 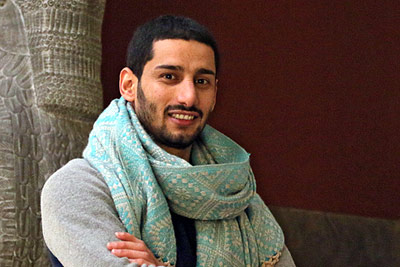 I conduct my guided tours for Multaka in the Vorderasiatisches Museum (Museum of the Ancient Near East). As an archaeologist, I specialized in the regions shown in it, and since I am an Iraqi myself, many of the exhibited objects fascinate me quite personally. I begin the tour for Arabic-speaking visitors with the museum’s most famous exhibit, the Ishtar Gate of Babylon, built around 600 B.C.E. under the rule of Nebachudnezzar II.

On their way through the various rooms, the people enter a different world and learn more about the long-ago history of the regions that are home for many of them. This makes them proud, and they take photos for their friends and families. I try to increase their consciousness that this pre-Islamic heritage is part of our identity and must urgently be protected. Since every group has someone with some knowledge of cultural history, discussions rapidly develop in which almost everyone takes part.

When we reach the two figures of Lamassu, these impress the visitors with their monumentality and the combination of the body of a winged bull with a human head. The figures in the Vorderasiatisches Museum are casts from the originals in the Palace of Nimrod from the Assyrian period (900 - 681 B.C.E.). Such guardian spirits of very hard stone stood at the inner and outer entrances to the palaces to demonstrate power and ward off evil.

Here, we remember the images that went through the media in early 2015 and made us all very sad. In an effectively staged, brutal measure, the so-called Islamic State destroyed cultural goods of inestimable value in the ancient sites of Ninevah on the shore of the Tigris River in northern Iraq and in the archaeological museum of Mosul. Among them was one such Lamassu figure.

Lamassu figures
Gatekeeper figures from the Nimrod Palace in Ninevah in the Assyrian period (900 - 681 B.C.E.) in what is now northern Iraq. At the Museum of the Ancient Near East in Berlin there are exhibited casts of the originals that are in the British Museum in London. The figures’ position today under an arch in the museum was adapted from the original position in the ancient city. Lamassu (also šedu, shedu) is the term for protective spirits with the bodies of bulls, wings, and human heads.

Hussam Zahim Mohammed
1987 born in Baghdad, Iraq. Lives in Berlin since 2006, studies Near Eastern Archaeology at Freie Universität Berlin. His research areas are Near Eastern Archaeology, cultural heritage and the archaeological museums in Iraq. He workes at several archaeological projects and participated in conferences, such as Oymaağaç-Nerik project (Turkey), ICHASM, AGYA. In the frame of the Multaka project he is tour guide at Vorderasiatisches Museum Berlin.