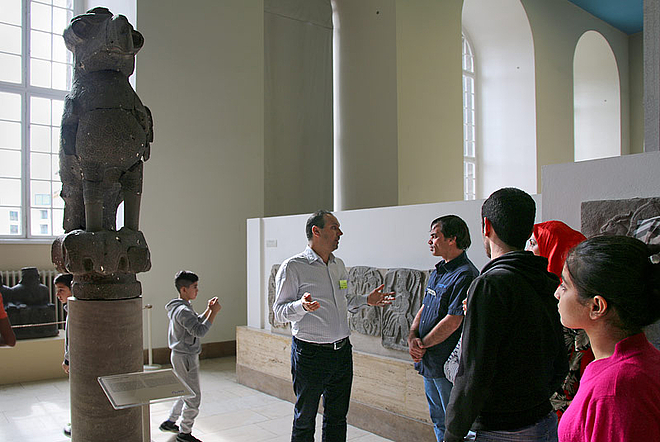 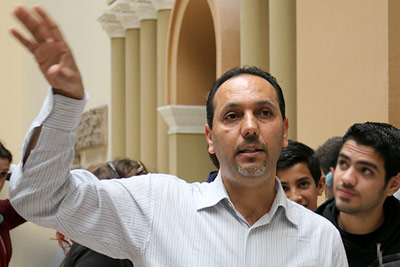 In a moment of reflection as I roamed through the halls of the Pergamon Museum, thoughts and memories came to me like brightly flashing lightning. They roused in me the story of my suffering and led me through the world of things that are interwoven between the past and the present.

I became a prisoner of the place as my soul found itself in each of its corners, flying over the times. While my soul journeyed in this way and breathed such testimonies of art and civilization, I was astonished at my feelings. Again and again, I asked myself why humanity – which is, after all, able to tame nature and recreate it with its own hands, to express the transparence of the mind, and, through imagination and creation, to let human creators believe in life, love, immortality, and hope and to articulate them in artistic testimonies full of beauty – why this humanity destroys our happiness and makes us feel like feathers in a storm.

I paused to contemplate for a while in front of a huge basalt bird with many cracks. Suddenly I realized that this bird had gained a new life by rising like a phoenix from the ashes. This bird and the artifacts from the Syrian archaeological site Tell Halaf in the Berlin museum were bombed during World War II, which laid waste to everything. But the fire of the war was unable to completely extinguish this, because the cycle of eternal life and the soul of humanity and art proved to be stronger.

After the war, the fragments of the huge bird and the other artifacts remained in the darkness of the museum cellar and, for the last 70 years, could be viewed only by researchers. But the legend of life and of the eternity of art gave hope and motivation to put its pieces back together, to be resurrected in all its glory and to proclaim the value of Syrian art and that Syria was a cradle of humanity and civilization. In this moment, I believed that hope will never die. And that it will rise again like a phoenix from the ashes.

Tell Halaf
Tell Halaf, situated in Northeast Syria, is eponymous for a part of the Pottery Neolithic period ("Halaf period", ca. 6000-5300 B.C.). After the Chalcolithic age, the place was obviously abandoned and not resettled before the early 1st millennium B.C. Under the name Guzana, it was first the location of the capital of an Aramaean principality, later the residence of an Assyrian governor.
The site gained prominence upon the appearance of a large number of sculptures which decorated a palace of the Aramaean prince Kapara (late 10th to early 9th century B.C.) and had been laid bare by the excavations undertaken by the German diplomat and scholar Max Freiherr von Oppenheim in 1899, 1911-13 and 1929. The numerous statues and relief-decorated orthostats show an iconography which is unique for the Ancient Near East. Some of these monuments were on exhibition in the Tall-Halaf-Museum in Berlin up until 1943, when it was bombed in the course of World War II shattering the objects on display there. In a grand project, the broken monuments were restored at the Vorderasiatisches Museum in Berlin.
From: Tell Halaf Ausgrabungsprojekt
See also: Tell Halaf Project

Bashar al-Mohammad al-Shahin
1971 born in Damascus, Syria. Studied Archaeology, worked for 15 years in the General Directorate of Antiquities and Museums, Ministry of Culture. Started in 2001 to work as a tourist guide in all regions of Syria. Since September 2015 in Berlin, working as a Multaka guide in the Vorderasiatisches Museum (Museum of the Ancient Near East). Organized an exhibition with photos of Syria before and during the war at the space of German photographer Wolfgang Tillmans. Participated in many art and cultural events.