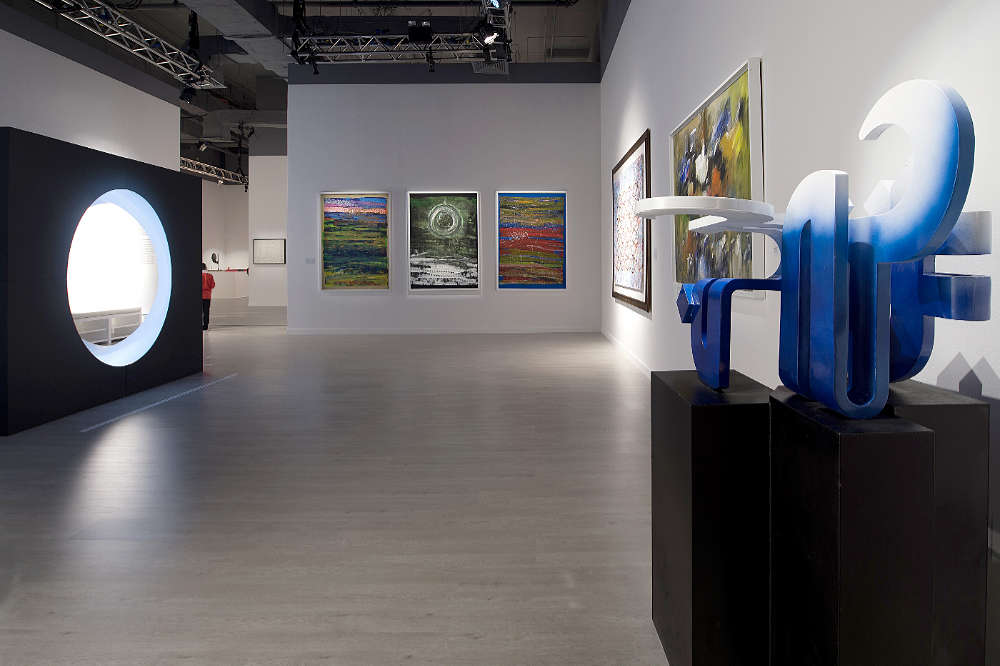 In 2021 Abu Dhabi Festival returns once again, as the region’s leading celebration of creativity and the arts, with stunning performances and remarkable exhibitions locally and internationally. This cornerstone of the capital’s annual cultural calendar brings UAE and international talent together, adapting to the current Covid-19 climate through a unique hybrid programme of virtual and in-person performances, exhibitions and events. The Festival will span an entire year with 16 exciting world premieres, 12 festival productions, eight global co-productions and four creative commissions. This continues the Festival’s efforts to further Abu Dhabi as a cultural hub and foster cultural diplomacy between the UAE and the world.

Underscoring its commitment to expanding global cultural exchange, creativity and innovation in the arts, ADF this year celebrates all the countries that have collaborated with it in the past to highlight the values of tolerance, openness and humanity that Emirati people hold for everyone. 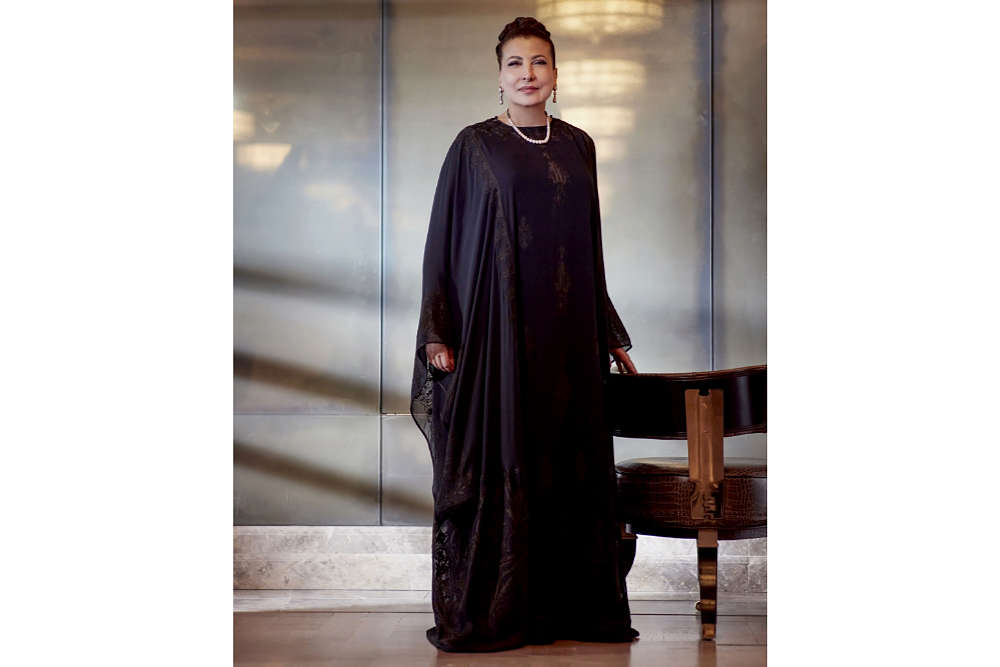 Her Excellency Huda I. Alkhamis-Kanoo said, “We dedicate these twenty-five years of ADMAF’s accomplishments to H.H. Sheikha Fatima bint Mubarak, the Mother of the Nation, our greatest inspiration, role model and supporter, and an icon of hope and giving. To our leader, H.H. Sheikh Mohammed bin Zayed Al Nahyan, Crown Prince of Abu Dhabi and Deputy Supreme Commander of the Armed Forces, we offer our deepest gratitude for his dedication to peace and prosperity and for the hope he provided as we face these difficult times when he said, "Do not despair for this shall pass."

Her Excellency continued, “This 18th edition of the Abu Dhabi Festival comes at a time of exceptional circumstances. The pandemic has changed our lives, and now, more than ever, the community must come together to cultivate hope, spark creativity and nurture innovation through culture and the arts. Under the theme ‘The Future Starts Now’, this edition will reaffirm the role the arts play in bringing humanity together in challenging times.”

Her Excellency added, "Right now, virtual events play a vital role in helping humanity through this challenging time, yet we believe in the importance of gathering under one roof to share an experience. In 2021, Abu Dhabi Festival will feature a hybrid programme of innovative digital broadcasts and in-person events. And, in celebration of 25 years of bringing the world’s best artists and performers to Abu Dhabi from all over the world, we will honour all the countries that have been represented in the Festival since its inception.

H.E. also noted, “The UAE is blessed with a forward-thinking, wise leadership that recognises the value of art and culture and sees it not as a luxury but as a necessity. With their encouragement and support, the festival will inspire established and emerging artists alike to bring new creations into being, to exchange ideas and experiences, and to cultivate resilience in the face of difficulties.”

“It is a time-tested wisdom — art serves as a beacon of hope in the face of great strife, it cultivates resilience and solidarity, it inspires us to invent and innovate for a better tomorrow. Now, when the world is navigating an unprecedented crisis, it is more important than ever for the community to band together and invest in culture and the arts. This year, ADF, under the theme “The Future is now”, takes a forward-looking approach — supporting the arts in this present moment will culminate in a brighter future for all of us, therefore”. 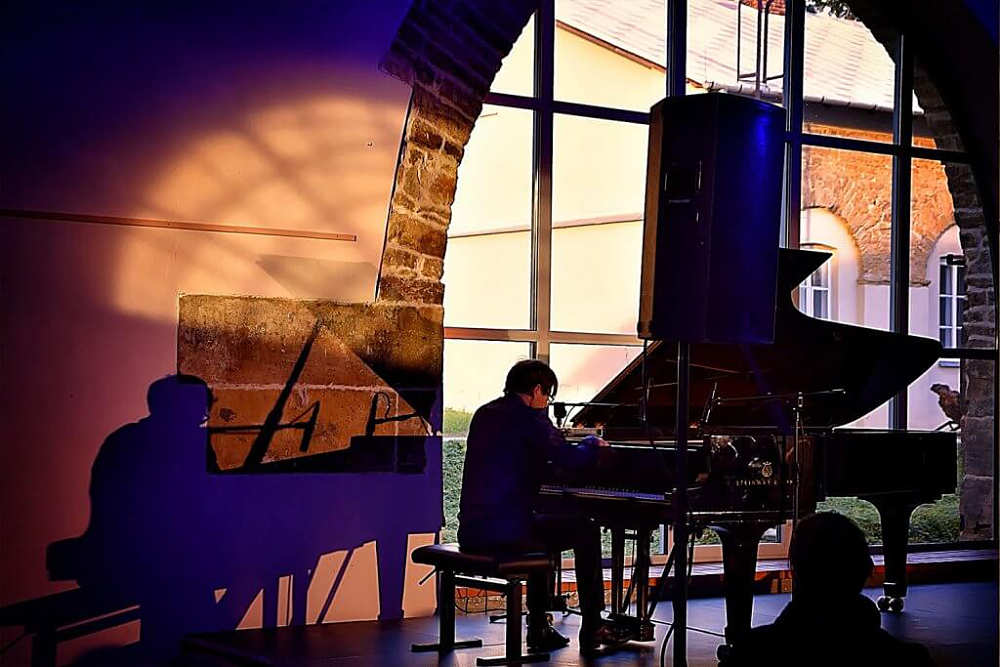 In two pre-Festival events, ADF partnered with Europe’s leading classical music festival, the Ludwig van Beethoven Easter Festival, and with American Ballet Theatre. In celebration of the 250th anniversary of renowned composer Ludwig van Beethoven’s birth and the 210th anniversary of the composer Chopin’s, Poland’s brightest young piano talents performed a series of recitals across 5 cities in Poland, co-produced by Abu Dhabi Festival and the Ludwig van Beethoven Easter Festival, which was founded in 1997 by Elżbieta Penderecki, wife of the late Krzysztof Penderecki, the great composer of the 20th Century.

The following ADF special commissions are an artistic expression of the country’s values of peace, tolerance and understanding.

1. The most internationally celebrated Emirati composer of his generation, Mohammed Fairouz composed the ‘Fifth Symphony’, inspired by the life of the UAE’s founding father Sheikh Zayed bin Sultan Al Nahyan, which will premiere in the British capital and be performed by England’s most prized orchestra, the London Symphony Orchestra.

2. ‘Opera L’Apocalypse Arabe’ is a world premiere in co-production with Festival Aix-en-Provence and the LUMA Foundation in France. Based on the poems of legendary Lebanese-American poet and visual artist Etel Adnan, with composition and libretto by the innovative avante-garde Palestinian-Israeli composer Samir Odeh-Tamimi and directed by the accomplished French-Lebanese theatre director and artistic director Pierre Audi, the opera will be performed by Frankfurt-based Ensemble Modern, a leading New Music ensemble of diverse musicians from across Europe and Asia, conducted by the notable Ivan Volkov.

ADF also commissioned the world premiere of ‘Al Hayat’. Composed and performed by Naseer Shamma with an outstanding international ensemble of Arab musicians, it is an inspiring message of hope that humanity will continue through even the most difficult challenges. 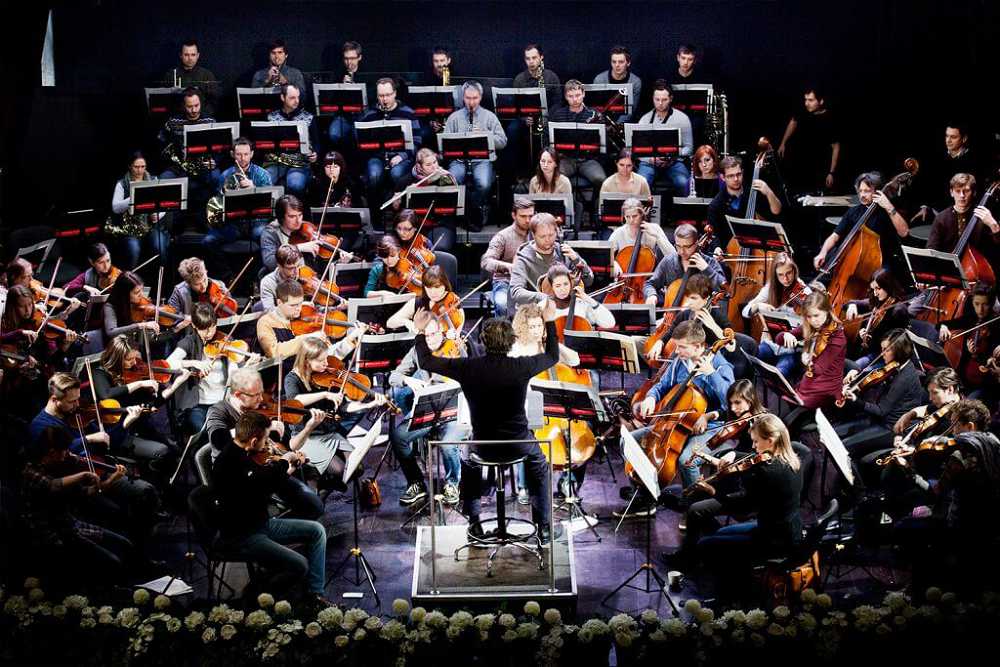 Other Festival highlights include:

‘Mohamed Briouel and Kudsi Erguner: Arab-Andalusian and Fasl Encounter’ is another world premiere and a co-production with BOZAR Centre for Fine Arts in Brussels. This unique collaboration brings together two masters of the classical music traditions of their homelands in Morocco and Turkey.

‘Tarek Yamani and the Spektral Quartet’, in a virtual world premiere, brings together the award-winning composer and jazz pianist Tarek Yamani performing with the multi-Grammy-nominated Chicago-based ensemble in a co-production with the University Musical Society of the University of Michigan ‘Story of the Violin’ with Nicola Benedetti, the most sought-after violinist of her generation, celebrates the history and emotional power of the violin and its iconic repertoire through a stunning solo performance that includes music by Biber, Bach, Paganini and Ysaÿe. This co-production with the Benedetti Foundation will collaborate with musicians throughout the world including in a composition by jazz legend Wynton Marsalis, in a digital world premiere.

The Global Oud Forum 2021 is a festival production organised and curated by oud master Naseer Shamma, featuring more than 30 of the world’s most accomplished oud musicians in performances, talks and workshops.

Palestinian jazz singer and musician Omar Kamal will continue his world tour, including the release of his latest single, ‘Now I Have a Family’ and his new jazz EP, ‘Late Nights with Omar Kamal’.

‘The Moons Symphony’, a new production by international award-winning composer Amanda Lee Falkenberg, will be performed in a virtual world premiere by the London Symphony Orchestra led by visionary Maestra Marin Alsop, with the London Voices. The symphony is based on scientific data collected by space probes and on emotional data collected from astronauts by NASA.

10 Emirates-based creatives discuss how Covid-19 has impacted their artistic practices in an online series of short documentaries curated by Emirati artist Jalal Luqman. This series of 5 episodes is part of Abu Dhabi Festival’s Riwaq al Fikr talks series. Art Amid Covid is in line with UNESCO’s initiative, ResiliArt a global movement that aims to strengthen the resilience of artists and cultural professionals in the face of the enormous challenges posed by the current health crisis.

The Al Ain Film Festival, now in its third edition, will collaborate with ADF 2021 as its strategic cultural partner to support the development of young filmmakers and spread the culture of cinema in the UAE.

ADF 2021 will also co-produce a documentary by the brilliant Emirati filmmaker Nasser Al Dhaheri chronicling the life of the late Sheikh Zayed bin Sultan Al Nahyan, founder of the UAE, when he was the Ruler’s Representative of the city of Al Ain – ‘Al Ain Hajar Al Ruha (1946-1966)’.

Another co-production is ‘Uncle Naji’ with Ahmad Zain Al Hashmi, the Emirati filmmaker and director of dozens of films. This feature film is a new comedy starring Ibrahim Al Meresi, social media influencer Mohammed Al-Kindi and a cast of Emirati actors. 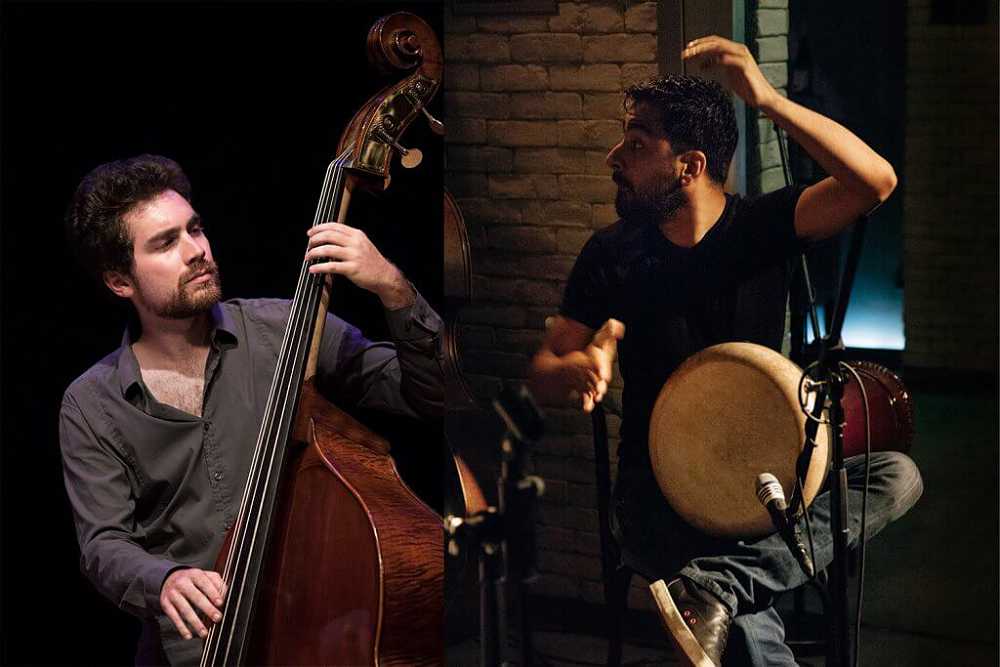 The festival’s programme line-up will also include ADF’s Youth Platforms –multidisciplinary, capacity-building programs to empower Emirati youth and help them hone their skills and maximise their potential.

Another returning festival favourite will be the Composers’ Platform. This year’s edition will feature ‘A Journey with the Arabic Oud’, organised by the Foundation for Arab Music Archiving and Research in Lebanon. It will also introduce Cairo Jazz Station, young performers blending jazz and contemporary Middle Eastern music. Their first album will be released as part of a collaboration between ADF and Festival Aix-en-Provence. 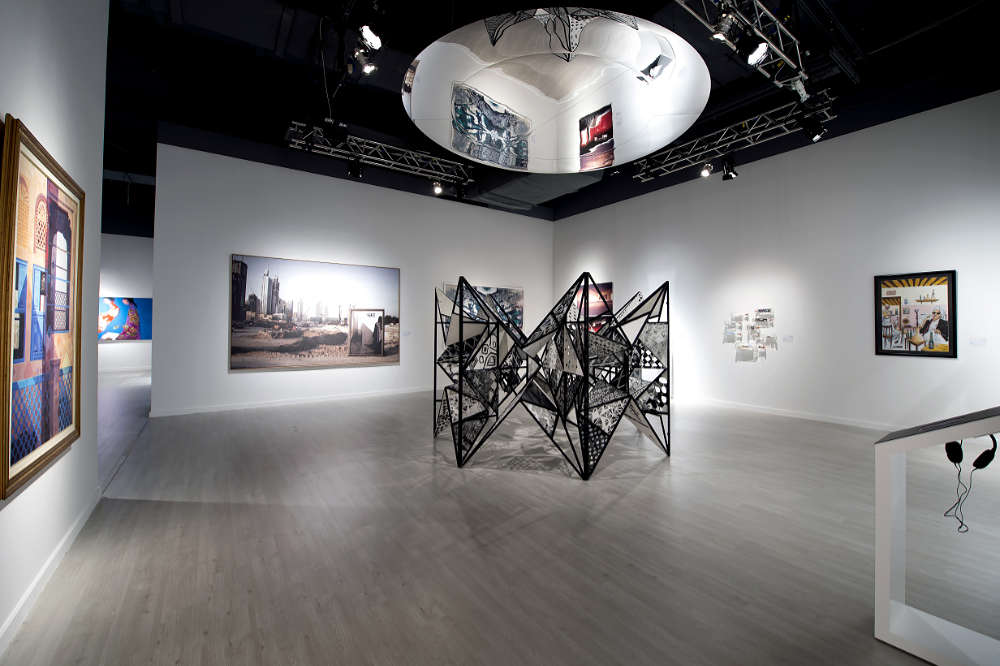 As part of its showcase of the visual arts, ADF 2021 will host ‘Dance me to the End of Night: Spirituality in Art Inspired by Islam from the 10th Century until Today’, a unique exhibition at the Museum Angewandte Kunst in Frankfurt am Main featuring works by the most influential contemporary artists from the UAE and the Arab world.

The festival has partnered with Art D’Egypte to mount ‘Forever Is Now’, an exhibition showcasing contemporary art from throughout the region and the world, held at the plateau of the Great Pyramids of Giza. Curated by Art D’Egypte along with a board of internationally renowned curators, among whom is Simon Watson, the exhibition honours Egypt’s greatest sculptor, the late Adam Henein, and features works by Emirati artists among many other amazing creatives.

‘Portrait of a Nation II: An Odyssey’, touring the capitals of the world, is a landmark exhibition of UAE-based visual artists created and organised by ADMAF. This second edition will trace the odyssey of extraordinary growth in the UAE’s art scene from a fledgling regional hub to a global destination. Internationally acclaimed art historian Maya El Khalil will guest curate the exhibition with curator, author and former Sotheby’s Deputy Chairman for the Middle East Roxane Zand, as well as Emirati artist and ADMAF Visual Arts Consultant Jalal Luqman to deliver a unique glimpse into this journey.

POAN II will be accompanied by two books that traces the history and development of UAE’s vibrant art scene.

About the Abu Dhabi Festival

Founded in 2004, Abu Dhabi Festival was initially a small arts and culture platform that soon graduated to one of the world’s premiere annual events. Held in the UAE, it celebrates artistic and creative excellence, and promotes the role of music and the arts in bringing nations closer. It also promotes Abu Dhabi as a leading global hub for creativity and as an Emirati beacon for respect and tolerance.

Strengthened by a growing network of 30 international partners, the festival brings audiences together each year to enjoy world premieres and exclusive commissions in the UAE and around the world.

Founded in 1996, ADMAF is one of the oldest, not-for-profit cultural organisations in the Arabian Gulf. Pioneering new artistic practices, it seeks to deepen global cross-cultural dialogue and inspire a renewed interest in the creativity of the UAE and Arab world. Often in partnership with leading national and international institutions, it delivers multidisciplinary initiatives for people of all ages, backgrounds and nationalities through the Abu Dhabi Festival, year-round youth platforms and community programmes.