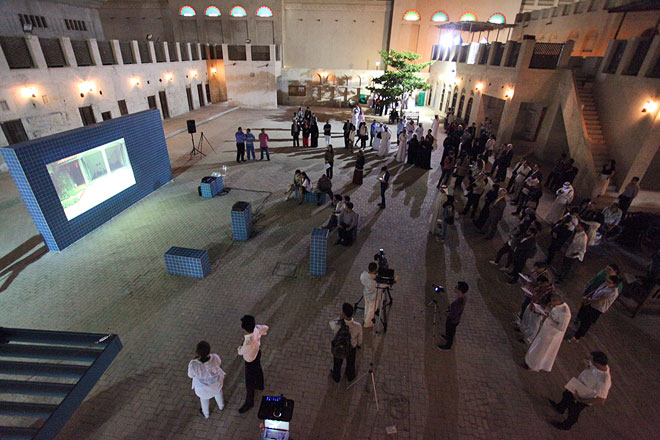 Continúa en inglés:
Pilot Micro Multiplex│Mall comprises three projects that include two fully functioning shops and an open-air gathering and screening space. Together, these interventions juxtapose an exhibition with a commercial space as a means of encouraging new understandings of public space, cultural engagement and commerce.
Pilot Micro Multiplex | Mall proposes an exhibition in the form of a micro mall in an attempt to challenge presumptions about exhibitions. It questions the way in which we interact with objects placed on display and made available for purchase. By inviting visitors to browse and familiarise themselves with second-hand books and products from foreign places, and by encouraging them to attend and even contribute to a programme of events, Pilot Micro Multiplex | Mall implicates its audience in the construction of the overall situation.

The Sharjah instalment of Heman Chong’s LEM 1 bookshop offers visitors a space for browsing and purchasing second-hand science fiction and fantasy books. This fully functioning bookshop sets up the conditions for an array of possible experiences that themselves constitute the artwork. This approach stands in contrast to the more conventional method of creating an artwork and placing it on display as an object distinct and separate from the viewer. By making second-hand science fiction and fantasy books available at an affordable price of AED 5, Chong invites buyers to interact with one another and the available commodities.

Dirk Fleischmann’s myconceptstore is a shop that displays a variety of products accumulated during the artist’s past decade of developing economic projects. In Sharjah, Fleischmann’s myconceptstore showcases a new product – a chandelier created by artist Sunju Park. This chandelier is both a light source and a structure within which the other products are displayed. At this fully functioning store, visitors may purchase any of the commodities on display, and in keeping with Fleischmann’s business plan, all profits are reinvested in his existing economic projects or are directed at new ventures. This practice draws attention to the criteria we employ to define our experiences as exhibition viewers or even as consumers.

Jun Yang’s  Micro M and a proposal for a public space - a cinema consist of a series of new interventions specific to the fabric of Bait Al Shamsi, which propose a repurposing of how it functions as an area for public gathering. Yang draws attention to the entrance adjacent to the Corniche by appropriating the advertising language found in the surrounding environment. This releases the building from the abstract temporality imposed by its heritage status and re-integrates it into the ‘lived present’ of the area in which it is situated. Yang’s other intervention, the reconfiguration of the courtyard into an open air screening or gathering arena, further enables the building to act as an active territory. This installation, comprising a temporary projection wall and multipurpose tile blocks, proposes the actualisation of Bait Al Shamsi’s potential as a place for open programming. Presented as a proposal, the temporary cinema space and programme are intended as devices to be appropriated and reconfigured by eventual participants.

Curated by Sharjah Art Foundation’s Research and Experimentation Projects Curator Claudia Pestana, the opening of the exhibition on October 3 featured a screening of Jun Yang’s short film Paris Syndrome with an introduction by the artist and <emphasize>Stop Show: Open to everyone!</emphasize> Dirk Fleischmann’s game show where contestants compete to be the best at timing 10 seconds.