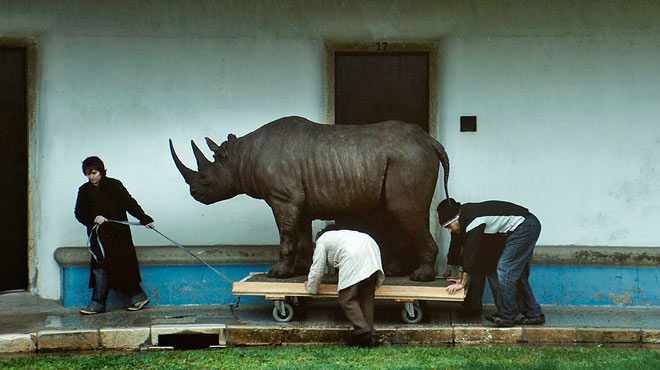 From 22 January to 26 February 2011, Arratia/Beer Gallery in Berlin presents O Rinoceronte de Dürer (Dürer’s Rhinoceros) a new film by Javier Téllez, originally commissioned by CAM-Gulbenkian foundation. O Rinoceronte de Dürer was filmed entirely on location at the panoptic of the Miguel Bombarda Hospital in Lisbon and made in collaboration with psychiatric patients of the day clinic, who are the main cast of the film. Built in 1896 within the grounds of the largest Psychiatric Hospital in Lisbon, the panoptic was designed as a prison for the criminally insane, following the original plans of Jeremy Bentham. The building housed more than 300 patients cramped in small cells that surrounded a central tower. This prison was used until the year 2000 and since then became a museum.

The fragmentary narrative of O Rinoceronte de Dürer was conceived by the patients in a series of workshops conducted by the artist prior to the shooting of the film, where they imagined themselves as inhabitants of the former insane asylum and acted out fictional scenarios within their assigned cells. This reconstruction of the everyday life of the mental institution is complemented by voice-overs quoting texts like Jeremy Bentham’s letter presenting the Panoptic, Plato’s Cave, Kafka’s short story "The Burrow". These texts are concerned with different architectural models related to the overseeing power of the gaze.

Téllez’ film takes its title from the famous engraving of Albrecht Dürer, an icon intrinsically related to the history of Portugal, that represents Ganda, the first rhinoceros to visit Europe in the XVI century. The animal came to Portugal in 1515 as a gift to King Dom Manuel I, and was later sent overseas as a present to Pope Leon X, only to die in a shipwreck on its way from Portugal to Italy.

Although some historians affirm that the cadaver of the rhinoceros was later stuffed and shown in Rome, it is certain that Dürer never saw a rhinoceros in his life. He, however, made drawings and an engraving based on descriptions of Ganda, a classic example of the unlimited strengths of imagination when confronting the unknown.

Ganda is used by Téllez as a leitmotif that structures the film narrative: Throughout the piece we watch an embalmed rhinoceros pulled counter clockwise around the circular architecture of the panoptic. The reference to Dürer’s Rhinoceros in Tellez’ film could be read as an allegory of melancholy, especially when juxtaposed with the architecture of surveillance in the psychiatric institution.

The special appearance of famous Fado lead singer Aldina Duarte, performing a song inside one of the cells, furthers the melancholic character of the film. O Rinoceronte de Dürer reflects on one of the traits of Portuguese cultural identity, described by the word "Saudade", a term difficult to translate, used to define a fatalist emotional state of longing for something or someone that one was fond of and which is lost. This feeling includes a repressed knowledge that the object of longing might never return.

Working with mental patients has been a constant feature in Javier Téllez’s work: As the son of a couple of psychiatrists, he has a familiarity and proximity with the world of mental illness, which allows him to create works in which the psychiatric patients intervene in their own representation, escaping the stereotypes that society construct around people who live with mental illnesses. Through Téllez’ work, viewers are aware of the relativity of the notions of normalcy and pathology.

O Rinoceronte de Dürer is complemented in the exhibition by a recent sculpture of Téllez’s Matthew 19:24, a work that combines a large reproduction of a drawing by Kafka with a figure wrapped by tread representing a camel. The piece proposes, albeit with humor, a solution to the biblical parable of the camel and the needle.