Exhibition at the ifa galleries in Stuttgart and Berlin, Germany. Curated by June Yap, including 6 artists. 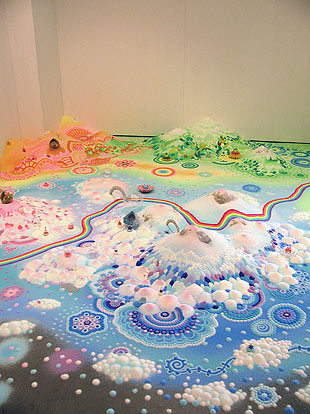 Paradise can only be imagined. It is an unattainable location of longing, even if commerce attempts to lure us into its wonderlands of retail, holidays and wellness. In the exhibition Paradise is elsewhere at ifa-Galerie Stuttgart artists from the Asia-Pacific look at notions of paradise – and critically address our never-ending longing for a Garden of Eden.

Nicole Andrijevic‘s floor installations – landscapes composed of towers of sugar and islands of foam – allude to the fleeting nature of always distant locations of longing, which Jason Wee in turn explicitly identifies. In his installation he addresses the archetypical paradise motif, the South Sea island, which in the case he uses became the subject of a political and strategic dispute between Singapore and its neighbour Malaysia. In her three-part photo cycle, Yee I-Lann explores the lost paradise of Sabah in the north of Borneo, looking at the effects of changes to the landscape on living conditions. As notions of paradise are always determined by deficits in the here and now, Leung Chi Wo presents in a public forum the wishes of the citizens of Hong Kong regarding their own city –"Asia’s World City". A new museum for contemporary art or more green spaces in the city are certainly not what the people of Stuttgart would urgently desire, but perhaps they would like more cycle paths, more colour and creativity, and cheaper lychees?

Notions of paradise always also refer to the inhabitants of paradise – who should be young, beautiful and healthy. This image and view of the body is reflected by Hye Rim Lee in Bunnyhäschen TOKI, which presents and parodies the ideal of beauty for Asian women, influenced by mangas, animes, computer games and cyber culture. Jason Banal’s performative installation with tableaux vivants, by contrast, refers to films such as Alain Resnais’ Last Year at Marienbad and Luis Buñuel’s El Angel Exterminador. With remarkable poetry, he visualizes mourning for the loss of paradise and the fact that fiction and reality cannot be distinguished from one another. The alternative worlds and designs for a better life are all either in the past or in the future. For us they may be on the Maledive islands and for Indian cinema they may be on the glowing meadows of the Alps – paradise is always somewhere else...

(Press release of the ifa)