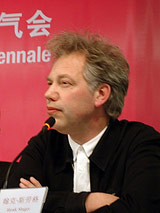 Research and visual art have been the focus of many activities developed by Henk Slager over the last ten years. As professor of artistic research he has made significant contributions to the debate on the role of research in visual art and as Dean of the Utrecht Graduate School of Visual Art and Design (MaHKU) he has contributed to the launching of productions such as the yearly Dutch Artistic Research Event (DARE) and the publication of the biannual MaHKUzine, Journal of Artistic Research.