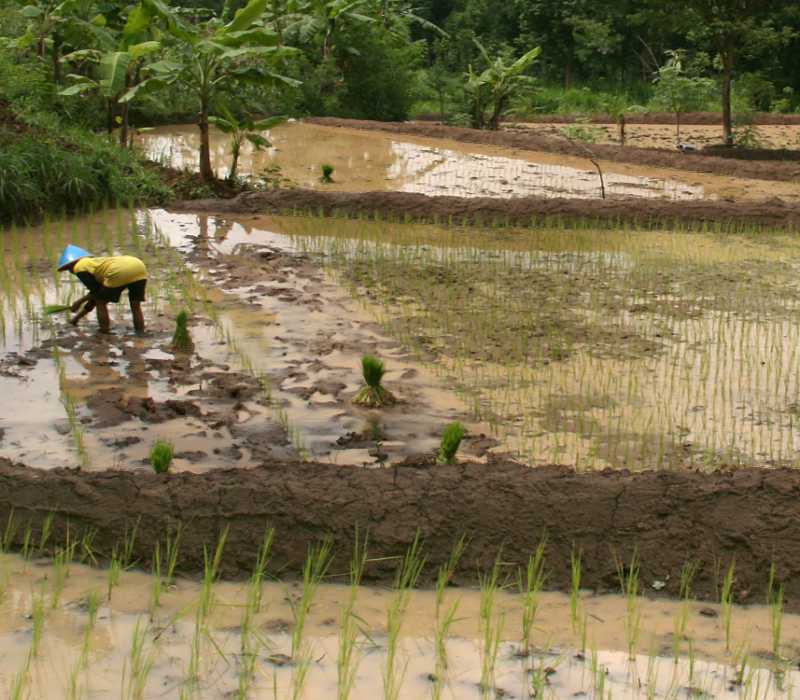 Melani Budianta
Professor of Literature and Cultural Studies in the Faculty of Humanities at the University of Indonesia and a member of the Inter-Asia Cultural Studies Society. Since the late 1980s, Budianta has undertaken research and writing focused on gender and cultural activism. Her articles have been published in academic journals, newspapers, and magazines. During the Asian financial crisis of 1997–1998, she participated in Indonesia’s women’s movement. In 2020, Melani Budianta presented her talk Lumbung Budaya Sepanjang Gang or Cultural Granaries Along the Alleys, organized by the Jakarta Art Council.

Armin Salassa
Farmer and activist in Bulukumba, South Sulawesi, Indonesia. In 2011, Salassa—along with farmers from the village where he was born—began implementing natural farming, an organic practice that has long existed in many other areas of the archipelago. Natural farming techniques combine scientific knowledge with wisdom, stories, and practices inherited from ancestors, removing the need for chemical fertilizers, pesticides, fungicides, and herbicides. Since 1993, he has worked as a community organizer in various locations throughout Indonesia and advocated for the denied rights of Indigenous people in Palu, Central Sulawesi. Since 2007, Armin Salassa has assisted community organizations in numerous Indonesian villages, including Aceh, Sumatra, following the 2004 tsunami.

Jumana Emil Abboud
Her creative interests lie in oral histories, personal and collective stories, and mythologies, particularly folk tales and their sites of being and unbeing. Abboud uses storytelling, performative elements, and workshop methodologies in her artistic practice to investigate our relationship to time and place, to the human and non-human, exploring tools of memory, attachment, and dispossession amid the challenge for continuity within political, ecological, and cultural struggles. Her work has been shown at The Jerusalem Show; BALTIC Centre for Contemporary Art, England; Sharjah Biennale, United Arab Emirates; Istanbul Biennale, Turkey; and Venice Biennale, Italy, among many others. She has participated in art residencies including, Sakiya – Art/Science/Agriculture, Palestine; Delfina Foundation, England; Arts Initiative Tokyo, Japan; and Guestatelier Krone, Switzerland. Jumana Emil Abboud is currently pursuing a practice-led PhD at the Slade School of Fine Art, University College London.