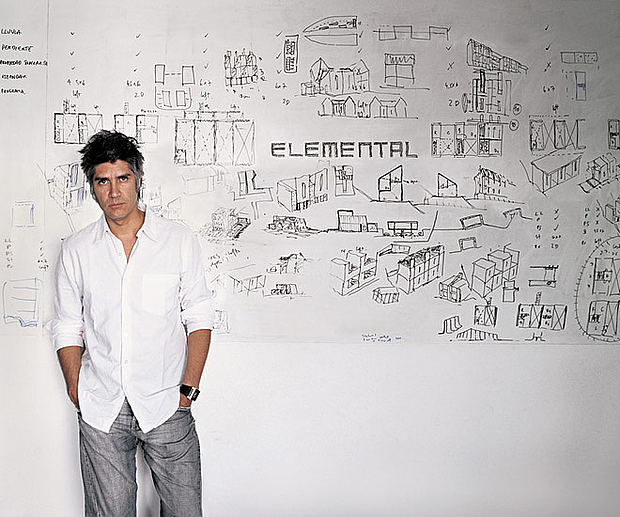 Alejandro Aravena (* 1967 Chile) graduated in Architecture from Universidad Católica de Chile in 1992. In 1991, still as a student, he participated at the Venice Prize of the 5th International Architecture Exhibition of la Biennale di Venezia. In 1993 he studied History and Theory at IUAV and engraving at the Accademia di Belle Arti di Venezia.

He established Alejandro Aravena Architects in 1994. His work include several buildings for Universidad Catolica: Mathematics School (1998), Medical School (2001), Architecture School (2004), Siamese Towers (2005) and more recently the Angelini Innovation Center (2014). It also includes a Montessori School (2000), St. Edwards University in Austin, Texas (2008), a Children Workshop and Chairless for Vitra in Germany (2008), writer’s cabins for Michalsky Foundation in Switzerland (2015) and a building for Novartis in their new campus in China (2015). In 2013 he was shortlisted for the New Center for Contemporary Arts of Moscow and won the competition for the Teheran Stock Exchange in Iran.

From 2000 until 2005 he was professor at Harvard University, where together with engineer Andres Iacobelli he found the social housing initiative ELEMENTAL, an Urban Do Tank, partner of Universidad Catolica and Chilean Oil Company Copec. Since then, Elemental has expanded their field of action to a wide range of infrastructure, public space and public buildings that use the city as a shortcut towards equality: the Metropolitan Promenade and Children’s Park in Santiago, the reconstruction of the city of Constitucion after the 2010 earthquake, the redesign of the Copper mining town of Calama or the intervention of the Choapa Region for Pelambres Mining Company.

Since 2009 he is member of the Pritzker Prize Jury. In 2010 he was named International Fellow of the Royal Institute of British Architect and identified as one of the 20 new heroes of the world by Monocle magazine. He is a Board Member of the Cities Program of the London School of Economics since 2011; Regional Advisory Board Member of the David Rockefeller Center for Latin American Studies; Board Member of the Swiss Holcim Foundation since 2013; Foundational Member of the Chilean Public Policies Society; Leader of the Helsinki Design Lab for SITRA, the Finnish Government Innovation Fund. He was one of the 100 personalities contributing to the Rio +20 Global Summit in 2012. He was also a speaker at TED Global in 2014.