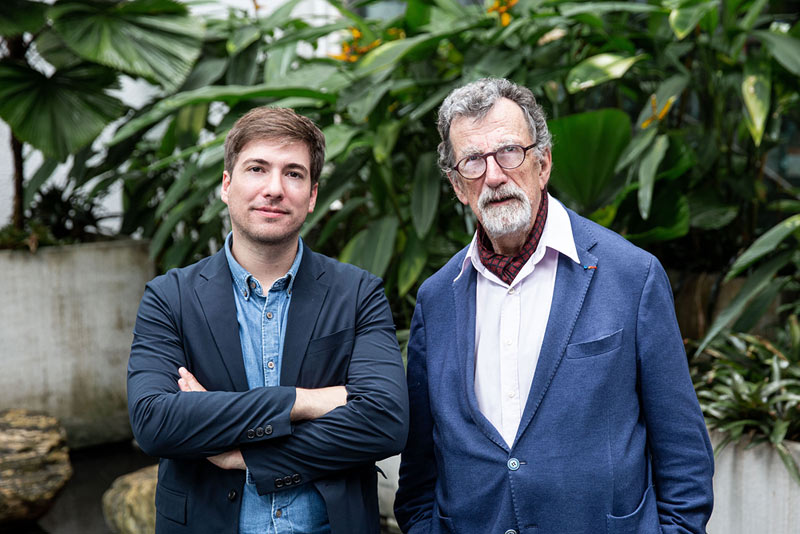 Born in 1947 in Beaune, France, Bruno Latour is now professor emeritus associated with the médialab and the program in political arts (SPEAP) of Sciences Po Paris. Since January 2018 he has been a fellow at the Zentrum für Kunst und Media (ZKM) and professor at the Karlsruhe University of Arts and Design (HfG), both in Karlsruhe, Germany. A member of several academies and recipient of six honorary doctorates, he received the Holberg Prize in 2013. He has written and edited more than twenty books and published more than 150 articles. The major international exhibitions he had curated are: Iconoclash Beyond the Image Wars in Science, Religion and Art with Peter Weibel in 2002, Making Things Public: Atmospheres of Democracy in 2005, and Reset Modernity! in 2016. The catalogs of all three exhibitions are published by MIT Press.

Martin Guinard is an independent curator based in Paris, with a background in visual arts and art history. He has worked on several interdisciplinary projects dealing with the topic of ecological mutation. He has collaborated with Bruno Latour on four international projects over the last four years, including Reset Modernity! at ZKM in 2016 as well as a reiteration of the project through two workshop platforms in different geographical contexts: the first in China, Reset Modernity! Shanghai Perspective as part of the 2016 Shanghai Project; the second in Iran, Reset Modernity! Tehran Perspective curated with Reza Haeri at the Pejman Foundation and the Institute of History of Science of Tehran University. He is now a guest curator at ZKM working on Critical Zones, Observatory for Earthly Politics. Other projects include the co-curation of a 2000 sqm section of the Socle du Monde Biennial in Herning, Denmark.

Eva Lin habitually escaped from the conventional venue to engage experiments with interdisciplinary practice questioning reality and its perception in order to extend the agency and force of art. Lin’s dynamic interests drive her into alternative thinking and response to cultural production in diverse forms. She recently curated Parallax 2017 : Damage Control , The Hidden South 2018, The Upcoming Past 2019, Ryoji Ikeda Solo 2019 ( co-curator Jo Hsiao) . She is founder and director of mt.project.