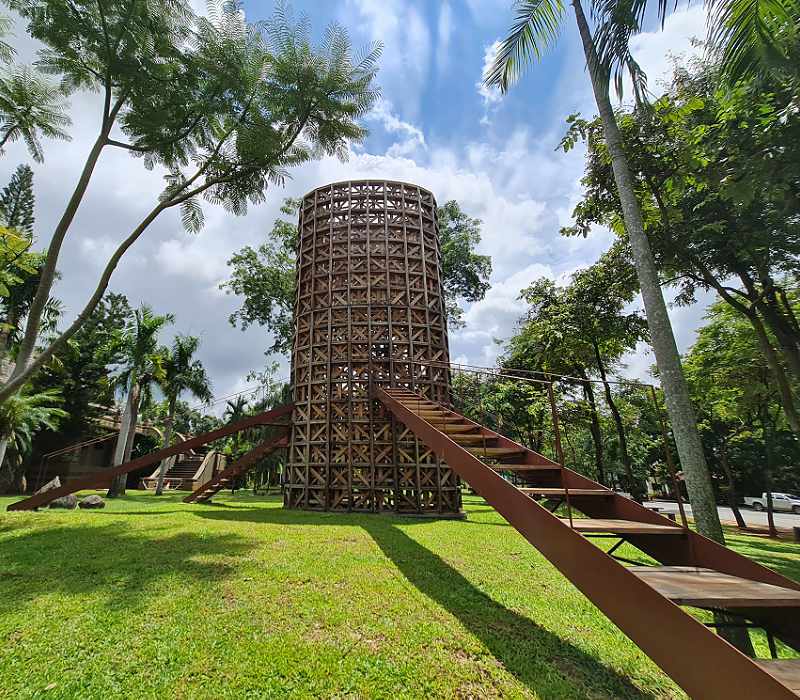 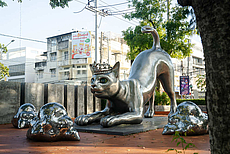 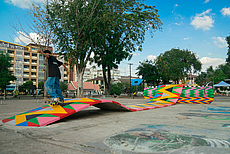 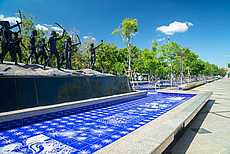 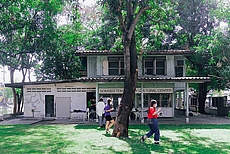 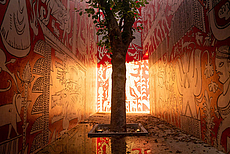 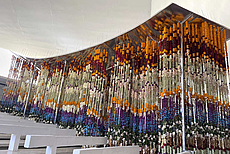 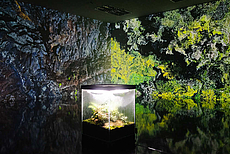 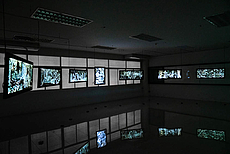 Initially, all the artists were expected to come to Korat for conducting on-site research and produce their work, but overseas artists were unable to travel due to the pandemic. It has been a challenge for all involved to create site-specific works at 14 locations with remote research and virtual cooperation. However, the artists’ hard work and passion for creating what was best for the site, while changing their proposals a few times, combined with their incredible imagination and simulation skills, made the local staff sympathetic and involved. Consequently, the plans and visions proposed by the artists, through the interpretation and imagination of the local partners, became a substantial joint production.

For example, Sandra Cinto has covered a promenade in the center of Korat city with blue tiles utilizing motifs taken from drawings made in a workshop with local children. Japanese architect Tsuyoshi Tane has activated the aura of the Khmer relics placed in the outdoor storage of the Phimai Museum with a light/sound installation. Thai architect Boonserm Premthada has built a wooden nine-meter tower structure in the city's zoo inspired by traditional rice barns, but to be used as a feeding ground for animals, and encountering place for people.

KEIKEN, a three female artists collective, created an online decision-making game and non-fungible token (NFT) collectibles project that is playable both online and on-site at the biennale. Charlotte Dumas, inspired by a conversation with her daughter during the lockdown period, focused on the complex relations between human society and animals with an elephant procession on traditional Dutch glazed tiles, combined with video and photographic works. Yllang Montenegro modified her initial project to a sculptural installation using live plants and aprons made from recycle materials by the local Filipino community. It can be seen in the pavilion of the Monument to Thao Suranari, a heroine of the city.

The fact that the Rajamangala University of Technology Isan – one of the 14 venues – has been facing repeated lockdowns inspired Nile Koetting to imagine this situation as an airport lounge and performative installation where flights are repeatedly canceled and postponed. At an outdoor seminar hall of the University, PHKA, a floral designer studio that uses flowers and plants as a tool for storytelling, created a garland installation meant as a prayer to the future of the city.

Zai Tang collaborated with the Thai Crane Research Centre to conceive a sound installation inspired by Eastern Sarus Cranes’ unison calls, highlighting endangered species and the region’s conservation effort. Botanist Stefano Mancuso and PNAT installed sensors in a giant banyan tree at a temple and connected it to a glass-enclosed pavilion with purified air produced by plants to listen to the tree's voice through light signals.

Permanently installed artworks commissioned by the Biennale explore relations between local cultures and nature, such as Krit Ngamsom’s sculpture of Korat Cat in front of the Art Gallery, which highlights bonds between animism and abundance, while Pomme Chan's large ceramic mural at Nakhon Ratchasima Zoo combines prehistoric biodiversity with augmented reality technology.