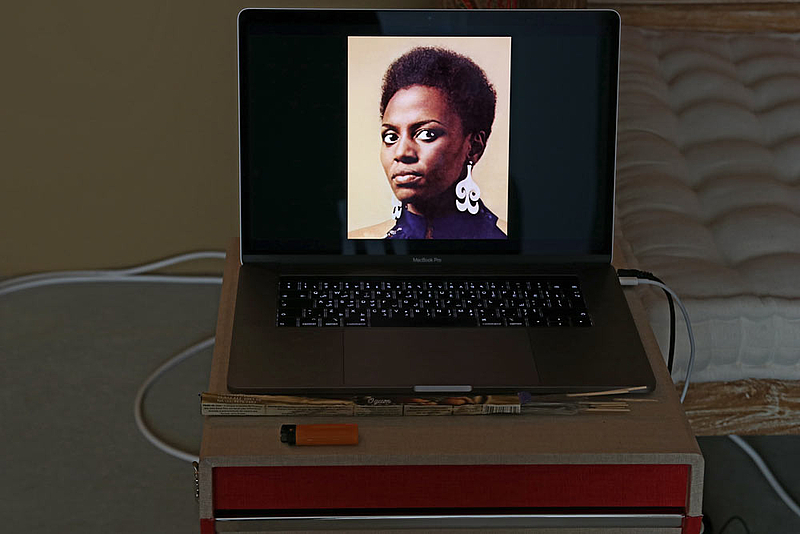 Neo Muyanga's music and compositions draw on a variety of styles and themes, including Renaissance madrigals, operettas and acoustic pop. In previous projects, he has looked at the role of protest songs in South Africa's liberation, a concern that serves as a foundation for his SB14 project.

In House of MAKEdbA (2019), Muyanga performs in memory of Miriam Makeba (1932-2008). Although much has been written about Makeba as a jazz singer and intellectual, her role as primary translator of what it meant to be an African in a world of declining empire has been reduced to a footnote of modern history and largely obfuscated and 'domesticated'. Unable to return home due to her outspoken views on apartheid, Makeba lived for a time in 'Muslim Africa', performing, for example, at the 1978 Pan-African Games in Algiers. Her presence at the games elevated the minority view of Guinea (then her host country) that the Maghreb countries should be included under the banner of Pan-African solidarity.

Muyanga's performance during the opening week of SB14 activates his installation at Al Hamriyah Studios. He performs with two record players and weaves Makeba's voice between his own compositions, creating the space of a healer and a shrine. For the duration of the biennial, the artist invites visitors to play the records and dwell in the restorative sounds of Makeba's legacy. Composed and conducted by Muyanga, the vinyl recordings in MAKEdbA feature a chamber orchestra and four singers: Tine Mene, soprano; Siphokazi Molteno, alto; Ongama Mohlontlo, tenor; and Theo Magongoma, baritone. For Muyanga, the value of a Miriam Makeba today is that she points us to a global future of contingency, of exile-for-all, and a questioning of the assumption that a home is static, homogenous and hermetically secured.