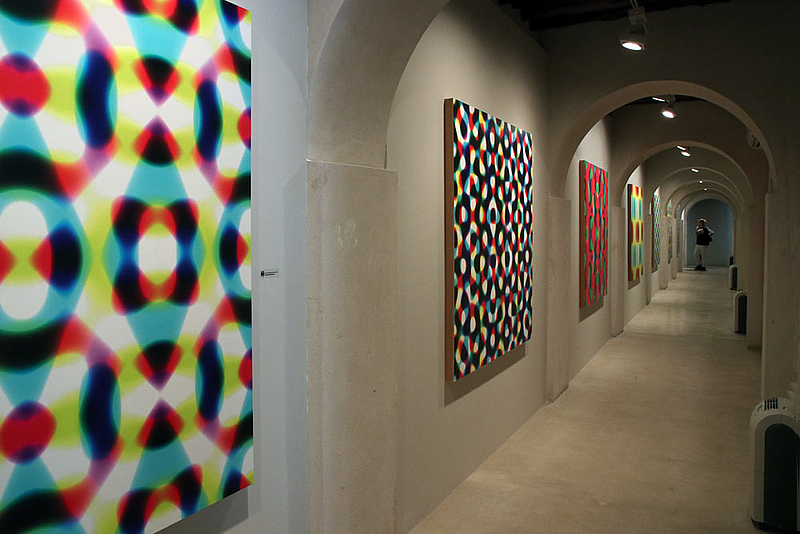 Stan Douglas' conceptual approach to photography, film and television draws attention to their respective aesthetic conventions and modes of production as well as their cultures and histories. In his film work, time is a recurrent concern. Archival scenes are slowed down, looped and recreated with subtle changes to explore a sense of the uncanny through painstaking production of a double. Similar to his films, the artist's photographs possess a cinematic vision and often recreate scenes, for example, from historical events such as the 1971 Vancouver riots. In such works, he carefully employs models and props to capture times of unrest and change. The technologies used in his work have developed in recent years, and he has created DCTs (discrete cosine transforms), which are nonfigurative sets of images that challenge the representation of reality in photography.

For SB14, the artist presents a series of DCT works from 2017, including RCCR, AMMA, E66E, 4400, 6AA6, G44G and 4CC4. Douglas describes these works as 'synthetic pictures' that reflect on the optical qualities of photography. To produce these works, the artist has used a custom programme to manipulate the sequence of data that determines how JPEG images are compressed, altering the frequencies, amplitudes and colour values. These vivid abstractions, which are printed on large square panels primed with gesso, contort contemporary notions of the photographic. Distinct from Douglas' previous projects that use the fictional to convey historical realities, these new works blur photography's impulse to document and painting's concern with transcendent expression.

This presentation is supported by Canada Council for the Arts.