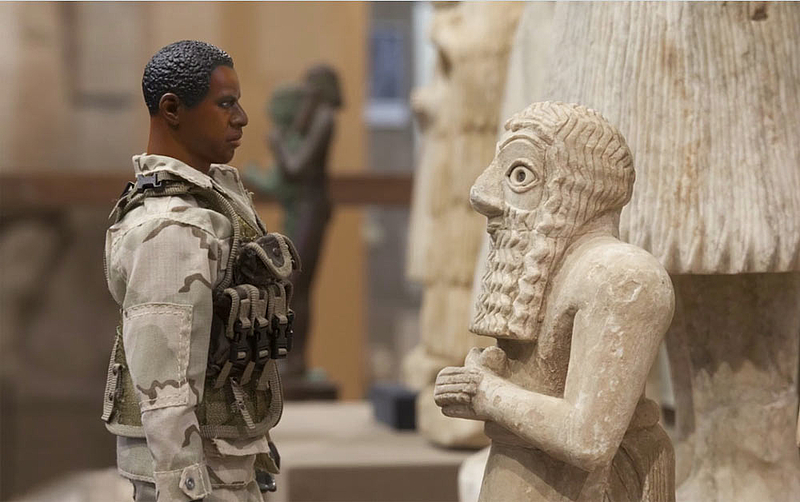 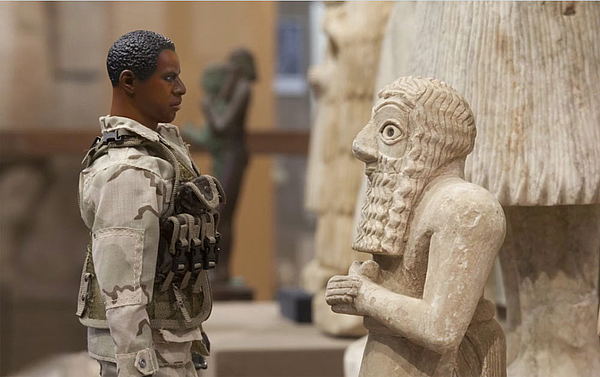 Michael Rakowitz works in a range of mediums, from video, sculpture and public interventions to the organisation of social gatherings. In his research into political and historical events, which often unearths obscure knowledge and anecdotal stories, he forges uncanny connections between current events, popular culture, cultural heritage, migration and diaspora.

The Ballad of Special Ops Cody (2017) takes as its starting point a 2005 incident in which an Iraqi insurgent group posted a photograph online of a captured US soldier named John Adam. The group threatened to kill him if US-held prisoners in Iraq were not set free. The US military took the ultimatum seriously but were unable to identify John Adam within their ranks. As it turns out, this soldier was actually Special Ops Cody, a US infantry action figure made to exacting detail. These toys were sold exclusively on US military bases in Kuwait and Iraq and were often sent home to the children of active soldiers, functioning as a surrogate for their fathers deployed abroad.

For his SB14 work, Rakowitz plays off this story and gives life to the figurine through the production of a stop motion animation filmed at the University of Chicago's Oriental Institute, which has had a relationship with the National Museum of Iraq since the 1930s. In the animation, Special Ops Cody enters the Institute's vitrines, which hold Mesopotamian votive statues taken during Western colonial exploits. Left behind by worshippers, these votive statues, with their hands clasped in prayer, served as surrogates for those who visited the temples of their deities. Although Cody offers the statues liberation, urging them to leave their open vitrines and return to their homes, the statues remain, petrified and afraid, unable to return in the current context.