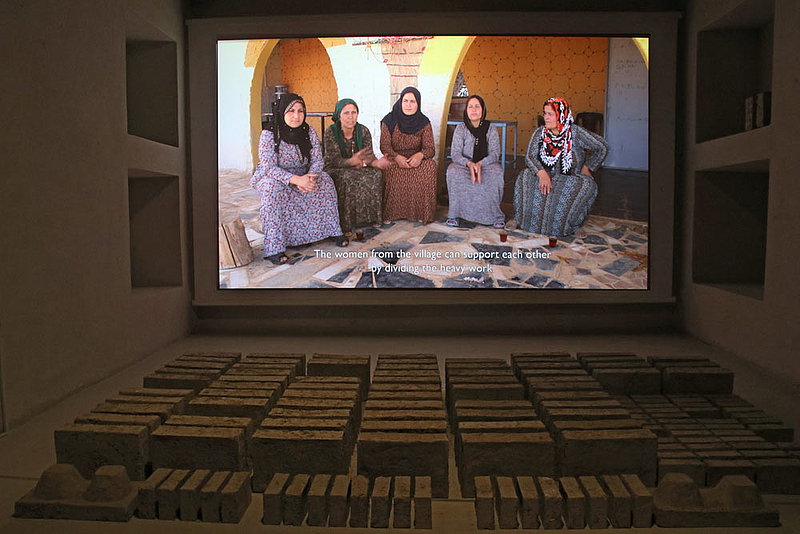 Marwa Arsanios' recent projects have revolved around questions of ecology, feminism, social organisation, nation-building, war and economic struggle. In her film Who is afraid of ideology? Part 1 (2017), the artist explores structures of self-governance that have been developed by the Kurdish autonomous women's movement communes. She participated in community reading groups and workshops in order to produce the film, which focuses on practical knowledge and labour that are passed on within the movement—how to use an axe, how to harvest fish considering their lifecycles, how to decide whether to cut down a tree or let it stand—practices that 'collectivise' the individual. Formal strategies used in the film, such as the separation of voice from image, lay bare the construction of the documentary and the deliberate organisation of information. Unlike many other films, Arsanios' film does not offer the appearance of seamless transparency or a depiction of 'how things really are'.

Arsanios' SB14 commissioned film, Who is afraid of ideology? Part 2 (2019), and the accompanying installation continue her research into Jinwar, a women-only village in the north of Syria, and extend her work to a farming cooperative close to the Syrian border in the Lebanese Bekaa Valley. The Lebanese cooperative has created an informal, NGO-like structure that has become a safe space for Syrian refugee women. Through the prism of these two communities, the artist expands her investigation into the ways the land has been reappropriated by the autonomous movement in Rojava after 2011. Critiquing the top-down construction of state and party ideology, Arsanios' study of feminist approaches to organising a communal life with nature and non-human species proposes a way of decentralising the role of the human mind as the primary actor in this process.