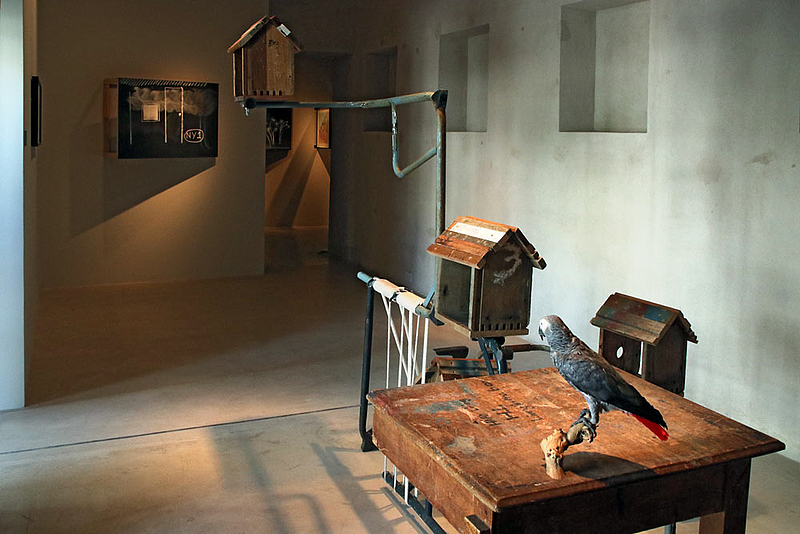 In his sculptures, drawings and videos, Kemang Wa Lehulere often excavates the recent past that has receded from view or resides just below the surface of collective memory. In SB14, the artist's suite of projects approaches learning and remembering as vital, generative processes, presented in opposition to those developed for collection-building and canonisation.

In My Apologies to Time (2016), Wa Lehulere converts old primary school desks into a series of birdhouses connected with steel pipe. Recalling the African Grey Parrot's ability to mimic human speech and the calls of other animals, the artist draws parallels between the parrot's simple mimicry and ways educational institutions function as ideological instruments that condition thought and behaviour. As spaces of both domestication and enclosure, the birdhouses model the inherent tension between safety and captivity.

In two related works, Wa Lehulere examines the legacy of artist Gladys Mgudlandlu (b. ca. 1917, Cape Town; d. 1979, Cape Town), affectionately called 'Bird Lady' due to her frequent painting of the birds in her township. Active in the 1960s, she was the first Black female artist to show regularly under apartheid. In Does this mirror have a memory (2015), Wa Lehulere asks his aunt Sophia Lehulere, who visited Mgudlandlu's house as a child, to recreate the elder artist's paintings from memory. These chalk works are juxtaposed with originals, which were purchased by Wa Lehulere at auction, materialising a chain of collective dialogue and authorship. Wa Lehulere's video The Bird Lady in Nine Layers of Time (2015) documents the process of excavation, in which layers of paint and plaster are chipped away to reveal Mgudlandlu's original murals on the walls of her house. Here, Wa Lehulere has enacted a conversation with the deceased artist by threading together her work and stories collected from myriad sources.