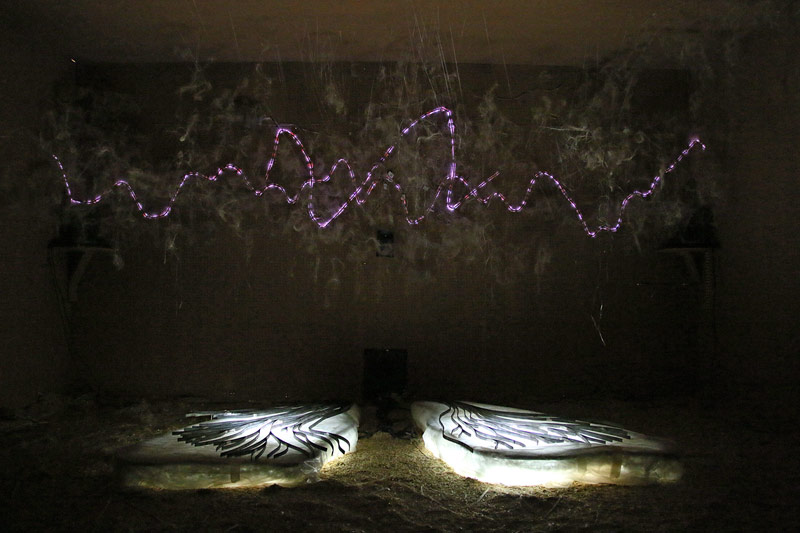 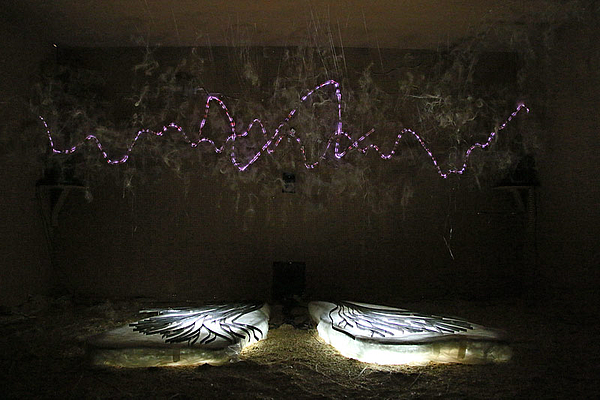 Central to Em’kal Eyongakpa’s practice is the quest for negotiations between ‘life’ sciences, art, ‘juju’ and technology, with interwoven installations, performances and soundscapes that not only blur the boundaries between employed media but could also alter notions of the real and the illusory. He approaches ideas of the experienced and the unknown, as well as the collective, through a ritual use of repetition and transformation.

Rustle 2.0 (2016) is a ‘multimedia transcription’ of a living ecosystem. Drawing on the attribution of intelligence by cybernetics to non-human actors, Eyongakpa’s audio recordings of the Congo Basin and Amazon rainforest biomes as well as those that register outside incursions—such as chainsaws, falling trees and air traffic—convey an asynchronous sensation of space. The composite soundscape is then synchronised with LED lights, creating rhythmic visual patterns, and custom-built wall structures composed of plant fibres that are held together by biopolymers (mycelium filaments) and mycelium, the vegetative part of a fungus composed of a network of fine white filaments (hyphae). The strings of light are reminiscent of electrocardiograms or stockexchange feeds—representational streams of real-time information—that are hooked up to an interface that also controls Breathe II (2013). This sculpture at the core of the installation simulates patterns of inhalation and exhalation as well as rest and is linked to electromagnetic levitation devices and the ambient diffusion of light through a density of fibrous material akin to tropical vegetation growth. Taken together, the installation animates an exhibition space populated by sentient existence channelled through mediated forms.
(From the SB13 Guidebook)