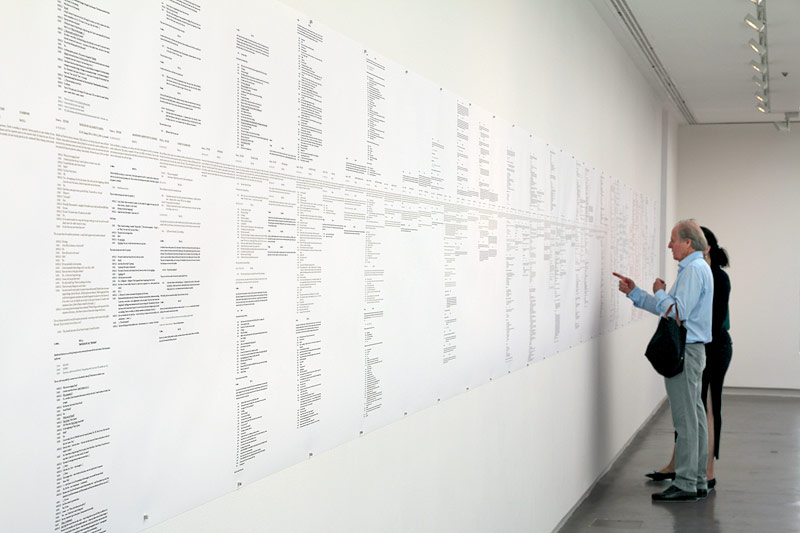 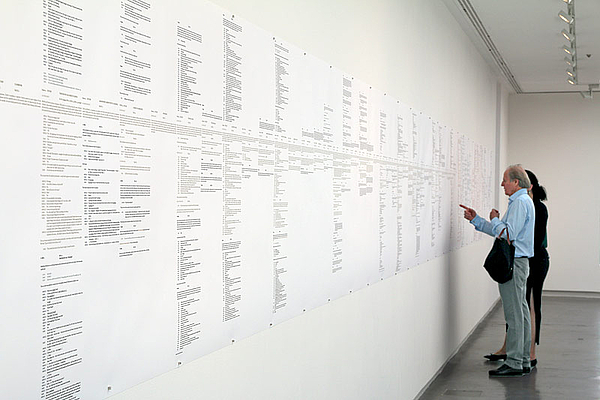 There never was a script for And the living is easy (2014), Lamia Joreige’s feature film that was shot in Beirut intermittently over an eight-month period in 2011 and developed through improvisation with mostly nonprofessional actors. ‘And the living is easy – Variations on a film’ (2016) questions the making of the 2014 feature, reconfiguring its materials, space and duration in the exhibition space in three parts: Score I, II and III.
Joreige’s SB13 presentation Score I – The script is a 15-metre-long typescript that evokes a musical score, replete with layers of symbols, typographic variations and colour-coded annotations. Through it, the artist uncovers the significance of retroactively transcribing a text that did not exist as a script, thus reversing the process of filmwriting. To obtain financial assistance for the project, Joreige transcribed fragments of the film at various production stages. Four years later, she wrote the final cut into script form to get a shooting permit a posteriori and then a screening permit from the General Security’s censorship committee. She could not apply for a shooting permit, because the law lacks provisions relating to this type of film (neither a documentary nor a work of fiction).
The image-text Score I – The script is a document written after the work of shooting and editing, which materials it traces, while underling the endeavour as a creative act. Transcription is subjective. What should be kept? What should be discarded when translating an image? Here, the image becomes text, and the text, through graphic enunciation, becomes in turn an image through which one can ‘read’ the entire film—its intentions, fabrication and various interpretations.
(From the SB13 Guidebook)