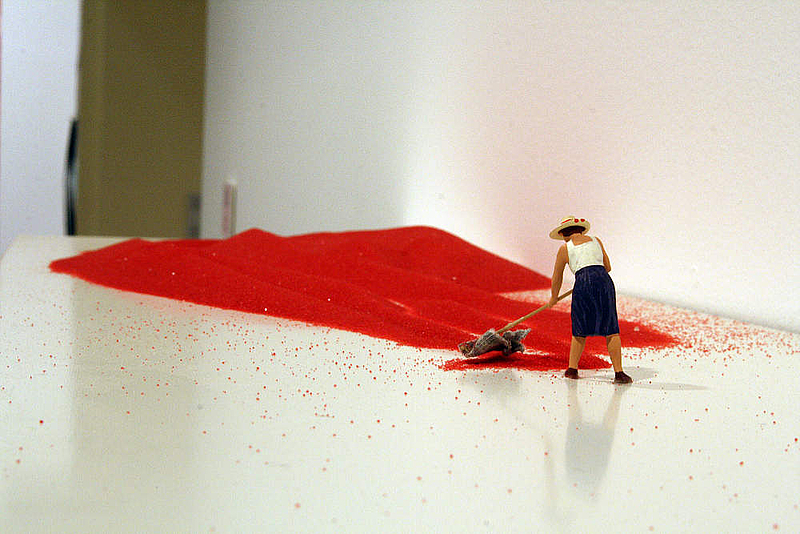 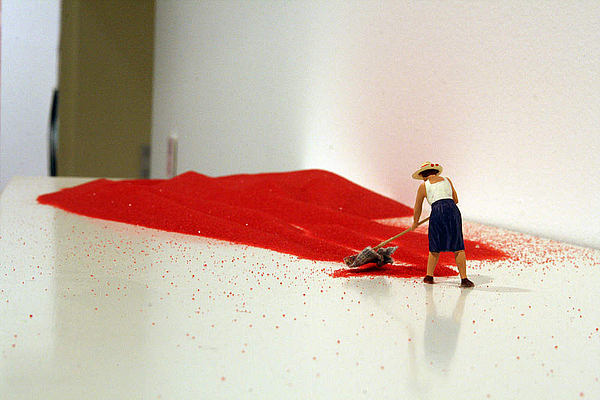 Situations with Levitating Rabbit. 2008
Installation - see the sliding images above

Forced Labor (Red Sand) follows a series of the artist’s installations that display miniature figurines undertaking everyday yet seemingly insurmountable tasks. The installation at Sharjah Biennial 9, set up on a shelf, featured the figurine of a lady sweeping a mass of red sand. Captured in the middle of her work and confronted by an immensely disproportionate job, the woman’s predicament can be related to real life. Viewers are lured into placing themselves in the position of the fated worker.

Liliana Porter’s work often utilises toys and figurines that she finds in various flea markets and stores. She creates scenes and narratives that emphasise the human and therefore potentially real dimension of the figurines. Often combining elements of humour and distress, she implies through these mini fictional worlds an uncomfortably recognisable reality.

Situations with Levitating Rabbit is an assemblage on multiple canvases that depicts a series of incidents, or ‘situations,’ which occur both in and on the surface of the wall hangings. A small figurine, a recurring element in Porter’s practice, stands on a shelf attached to the canvases and appears to be going about the impossible task of winding up a huge muddle of tangled string.

With various miniature objects attached to the surface of the canvases, the work appears to be depicting scenes of destruction and chaos. As Porter states: 'There are catastrophic situations that look like tsunamis where objects, people, tools, furniture of various sizes seem to be floating or submerged [...] There are characters that destroy and others that seem to clean up or try to repair things. We discover various holes in the canvases that are produced by a tiny man with an axe that is standing on the last panel. On the third panel there is a drawing of a ‘levitating rabbit,’ oblivious to whatever is happening around. Further to the right, there is a sitting person staring forever at a bright jewel.'