Sharjah enters the eye of the art storm

"It's all quite strange," one Emirati student confided. "But I think I like it." This turned out to be a typical reaction to the highly contemporary sixth Sharjah International Biennial. The efforts of Biennial director Hoor Al Qasimi, the support of her ruling family, and the work of London-based curator Peter Lewis had paid off: this was without doubt the most ambitious contemporary art event ever staged in the Gulf, possibly the Arab world. Against the backdrop of war in Iraq, and a sea of event cancellations in the Gulf, the month-long show brought together work by 117 artists from 25 countries. Incredibly, around 100 artists arrived for the openings on April 8 in the cavernous new Expo Centre and traditional Art Museum.

Sharjah is the most conservative of the UAE’s federation of seven emirates, dominated by oil-rich Abu Dhabi; in this, and its enthusiasm for art and culture, the city is a sharp contrast to the rampant commercialism and shiny high-rises of neighbouring Dubai, the tourism and business hub. Sharjah’s five previous Biennials have tended to concentrate on local and traditional artforms, especially painting. There are few public spaces to show art in the UAE, and artists often resort to exhibiting in shopping malls and offices. The few commercial galleries tend to feature tourist-oriented watercolour or oil landscapes. Within the Middle East, Bahrain and Amman are emerging, Beirut and Tehran have burgeoning art scenes, and Cairo an occasional biennial, but otherwise, the opportunities for contemporary artists to show ‘at home’ is limited.

All in all, the determination of Hoor Al Qasimi to reposition Sharjah alongside new contemporary art capitals such as Havana and Gwangju is remarkable. ‘My inspiration was actually Documenta,’ said the 23-year-old daughter of Sharjah’s ruler, ‘but I just didn’t expect to the [Sharjah] Biennial to be on the scale it is, I can’t quite believe what we’ve done here.’

Sharjah Biennial had all the hallmarks of an international contemporary art event, from a doorstop tome of a catalogue packed with artspeak to a minimalist café, via ‘bizarre’ performance art on the opening night. Local gallery visitors nervously avoided Motoko Ohinata’s ‘Rabbit Person’ nibbling a carrot on the Museum stairs, but delighted in Tatsumi Orimoto’s breadman performances. 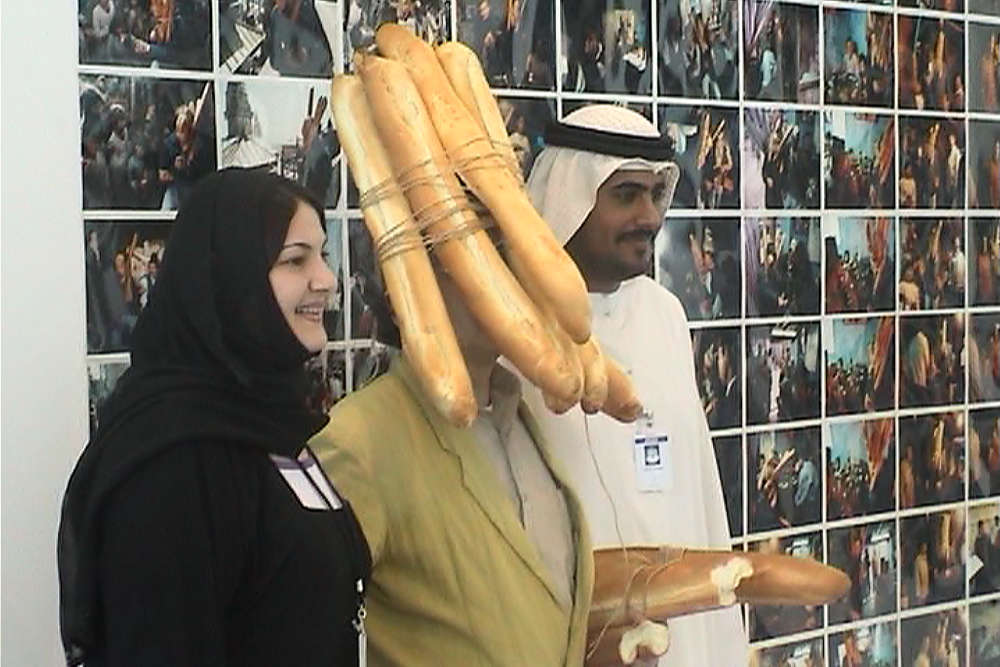 Following recent international art traditions, it was video that hit the headlines, from Masharawi’s docos of the Intifada to Kentridge’s animated drawings. Palestinian film-maker Rashid Masharawi was commissioned to produce a new work especially for the Biennial. This was a wise move: his three-part ‘Shahrazad’ is an exceptional, unsettling portrait of the tension of daily life under occupation and as a refugee. Appropriately, he was rewarded with a Sharjah Art Prize. Art world darling William Kentridge also took home a major prize for his rich, animated films critiquing Apartheid and post-Apartheid South Africa. (His countryman Zwelethu Mthethwa also turned in admirable work.)

Other artists awarded by the panel included young British sculptor Jim Coverley, who was discovered by Hoor Al Qasimi at his London degree show two years ago, and UAE artist Mohammed Kazem, whose photography was everywhere, gracing most marketing material and the cover of the Biennial catalogue. The young Emirati made an ideal exhibition poster boy. His colour-saturated autobiographical photos explore the local’s relationship with his ever-changing environment.

Moving slightly further afield, Wejdan Salem Almannai's canvasses packed with pins definitely bore out her desire to make ‘a concentrated sphere of slow pain’. She is one to watch. Pakistani artist Zain Mustafa was lucky enough to have his clothes line of 21 kurtas signed by Sharjah’s emir. The art-loving Dr Sheikh Sultan bin Mohammed Al Qasimi added ‘Silence the canons’ to the peace graffiti covering the torn traditional clothes.

Despite the plethora of artistic and political influences, it is possible to pull out a number of thematic strands. As befits shifts within the international art world, the Biennial had a strong Asian presence, spearheaded by the highly intelligent and engaging art of Tatsuo Majima.

Some of the most successful displays thoughtfully reacted to unfolding political events: Iranian-American Taraneh Hemami normally exhibits her old photographs printed on blocks of layered, mirrored glass in patterns on the gallery wall. For the Biennial, she filled her booth with a pile of rubble and inserted the blocks into the scene of war-like destruction. The images were donated by Iranians living in the US: each was a precious, vulnerable block of memories.

Other artist’s exhibits were tightly-curated displays of their own. Londoner Chris Grottick had the advantage of showing in the Museum a few years before: he designed a stunning video piece especially for the end of the long corridor. Upcoming German artist Klaus Fritze filled his space with thousands of newspaper clippings – faces snipped out, obsessively sorted and displayed in test tubes, on stalks and forks or hanging from clothes pegs. His overwhelming media museum was highly appropriate given the current glut of news from the Middle East. Sharjah-based Palestinian photographer Tarek Al-Ghoussein pulled out all the stops with his huge lightbox photographs, displayed in their own darkened mini-gallery at the Expo Centre. Autobiographical, the images document the artist in the UAE and Jordan, dressed in the emotive and highly symbolic kaffir. 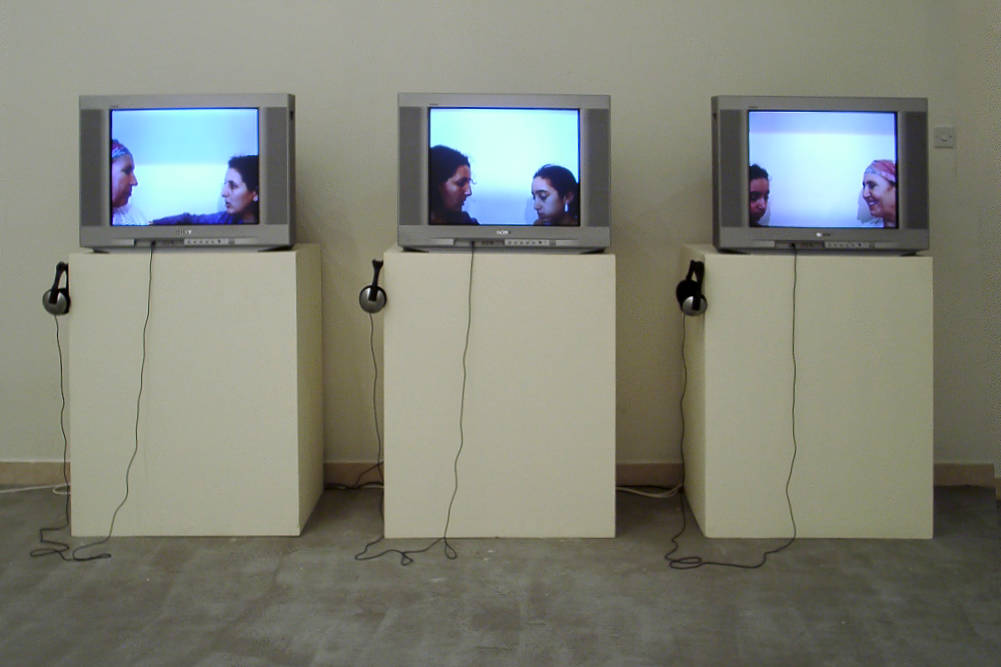 London-based Zineb Sedira's exhibition included a poignant, subtle set of photographs of her grandmother’s house in Algeria, accompanied by the immediacy of a three-part video piece. On separate screens, grandmother, mother and daughter spoke to each other in Arabic, French and English respectively, unflinchingly never seeming to understand one another. ‘That’s our lives!’ exclaimed a Dubai-based Jordanian-Palestinian colleague. Simply, directly, movingly, Sedira encapsulated the émigré experience. Among the many other artists examining ideas of nationhood and diaspora, Briton Beth Derbyshire’s installation ‘Babel’ also stood out as warm and thought-provoking.

Other artists’ work just fitted seamlessly into the Gulf environment. Iranian hotshot Farhad Moshiri's cabinet of gold-plated trinkets (Mickey Mouse, mobile phones, porcelain figurines and so on) was an urbane wink at kitsch consumerism. The inspired installation found its natural home in the UAE, the place where, as AA Gill once wrote, ‘malls go on holiday’. Santu Mofokeng's stunning photographs of advertising billboards in South African townships again delved deep, beyond a simplistic reading of consumerism. Another Iranian artist – Seifollah Samadian – also stole the show with his subtle and beautifully-composed video of a black chador-clad woman meandering, seemingly lost, in the white-out of a Tehrani snowstorm.

Beirut’s artist-theorists Jalal Toufic and Tony Chakar added intellectual weight to proceedings at the exhibition and symposium, where some fascinating papers grounded the work in the context of the Arab world. Unfortunately the debates were not widely publicised and attendance was low.

Against all this up-and-coming talent from the Middle East and its diaspora, the inclusion of time-honoured artists such as Christo and Jeanne-Claude – represented by photographs of famous site-specific projects from the 1980s – seemed almost redundant.

Despite the overwhelmingly enthusiasm from the visiting artists, a few gripes emerged. For some, installing work turned out to be a traumatic process, and on opening day, a few pieces remained unfinished. The curators’ theme of ‘new aesthetics, new practices’ was underdeveloped in parts. But these points are minor.

Sharjah is now on the world stage when it comes to contemporary art. Artists, and the few curators and gallerists that made the trip, agreed that the exhibition competed easily with more established biennials, and that showing their work in Sharjah was an enriching experience. Local audiences were ‘fresh’ to the work, many were viewing and appreciating it free of artworld theories or context. Returning to the show near the end of its run, the Museum was still attracting visitors, especially local women, some returning several times to absorb the shock of the new. The curators had a bold vision and were wise to include ‘censored’ work, even if it could not be openly displayed. (An obvious example was the collection of S Chandrasekaran’s cycle-of-life drawings: many of the small frames were flipped over, leaving it up to the viewer to peak at the image behind.)

Sharjah Biennial has the capacity to build on its reputation for grand forward-thinking and become the preeminent showcase for art in the Middle East, even if the centres of creation remain Cairo, Beirut, Tehran and – for diaspora artists – London and Paris. If the Biennial can cement its status as the pacemaker of Middle Eastern art, it could distinguish itself from other artfests and become a one-stop-shop for curators interested in the Middle East. Cynical or not, current political events have created a new thirst for complex visions of the region; many of the artists highlighted in the Biennial tell an alternative story to that of bombastic news reports. Perhaps spring 2003 will be remembered as the launch of a new era in contemporary art in the Gulf.

(Published first in 2003 by Universes in Universe)