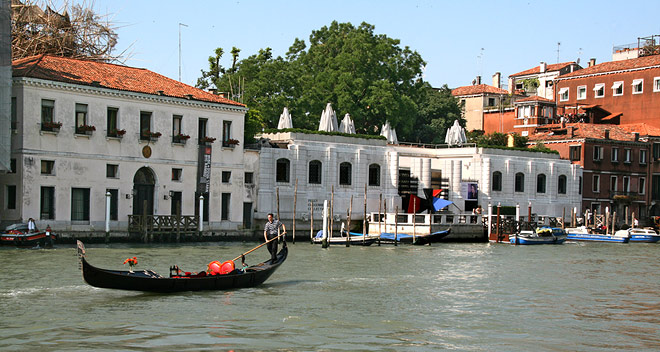 The collection is housed in the Palazzo Venier dei Leoni, an 18th-century palace designed by the Venetian architect Lorenzo Boschetti. Originally planned as four-storied building, it is unfinished, for this reason it has an unusually low elevation on the Canal Grande.

The collection at the Palazzo Venier dei Leoni is principally based on the personal art collection of Peggy Guggenheim. As an art collector, and also a gallerist for a while, she was closely connected to the artistic avantgarde of the 20th century in the USA and Western Europe.

The museum also exhibits works of art given to the Solomon R. Guggenheim Foundation for its Venetian museum since Peggy Guggenheim's death, as well as long-term loans from private collections:
- Hannelore B. and Rudolph B. Schulhof Collection (80 works of Italian, European and American art of the decades after 1945)
- Gianni Mattioli Collection (26 masterpieces of Italian Futurism, and early paintings by Morandi).
The Patsy R. and Raymond D. Nasher Sculpture Garden and other outdoor spaces presents works from the permanent collections, as well as sculptures on temporary loan from foundations and private collections.

(From information by Peggy the Guggenheim Collection and other sources)